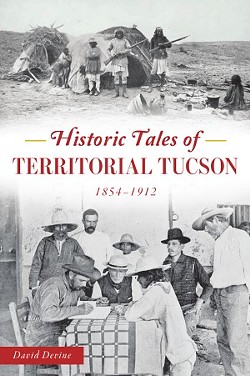 Devine came to Tucson in 1973 to attend graduate school at the University of Arizona, where he earned a master's degree in urban planning. His experience documenting Tucson's history began in 1995 when he started writing historical articles for Tucson Weekly. Nine years later, Devine published his first book about the building of the second transcontinental rail line. Devine then published his second book, Tucson: A History of the Old Pueblo from the 1854 Gadsden Purchase, in 2005.

Historic Tales of Territorial Tucson emphasizes some of the lesser-known personalities, trends and events of early Tucson. Some of these include the eccentric proclaimed remedies for snakebite wounds like cigar smoking and baking soda, the early history of bicycling in Tucson and celebrations of statehood and culture. According to Devine, the book is almost exclusively based on newspaper clips from the period.

What drives your passion for communicating Tucson's history to the public?

I think we could learn a lot about our current situation if we look to the past for themes that have developed in this community over time. One of those themes is we're a very diverse community, which likes to celebrate our diversity and we've been doing that since the Gadsden Purchase. That's one of our strengths. One of our weaknesses is, we've been dominated by European American men who initially were strong supporters of the Confederacy, lobbied for and made Southern Arizona a confederate territory—which a lot of people don't know about—and that mindset of the European American male dominance is still somewhat existing in this community.

From the very beginning of the book, you compare history to a jigsaw puzzle. How does viewing history through this lens encourage a better understanding of trends and how to go about the future?

A lot of people look at one factoid as indicating trends and obviously, a trend-line is not developed by one point. You have to step back and view a much broader picture to see the path that's being taken by a community or society. That's where a jigsaw puzzle comes into play, that to see the picture you have to stand back from it and take a look at the whole thing. My view is, currently people who talk about Tucson, we have our boosters who like to always talk about the good things and then we have others who say, "Well, let's take a look at our poverty rate." And that's part of who we are, and we're one of the poorest communities in the United States. So that's got to be part of the jigsaw puzzle of what Tucson is, but that doesn't mean we're a bad community, it just means we're poor. I think we need to recognize our strengths but we also need to acknowledge our weaknesses and say, if we're going to improve, we have to take a realistic look at all of this stuff.

What are some of the main messages you look to portray about Tucson's history in this book?

I think our history is important to know because while some people for instance, want to hide our confederate history, I think that's very important for people to understand. The European men who came here were confederates and supporting slavery and that was part of who we were as a community. On the other hand, we also were a community that was one of the strongest supporters of women's suffrage as statehood approached. So we have to know this stuff about our past to say, this is why, in part, we are where we are today.