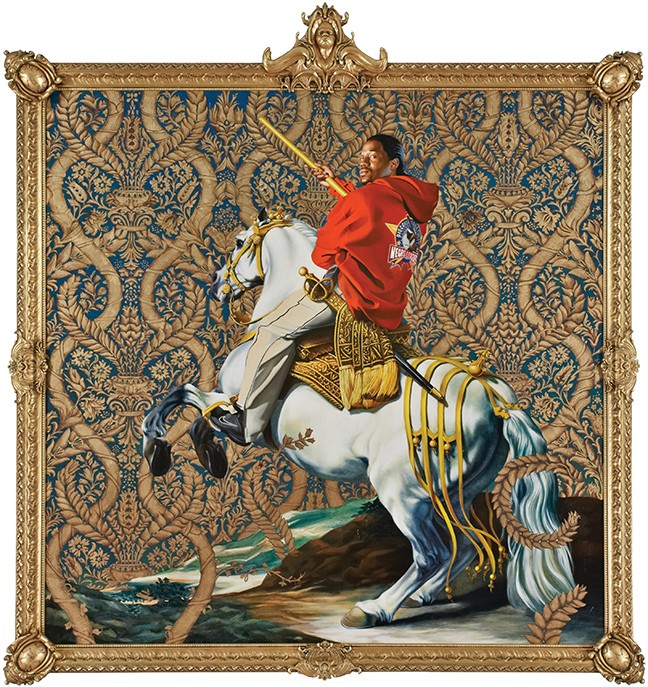 In 1636, the Spanish painter Diego Velázquez painted a heroic picture of Count Duke Olivares astride a bucking horse, against a backdrop of stormy skies and billowing wind.

In 2005, the American artist Kehinde Wiley painted a heroic picture of an African-American man nobly astride an almost identical bucking horse. But instead of shiny armor, this horseman is dressed in a red hoodie and sneakers.

Wiley, lately acclaimed for his portrait of President Obama, now hanging in the National Portrait Gallery, has made a career of painting unknown African-American subjects into exalted art-historical settings. Challenging our conceptions of identity, he gives his painting of the man on the horse, now on view at the Tucson Museum of Art, the same title that Velasquez used: “Equestrian Portrait of the Count Duke Olivares.”

The man, of course, is neither duke nor count: Wiley finds his models in the streets of New York. The startling transition in this painting, from white noble to African-American New Yorker, lays bare the fact that the western art canon mostly ignores people of color. And the piece critiques the way we categorize people by race and class and wealth.

Would we notice the black man in the sweatshirt if he weren’t heroicized Old-Master-style? And would we be in awe of Olivares if he were wearing ordinary peasants’ robes? Not likely.

Another Wiley work, "Triple Portrait of Charles I," gives three black men in hoodies the royal treatment. Their portraits are framed in gold and the patterned background looks like a castle's lush wall hanging. The trio of paintings, says Dr. Julie Sasse, TMA's chief curator, were inspired by mug shots the artist found scattered on the sidewalk. He transforms the men's status—snd challenges our own biases—with a stroke of the brush.

The provocative Wiley paintings are a highlight of 30 Americans, a big new TMA exhibition that showcases some of the best art over the last 30 years by African-American artists.

The paintings, photographs, sculptures and mixed-media works by this stellar crew come to Tucson from the Rubell Family Collection in Miami. From artworks recreating the pain of slavery to up-to-the minute pieces about equality, gender and police violence, the exhibition is an exhilarating compendium of art we rarely see.

"This is huge for Tucson," says Sasse, who put the show together with chief executive officer Jeremy Mikolajczak, winnowing the selections down to about 45 pieces. And there are some huge names in the show, most notably that of Jean-Michel Basquiat, the New York street wunderkind who died at 27 in 1988.

Basquiat started as a graffiti artist in the East Village, refining a distinctive style that merged text, drawings and paint. His works lashed out at racism and economic inequality and by his mid-20s, he was a star. Last year, 29 years after his death, a Basquiat painting fetched more than $110 million.

The 1982 Basquiat at TMA, "One Million Yen," has a painted canvas loosely bound to sticks. Despite its simple color scheme and elegant composition, the work has a serious subject: the corporate profits gleaned from deadly asbestos and nicotine. A golden cross embedded in a heart weeps for the dead felled by these projects.

Kerry James Marshall, a Chicagoan out of Alabama, makes acclaimed narrative paintings of African-American life, painting black skin in grisaille (black charcoal). "Vignette #10," an acrylic on fiberglass, is a placid rural scene of a woman and man holding hands under a pretty tree, perhaps based on memories of Marshall's southern childhood. The only color is the pink of the hearts floating above.

Marshall's prices have shot so high (a recent price tag was $21 million) that the mayor of Chicago is threatening to raise money in these tight times by selling off one of Marshall's public works. The scheme would remove the sweeping mural, of black children enchanted by books, from the walls of a library in a poor African-American neighborhood.

The late Robert Colescott, a UA professor and Tucson treasure, made colorful expressionist canvases that once won him the prize of representing the U.S. at the Venice Biennale. His 1987 "Pygmalion" reminds us of how great he was. Colescott had a critical edge, but his satire was beautiful. His acrylics are tactile, his colors bold and his strokes wild; so are the figures that crowd his painting, a reworking of the Greek myth about an artist in love with his own art.

Nina Chanel Abney, a Chicagoan transplanted to New York, tackles the volatile subject of police violence in "Class of 2007." The sprawling, masterly canvas pictures Abney and her white high-school classmates, but there's a catch. Abney, a black woman, is transformed into an armed white cop with blonde hair. Her white schoolmates are all painted black. The switch here is startling as Wiley's royal flip-flops.

Threads of history and tradition are never far from the surface in 30 Americans. The most wrenching works brilliantly trace the legacy of slavery and Jim Crow. Carrie Mae Weems, a child of the Civil Rights era, reworked found 19th-century photo portraits of slaves, taken by a pseudo-anthropologist bent on proving the inferiority of black people. Weems added a red glow to the nude figures and applied text to the surface, creating a conversation with these silent subjects.

Leonardo Drew, raised in the projects in Connecticut, educated at Cooper Union, created a large-scale wall of cotton bales, row on row, evoking the crushing labor of slaves and sharecroppers in the days when cotton was king.

And in a secluded gallery, Gary Simmons' "Duck, Duck, Noose" is a haunting reminder of the lynch mobs that slaughtered thousands of African Americans in the time of Jim Crow. Nine stools are arranged in a circle; atop each one is a pointed Ku Klux Klan hood. Dangling from the ceiling, in the center of the hoods, is a noose, ready for its next victim.

This article has been updated to properly attribute the correct inspiration for "Equestrian Portrait."