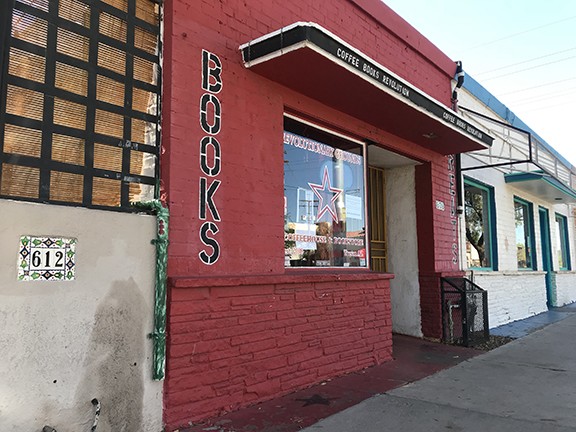 Revolutionary Grounds Coffee and Books, the small storefront on Fourth Avenue near the corner of Fifth Street, closed its doors on Sunday, June 17. But a revival may be on the horizon.

Often invisible to the average tourist, the store's red brick walls housed a vibrant local community for the past decade. The place has a collection of leftist and progressive books that are sourced and sold by the owners, Joy Soler and her husband, attorney Paul Gattone.

You can find paperbacks about Marxism, sustainable food sourcing, feminist memoirs, the Civil Rights Movement and much more stacked on the shelves, adjacent to a comfy seating arrangement with faces of famous activists accenting the wooden tables.

Soler received a letter earlier this month from her landlord, Andy Fried, announcing that their rent has been increased, again. The monthly bill has risen to a point where her family can no longer afford it.

"He wants us out, so he told us if we leave by the 30th he'll forgive one month's rent," she said.

Soler and Gattone have spent the last decade building up their business at 606 N. Fourth Ave. She told me they have been paying on a month-to-month basis, and although Fried has been slowly raising the rent in the last couple of years, it has never been this drastic until now.

Fried, who also owns the connected buildings where Tallboys and Myztic Rootz are located, told the Weekly he increased the rent because Pima County increased the value of the property, and therefore his property tax.

Soler's regular customers are understandably upset about this news, which she announced through the store's Facebook page a few weeks ago. Revolutionary Grounds hosts a lot of niche community events and outreach activities that can't be found elsewhere.

"A lot of people feel like [Revolutionary Grounds] is a safe space on the Avenue for folks who don't have many safe spaces to go to," she said.

At their last open mic poetry reading, which happens every second Friday of the month, Austin Thacker stood at the front of the room and told the intimate group he wished to have met them when he was telling a happier story. His poem was about a life-long friend who recently died as a result of mental illness. He was calm and deliberate as he delivered each line.

Afterwards, Thacker told me this was the first poetry reading he's ever done, but writing has always been an escape for him. Before he jets off to Grand Canyon University this upcoming fall, he hopes to return to Revolutionary Grounds at wherever their new location may be.

Soler is considering a reopening in South Tucson, at a place where they can potentially separate the cafe and bookstore into two buildings that live across the street from each other. This option means the shop would be closed for several months, so she is still actively looking for the best route to take.

"This is our only location; it's not like we have this, that and the other thing," Soler said. "This is it, and it's a labor of love."

Soler appreciates the support her family has received from the community so far, but is still overwhelmed by the work that lies ahead. On top of owning and managing the store, Soler has two young children and takes care of two elderly family members.

Soler has renovated and repaired the shop on her own dime over the last decade. She's especially going to miss the garden that thrives behind the store; it's been her oasis, she says.

Fred Ronstadt, the executive director of Fourth Avenue Merchants Association, said despite these recent events at Revolutionary Grounds, the population of locally owned businesses is stable. To his knowledge, Soler is the first business owner on the Avenue to be priced out of her space by a landlord.

If Tucson residents don't want to see other independent business folding, Ronstadt said they should come down to Fourth Avenue and support the merchants.

Mike Peel is the Southern Arizona director for Local First Arizona. His nonprofit promotes local businesses in the state and advocates for a strong local economy. He believes businesses like Revolutionary Grounds can't survive without the community's support.

Peel said shopping local also creates a multiplier effect. Independent businesses spend their money in the local economy and they tend to utilize local suppliers, so there are secondary and tertiary jobs created from these relationships.

Peel said promoting "smart growth" in the economy and practicing localism are the most important things to work towards in the future. Growing and expanding the economy is a good thing, but it needs to be done with small independent businesses in mind so they don't get shut out by national chains with deep pockets. Supporting local business has a ripple effect across the local economy.

"Up to four times more dollars stays in our community when we spend it at locally owned independent businesses compared to chain businesses," Peel said.

Soler said she was worried about the future of independent businesses on Fourth Avenue.

"Fourth Avenue is very eclectic; at least it has been until now," she said. "It's not luxury stores, it's not chain markets, it's very eclectic, small, individually owned businesses, and I think the folks who are looking to rent the luxury student apartments are looking for a different kind of shopping experience. And maybe that's what's going to come."

To find updates about the shop's relocation and fundraising efforts, go to facebook.com/Revolutionary.Grounds.

Kathleen Kunz is a University of Arizona jounalism student and Tucson Weekly intern.