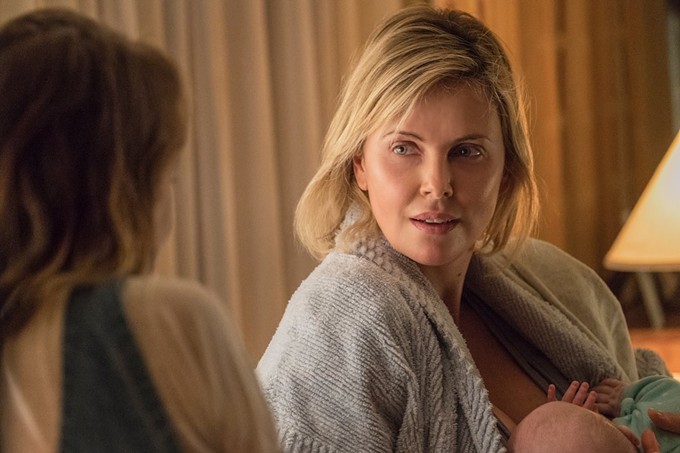 The hardships faced by a woman raising children while giving birth to another—with little help from the dad—are given the Diablo Cody treatment in Tully, the second time screenwriter Cody, director Jason Reitman and actress Charlize Theron have joined forces.

They worked together before on the caustic comedy Young Adult, and this one makes that movie look like an ice cream social party featuring bounce houses and unicorns. (For the purpose of this analogy, the unicorns would have to remain outside of the bounce houses to prevent people from being impaled on their majestic horns.)

Theron is all kinds of magnificent as Marlo, a mother of two getting ready to give birth to her third, and getting her ass kicked physically and emotionally. Her husband Drew (Ron Livingston), while not complete scum, should probably take off the headphones at night and go the extra mile to help keep the household in order and his wife sane. Their young son Jonah (Asher Miles Fallica) has been dubbed "quirky" by his school and finding a new one has become an unwelcomed priority. Daughter Emmy (Maddie Dixon-Poirer) is slightly neglected, yet one of the more together people in the movie.

Marlo's well-off brother Craig (Mark Duplass) gets his sis a special gift: a night nanny to help with the baby and household chores so she can grab some sleep. After the baby is born, Marlo is reluctant at first, but finally relents and calls the number her bro has provided.

Tully (Mackenzie Davis) arrives like an angel in bohemian clothing and immediately helps with brightening Marlo's downer moods. She has instant, mother-like rapport with the new baby, miraculously cleans the house overnight, and even bakes cupcakes for Jonah's class. She also provides much needed friendship to Marlo, who has fallen out of touch with Drew and has become prone to snapping at people in public. In short, Marlo has been close to a meltdown in what amounts to a bad bout of postpartum depression. Tully helps Marlo rise above and power through.

The movie isn't just about a mother in need getting a helping hand. That would be mighty conventional compared to what actually happens in Tully. Cody has had two children since her scripting debut Juno, her first pairing with Reitman. For her sake, I'm hoping little of what Marlo goes through in her latest script is autobiographical. Marlo has it rough.

Theron makes physical and mental exhaustion totally enthralling, and the moments where Marlo can't take it anymore and lets the world have it are barnburners. Theron is a miraculous actress, and she gets a nice counterpart in Davis, who represents a sort of free spirit Marlo can't seem to muster. Davis does everything and more with her screen time. I'm doubting 2018 will give us many screen duos as captivating as this one.

I have a minor quibble. I feel that Drew gets off the hook a little too easy in this movie. Granted, dudes are let off the hook everyday by new moms taking on most of the blessed challenge of child rearing, but the last shot of Tully reeks a bit of overcompensation for the trials and tribulations that happened before it. It feels a little too cute.

There's no denying that the movie that happens before the final shot is one of the more brutally honest depictions of the challenges (and undeniable blessings) of parenting. Yes, the price paid is often worth the reward, but Marlo definitely gets put through the wringer here, and Theron makes her pain and struggle real.

She also provides laughter with the shocks and sorrow, further proving she's one of the greatest actresses to ever grace the screen. Reitman and Cody give Theron great stuff to work with and, once again, she's in Oscar-worthy form.