It's hard to believe that a man like Martin can't find better material than this. While he's always been prone to commercial trash (like the Cheaper by the Dozen and Father of the Bride movies), he used to show a fine sense of adventurism in some of his film choices (Pennies From Heaven, Bowfinger, The Spanish Prisoner).

With the exception of his Shopgirl in 2005, Martin has done nothing of special notice as an actor since 2001's Novocaine. He's shown up on movie lots, bumbled around and mugged like a fool in front of the camera, and taken home some big paychecks--and The Pink Panther 2 represents the absolute worst film of a storied career.

I counted one laugh in this movie ... one! That laugh escaped my bodice while watching a sequence in which Martin's Inspector Clouseau is being watched on black-and-white security-cam TVs, enduring a series of physical traumas. Martin gets run over by horses when he opens a stable door, and I giggled.

For the rest of the film, I sat stone-faced.

I'm not one of the folks who says the Pink Panther series had to die with Peter Sellers. I actually think Martin could've made a decent Clouseau, and I kind of liked him in the first film, even though the movie surrounding him was crap. However, with the sequel, I grew tired of his shtick before the opening credits rolled. The material he's working with is uninspired, and his performance lacks the wit and intelligence that have made past Martin films enjoyable: Here, he's just a goofball subject to recycled pratfall bits and stupid jokes deriving from his outrageous accent.

The plot is gibberish involving items like the Shroud of Turin, the Imperial Sword and the pope's ring, all being stolen by somebody called The Tornado. This leads, inevitably, to the sorry sight of Martin in a pope outfit, falling off a ledge at the Vatican while making a face. I can just see a writer/director discussion where they enthuse: "Let's put Steve Martin in the pope's hat with his Clouseau pencil mustache, and the laughs will fly like ducks happily exiting a lake!" This movie is more like geese tragically heading into the turbines of a jet, sending it into a downward spiral with no hero pilot to save it.

While Sellers' Pink Panther films got increasingly dopey, they did manage to retain a certain level of class and intelligence, even as they veered into the outrageous. (The Pink Panther Strikes Again was especially nuts.) The Sellers installments reached a low point when director Blake Edwards concocted Trail of the Pink Panther, utilizing deleted Sellers footage from previous Panther films and creating a story around that footage--essentially soiling the legacy of a great character.

To put things in perspective: The Pink Panther 2 is worse than Trail of the Pink Panther. It not only soils the legacy of a great character; it pukes all over it, kicks it in the teeth, attaches large weights and kicks the poor bastard over the side of the boat.

If Martin retired right now, he'd have a decent legacy of good films sprinkled among the trash. Hopefully, bad opening-weekend box-office numbers have put an end to his days as Clouseau, and he will find projects more befitting his talents. Donning that mustache for any future installments of this drivel would be a cinematic travesty in line with Eddie Murphy's insistence upon working with director Brian Robbins (Norbit, Meet Dave and the upcoming A Thousand Words). This madness must stop.

The Pink Panther 2 is not showing in any theaters in the area. 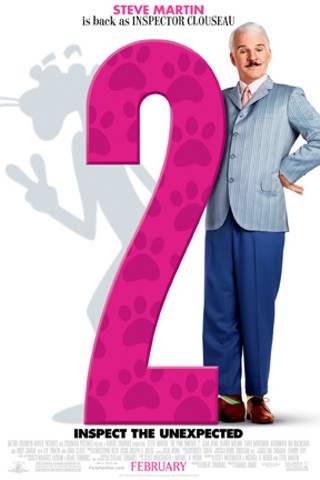