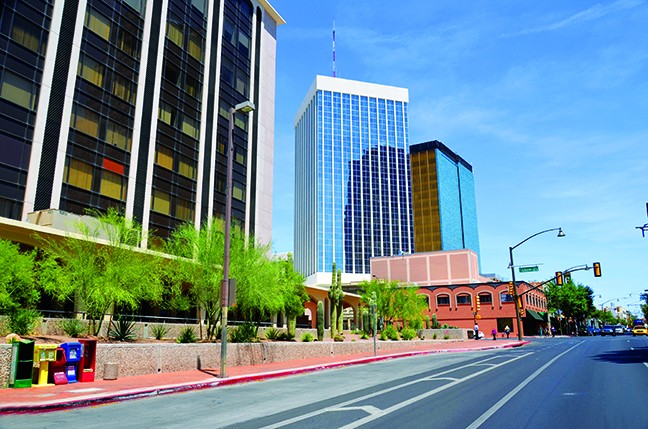 Pima County District 1 Supervisor Ally Miller hoped to deliver a new budget that did not include year-over-year increases in the primary and secondary property tax rates, but her efforts were squashed at last week's board meeting.

Miller's proposed plans would have halted increases in taxes for just one year, but created consequences for long-term initiatives, mainly a lack of funding for capital projects.

Fellow supervisors Ramón Valadez, Sharon Bronson and Richard Elías decided to vote against her and pass a $1.3 billion annual budget with a $5.5584 total county tax rate.

To create Miller's "property tax-neutral" budget, the board would have needed to cut $10.7 million from somewhere in the county's expenses. During budgetary discussions, Miller proposed cuts from a few different sources: the library district, the flood control district, and the operational budget—all of which were met with concerns from the other supervisors.

Miller's newest proposal intended to recover most of the funds solely from a hiring freeze on over 1,000 currently vacant county positions.

She hoped to convince her fellow supervisors that a property tax-neutral budget could be achieved while placing minimal burdens on the areas that received cuts.

She reasoned that low-income families could not afford to pay higher property taxes, which would also hurt businesses because consumers would have less money in their pockets to spend on goods and services.

"The process didn't work like I originally hoped it would work," Miller said at the meeting. "I was met with opposition and the analysis appeared to be conducted simply to discredit any proposals that I put forth."

The board held off from voting on the budget at its June 18 meeting to figure out potential options for tax neutrality. At the July 2 meeting, Miller asked for another continuation so that county finance staff and the other supervisors could review her newest proposal. District 4 Supervisor Steve Christy supported that idea.

But Bronson, who seemed supportive of her tax-neutral idea just two weeks ago, voted against her, saying there wasn't enough information or analysis that could be done before their Aug. 6 budget deadline to properly vet her proposal.

"I think what she has done is admirable and I would like to explore that for next year's budget, I'm just not willing in this year, without some more analysis, to move forward in that direction," Bronson said at the meeting. "I think there are some questions that are not answered, but I think it's a reasonable approach to budgeting and I want to applaud her for her time and effort that she put into this and her thoughtful consideration."

The main concern with Miller's proposed cuts was that it prevents the county from making progress with the new Pay-As-You-Go capital funding program, which intends to save up money from tax revenue to put toward future infrastructure projects and improvements.

"I think the point that we need to come back to is the fundamentals of this budget, and it was really the transitional budget from capital debt financing to Pay-As-You-Go," Pima County Administrator Chuck Huckelberry said at the meeting. "And you can't get there by holding your primary property tax rate below any neutral level. You cannot build the money you're going to need to pay for Pay-As-You-Go."

He noted that Pima County has the third lowest increases in primary tax rates out of the 15 Arizona counties, meaning 12 other counties are raising their rates faster than we are.

Valadez, who was also initially interested in supporting Miller's plan, seemed most troubled by how a stagnant tax rate would affect the PAYGO system.

"Even when we increase property taxes we try to be small and predictable as opposed to spikes because that's not something anyone likes, not our businesses, not our residents, not our homeowners," Valadez said. "If we try to achieve that property tax-neutral ... in my mind, we can't do that without elongating the PAYGO implementation period, and or have at least one, if not multiple, spike years."

When it came time for a vote, Democrats Bronson, Valadez and Elías were ready to approve the budget as is, with a last-minute addition from Bronson to cut all department budgets by 1 percent, which she estimates will result in about $3.5 million in savings from unrestricted funds to be used toward capital projects.

Republicans Miller and Christy voted against that decision, requesting more time for her newest budget proposal to be analyzed.

"I do feel that there is adequate time to get the analysis and to get the information and I don't feel comfortable voting on a budget for this year without exploring all of the options that have been discussed today at this board meeting," Christy said.

It is currently unclear how each of the county departments will enact the new 1 percent cuts, and what kind of effect they will have on county services. ■