I kind of like Justin Bieber. He's like a young Leonardo DiCaprio, the members of Hanson, Keira Knightley and Justin Timberlake, all rolled into one little cherubic pop star.

His new 3-D epic bio/documentary movie, Justin Bieber: Never Say Never, is a big, happy film that showcases his undeniable talents and tells the story of his rise to fame. It also, in its own little way, justifies his fame. He is quite good at what he does, and I consider him miles ahead of other pop phenomena (like the Jonas Parasites).

The movie tells his back story while treating fans to live, well-staged music numbers featuring some decent dancing. We get to see lil' Bieber on the road to his big, sold-out show at Madison Square Garden. (We also see footage of that concert throughout the film, which is a little confusing.) While the MSG footage is a kick (even if you aren't a major fan of his music), most of the stuff in this movie doesn't require 3-D technology; you could actually see the best footage from Never Say Never on YouTube years ago.

Bieber got his start on Twitter and YouTube, with his mom posting captivating videos of this little man singing up a storm. Let it be said that Bieber boasts some major pipes, and those pipes have soul. He's a real singer. I was struck by Bieber's ability to play the drums as a tyke, and one video where he strummed an acoustic on a city street while singing away was fascinating.

The music? Eh ... it's OK. It's bubblegum pop stuff at its most harmless. Some of the musical numbers feature special guests like Ludacris, Miley Cyrus, Boys II Men, Jaden Smith and Usher. (Usher played a big part in the rise of The Bieber, having been the first big "star" to notice him.)

I didn't know that Bieber was raised by a single mother in Canada who was only 18 when she had him. The movie shows him playing drums, guitar and piano—which he apparently taught himself, along with the trumpet. (However, he doesn't bust out his horn in the movie.)

All I really knew about him going into the film is that he has an admirable ability to laugh at himself. He was great in his sketch with Tina Fey last year on Saturday Night Live; he was also fun a few weeks ago with the Church Lady on the same show. The film even has some 3-D fun with his already- somewhat-legendary hairdo.

Bieber fans are shown definitely getting out of hand in this movie. There's footage of Bieber being attacked while riding on his scooter, and girls mobbing him onstage. They shriek with the same sort of hysteria that marked The Beatles' rise to fame. Now, Bieber is nowhere near the phenomenon that The Beatles were, but don't tell that to his rabid fans. They are liable to eat your face off.

If you like Bieber, you can't help but worry about him a little bit. He seems to have a good head on his shoulders, so here's hoping he's not going down the Michael Jackson road to fatal eccentricity. He seems to be aware of the pitfalls of fame, but if he starts running around with a baby chimpanzee, I'm calling the authorities.

I went to screening of this late on a Friday night with a friend of mine, and we were the only grown men in the theater. We were all prepared to goof on the movie, but we wound up enjoying it. Hell, we were the last ones out of the theater. We were a little sluggish walking into the parking lot because, it cannot be denied ... we had BIEBER FEVER!

Justin Bieber: Never Say Never is not showing in any theaters in the area. 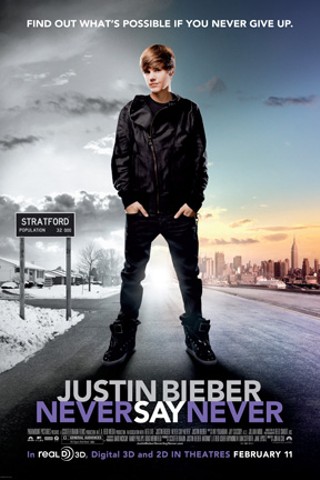