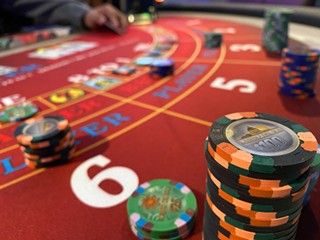 A new age of legal gaming has come to fruition for Southern Arizona casinos as Pascua Yaqui Chairman Peter Yucupicio symbolically shot the first round of dice on Casino Del Sol's new craps table at 9:30 a.m. on Wednesday, Aug. 11, five days after Gila River's Wild Horse Pass Casino in Phoenix was the first in the state to offer Las Vegas-style games.

While the chairman shot a nine on his come-out roll, he threw the dice off the table during his second turn, causing the stickman to check the bones once retrieved from the casino floor. Yucupicio said while he had not shot craps before that moment, he plans to learn and play the beloved game of chance more often now that it's available in the state.

In April, Gov. Doug Ducey signed the amended Tribal-State Gaming Compact which allows table games usually seen in Las Vegas like craps, roulette and mini-baccarat. The governor also signed House Bill 2772 into law, opening the door for sports gambling to start in September. While it only took a few months for all parties to agree on the compact's details, numerous Arizona tribes like the Pascua Yaqui, Tohono O'odham Nation and Gila River Indian Community have been working toward the goal of gaming expansion for several years, said Yucupicio.

"All the [Arizona] tribes started about this about six or seven years ago trying to figure out what we needed to do," Yucupicio said. "Once all the tribes sat down with the governor and hammered out all the benefits, not only to us but to the state, the process went pretty quickly."

The amended compact continues to follow the same profit-sharing model employed by earlier versions of the agreement, but the state is betting they'll increase their revenue from tribal gaming if these table games are a hit with casino patrons.

Under the compact, tribes operating casinos are on a sliding scale of 1 to 8% of their yearly gaming revenue to be shared with the state and surrounding municipalities, according to the Arizona Department of Gaming. Around 12% of that revenue goes to community service and public safety programs of cities and towns chosen by individual tribes, while the other 88% goes into the Arizona Benefits Fund.

In addition to a new craps table, Casino Del Sol also added a new roulette table and two mini-baccarat tables to their gaming floor. Yucupicio said he did not know off-hand what the estimated yearly revenue gaming tables could generate for his tribe, but said he believes the new games will benefit not only the Pascua Yaqui community but other tribes in the state and the nation trying to expand gaming operations.

"We are hoping this is very successful and helps our tribe and all of the other tribes throughout the country who are doing this now or are trying to. We fought for our right to have table games," Yucupicio said. "I think people don't understand a lot of this benefits our people. We can educate more and help seniors who suffered through the pandemic. I think it's a blessing how we can provide more."

The chairman said there's a good chance Casino Del Sol will add more craps, roulette and mini-baccarat tables in the future if they prove popular with the public.

Desert Diamond Casinos also opened a mini-baccarat table at their Sahuarita location on Monday and expects to open a second table at their Tucson location in the near future, according to Treena Parvello, director of government and public relations for the Tohono O'odham Gaming Enterprise. That casino is in the process of expanding its facilities statewide to make room for more tables and machines while it finalizes tests for craps and roulette, said Parvello.

"At our Tucson and Sahuarita properties, 70 brand-new gaming machines have already been installed and more than 140 additional gaming machines are coming, including many that will only be found in our casinos in Arizona," Parvello said. "To accommodate all the new options coming to Tucson, we have completely converted our Monsoon Nightclub into a gaming area."

Fry's Food and Drug employee John Taylor was Casino Del Sol's first patron to shoot craps at their new table. Taylor and his spouse typically enjoy rolling the dice while vacationing in Las Vegas, but now they won't have to travel so far to try their luck.

"This has been a long time coming. I'm excited about it," Taylor said. "I've been playing craps for many years. We used to play in casinos in California, but they use cards. This is actual dice."

Taylor said they don't often make the trip out to the casino on Valencia Road unless there is a show at AVA Amphitheater that catches the couple's eye. However, he said he expects to be a regular at Casino Del Sol now that one of his favorite games of chance is open for business.

By the end of his inaugural run on the new craps table, Taylor was up by $40.