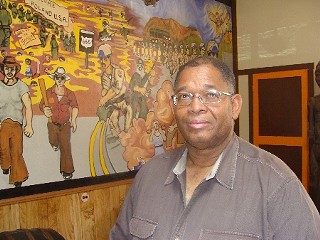 To meet Jeff Gaskin and get a tour of the union hall and Chase Creek Street, go to Clifton's website. I also recommend the Simpson Hotel in Duncan. Owner Deborah Mendelsohn has put together a great list of 100 things to do within 100 miles of Duncan.

A friend warned me as I took off for the eastern Arizona mining town of Clifton that I'd better not blink, or I'd miss it.

But isn't that the point of road trips—to take you to places you think time forgot to be reminded that interesting people live in those far corners, and that what we really need to do is to visit more often?

That was the lesson learned from my trip to Clifton, a three-hour drive east on Interstate 10 and U.S. Highway 191. I started out with one goal: to meet an African-American dentist with the federal prison in Safford who unknowingly became the caretaker of an important slice of Arizona's Chicano history.

While the road trip started out as a way to connect with history through Clifton's noted mural and its 1916 union hall, it ended up being a chance to meet a group of newcomers to Clifton who've bought and remodeled historic structures in the business district.

Dentist Jeff Gaskin bought the former Morenci Miners Local 616 Union Hall about 10 years ago. In the main room is a mural by Tucson artist David Tineo that's at least 25 feet wide and almost 10 feet tall. When a real estate agent took him to the building, Gaskin said, it was obvious the hall was in need of care.

"Parts of the ceiling were coming down, and there was water damage," Gaskin recalled during my visit. "I didn't know anything about the mural or the history, but I felt that I better buy this building in order to save it."

The mural is one of about 100 that remain out of the more than 200 murals Tineo created during his 40-plus-year career. It depicts the 1983-1986 United Steelworkers strike in Clifton and neighboring Morenci.

The union hall was the center of the strike, which still sparks anger from many Arizona Chicanos and union organizers. In 1983, then-Arizona Gov. Bruce Babbitt sent in the National Guard to break up the strike against Phelps Dodge, sending tanks and helicopters into Morenci to help strikebreakers continue copper mining production. That move earned Babbitt the nickname Bruce "Scabbitt."

I had a chance to spend the night in the old hall, which Gaskin has turned into his residence and a boarding house. When I arrived, Gaskin introduced me to a roomful of people sitting at tables with plates of food and glasses of champagne and wine. I learned that this scenario in the hall's large meeting room, with Tineo's mural looming, wasn't unusual. Someone joked with me later that Gaskin is the unofficial mayor of Chase Creek Street, where the old union hall sits with other historic buildings.

Gaskin told me he believes it's important to bring people together, so he hosts regular potlucks that welcome both newcomers and longtime residents who care about the town's history and future.

"I enjoy good company and conversation," Gaskin said. "It's wonderful when we get together and everyone brings a dish to share. You have a good story to share, and you like to laugh, you are welcome here."

I was introduced to Frank Gonzales (the father of Tucson artist Pancho Gonzales), who retired from Phelps Dodge. Gonzales went over the town's early mining history, which began in the late 1870s. He brought up the racism and the other struggles Mexican Americans experienced over the years with the mining companies, and eventually brought up the strike.

Gonzales looked up at the mural and recalled how difficult that time was. Because he was a supervisor, he crossed the picket line every day and continued to work.

"Even to this day, when you go to weddings, there are people who will sit on one side (who were) involved in the strike, and people on the other side who crossed the picket line," Gonzales said. "It tore the community apart."

John Lunt, another Phelps Dodge retiree, spends his free time taking photos of the area's bighorn sheep, fall colors along the San Francisco River, spring wildflowers, and mountain views along the Coronado Trail. Hunting, he said, is popular with many area residents, who go after deer, elk, bear and antelope. "Even bighorn sheep?" I asked.

"Yes, but I'd never shoot those. It would be like killing your dog," Lunt said, pointing out a photo he took of bighorns lying beneath a tree in a residential area of Morenci. It was published in a recent issue of Arizona Highways.

Lunt's wife runs the Greenlee County Historical Society museum just down the street. The museum covers the history of this part of Arizona, and even includes the childhood high chair of former Supreme Court Justice Sandra Day O'Connor, who was born in the area.

When the potluck ended, I got a tour of the Chase Creek Street historic district from Ray and Jeanette West. Like Gaskin, the Wests bought several buildings to turn into residences and use for their businesses. Jeanette sold their bed-and-breakfast in Flagstaff as Ray got close to retiring from the city of Tempe. He said his dream was to move to an old Western town in Arizona, and they fell in love with Clifton, especially the area along Chase Creek.

On one side of the street sits a building with their apartment and a vintage dress shop Jeanette runs. Across the street is an antique shop filled with Ray's collection of furniture, old tools and housewares. "It's everything we've collected over the years," Ray says.

We stop at the Clifton Armory, a gun shop owned by another newcomer and building renovator, Dave Riley. Riley owns a print shop in Mesa and, like Ray, he was interested in finding the next Bisbee—a Western town with history and potential. Riley and his wife bought several buildings and opened the gun shop, selling firearms from Riley's collection as well as new guns, ammunition and hunting licenses. Next door and above the shop is a bed-and-breakfast the couple is still decorating.

Riley pointed out a photo recently discovered in the town museum of the notorious Arizona Rangers. It was taken in Clifton in the late 1800s. Riley said he felt particularly lucky when he discovered the name of each ranger on the back of the photo.

Farther down the street is the Chase Creek Marketplace, where Susan Snyder sells works by local artists, salsa, handmade soaps and lotions, and locally made handicrafts. When we walked in, Snyder was busy with customers, but I noticed a series of Tineo's paintings for sale. Snyder says he comes to town often.

With interest in the area growing, neighbors have formed the Chase Creek Historic Association and started a website, visitcliftonaz.com, that highlights businesses and gives potential visitors a sense of Clifton's history as well as what to do there.

Back at the union hall, Gaskin took me out for another tour, driving his truck down to the San Francisco River, an idyllic setting where locals camp during the summer. Next, we headed to Morenci, to the copper mine where the first Morenci mining camp once stood. It's now just a memory.

That evening, I finally got a complete tour of the union hall, which is decorated with Gaskin's large collection of African art and paintings he's collected by an African-American artist from Cleveland. There's some Mayan art, and more paintings by Tineo scattered around—two are Day of the Dead dentists treating their patients. Over strawberry Häagen-Dazs and shortbread cookies, Gaskin shared how important it was for him to connect with Tineo and learn more about the mural.

Tineo, speaking from his Tucson studio, said he's always looked at Gaskin as a "guardian angel of history."

"It fell in the right hands, and because Jeff is so inviting, the doors are always open for people to visit and really enjoy. It's a constant open house for the community," Tineo said.

Gaskin said he meets people looking for the union hall almost every week. Sometimes they ask about the mural, and he always invites them in. "It's still important for a lot of people, and I never want people to feel that they aren't welcome."

Tineo said that, to him, the mural represents the resilience of the people who lived through the era. Because the strike was so divisive, some families remain divided, and strong emotions are still unresolved. "Maybe that's why they keep coming back," he said.

The next morning, the light coming through the window behind the union hall stage cast an interesting glow on the mural. It was quiet, but as I sat there looking at the mural's images of National Guard soldiers, picketers, Cesar Chavez and iconic steelworkers, all surrounded by Gaskin's collection of African and Mayan art, it made sense and felt right. I was thinking, "I want to come back."

After breakfast at PJ's Restaurant, Gaskin takes me back to Morenci, to the same spot where John Lunt took his photo of the bighorn sheep. There are no sheep today, but there is still much to see. Gaskin stops to show me how early mining families buried their dead by blasting gravesites into the rocky hillsides.

Driving out of Clifton, we stop at Three Way, a pit-stop store off U.S. Highway 191, to grab a Coke for a drive to Duncan, an agricultural community about 30 miles away where Gaskin's friend Deborah Mendelsohn owns the Simpson Hotel Bed and Breakfast.

Before ending the day with tacos at Los Mendoza in Clifton, there are final visits with Frank Gonzales and his wife, Lydia. Frank places in my hand a small scorpion figure he's made from copper wire.

We return to the old union hall, where I give Gaskin a goodbye hug, before I drive through desert and hills back home to Tucson.