Best in the West 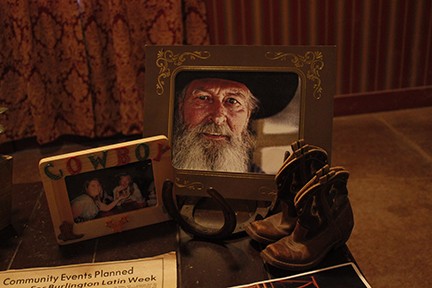 Emily Dieckman
Thorton “Mick” Willoughby passed away in September, after serving as the marshal of Old Tucson for 13 years.

Emily Dieckman
Mick Willoughby spent his life immersed in his many hobbies, which ranged from reptiles to reading to magic.

Tables in Old Tucson’s Grand Palace are covered in items to memorialize Mick Willoughby:
a certificate that declares him a member of The International Brotherhood of Magicians, photos of him with enormous snakes draped around his shoulders, his very first pair of child-sized cowboy boots. Barb Freese, an old coworker of Mick’s, picks up a small figurine of a wizard and says she can’t get over how much it looks like Mick.

It does. Part of it’s the long beard and dignified smile, and part of it’s the deep wrinkles
around the eyes (the wizard by design, and Mick from years of laughter and life). But, perhaps most of all, it’s that both Mick Willoughby and the wizard had some magic in them.

Thornton "Mick" or "Mickey" Willoughby, who served as the town marshal of Old Tucson for 13 years, died peacefully at home from arterial sclerosis on Sept. 29 at only 57 years old. His family held a memorial service for him at Old Tucson on Wednesday, Oct. 25. It's not too often that a person's memorial service is held in the same place where they worked, but at Old Tucson, coworkers are family, and Mick was especially well loved.

"I believe it was a match made in heaven," said Mick's brother, Rocky Willoughby. "Mickey never really got over the fact that finally not only is he a cowboy, but he's the marshal. He's got a badge, a cowboy hat, a vest and boots."

Mick packed a lot into his 57 years, in terms of both materials and experiences. He started collecting bugs as a kid on the Wisconsin farmlands where he and his brothers grew up. As an adult, his interests and collections expanded: reptile specimens, seashells, rocks and gems, and books and materials for magic tricks.

When Mick came out to Tucson from Wisconsin in 2003, Rocky said he transported "probably eight cubic feet of National Geographic magazines" across the country.

"He had about four inches of clearance from his hitch to the road, and away he went to Tucson," Rocky told a laughing crowd. "He had some adventures on the way, but he made it."

"Adventures on the way" also aptly describes the way Mick lived his life. He counted bullfrogs on a Wisconsin wildlife preservation to help with conservation efforts. He escaped from many a straitjacket for the sake of his magic tricks, including once while suspended upside down from a crane. He worked at the Henry Vilas Zoo in Madison for a dozen or so years, where a snake once pulled him to the ground, began coiling around him and had to be wrenched off by other zoo staff.

"It takes a special kind of person to love a big snake," Rocky admitted, recalling a time when he'd gone to use the restroom at Mick's house, only to see 16 feet of Mick's pet Burmese python curled around the toilet. When he yelled to Mick to get the snake out of the bathroom, Mick called back, "oh no, go ahead! She won't mind!"

Or there was the time back in the seventies when Mick was working at the zoo and he met another man who was interested in snakes. Mick was so excited to meet another snake enthusiast that he invited the man up to his apartment to see his three Egyptian cobras. Once there, the man offered Mick $10,000 to buy some cobra venom, because he and his girlfriend were plotting to kill her wealthy husband. Mick went straight to the police, and arranged for the man to come back.

"Mickey gave him a little glass vial of milk and water, the man gave Mickey $10,000 and walked out the door into the arms of the police," Rocky said. "He did the right thing, and he's always been that way."

When Mick ended up in Tucson, he spent some time working at a pet store and a vet's office, then found his way to Old Tucson, where he worked in security, answered phones and was the go-to guy for escorting rogue critters off the property.

"The guy was just fabulous," said Paul Stanbrough, a historian at Old Tucson. "He was just amazing on that phone for many years, and I really feel like he was the voice of Old Tucson, and he will be sorely missed."

In talking to the people who knew and worked with Mick, his voice was something that came up over and over again: soft and gentle, and endlessly patient when answering phone calls about operating hours, features and directions to Old Tucson. Roxanne Crowhurst, another Old Tucson employee, said you could hear Mick's smile from the other end of the phone.

You can have a really bad day, and you talk to him for a little bit and he made it okay," she said. "Everybody smiles when they see him."

Scott Madsen, the human resources and operations manager supervisor at Old Tucson, took the podium at the memorial to praise Mick's patience and hard work, to say how much he would miss Mick's desk being just a few paces away, and to recall memories of Mick handling reptiles and performing magic in Old Tucson shows.

"To make a long story short, Mickey was a naturalist," Rocky said. "When you remember him, remember the little animals, the creatures, the things that bite and sting and crawl around the house.... He got to where he wanted to be. He was very happy to be here."