ATC’s Summer on Stage program doesn’t just give teens a taste of acting. It gives them a taste of the real world 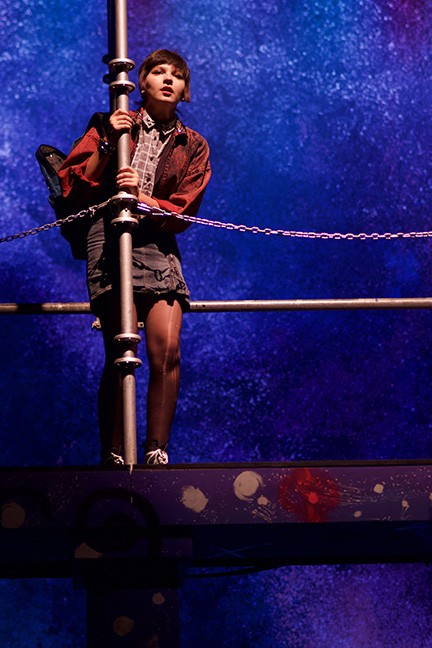 For mature audiences only. It's a label that often keeps kids and teenagers—however mature they may be—from accessing content they're interested in, or sometimes even content that's about their own experiences. The idea, of course, is to keep young people safe, to stave off the world's less pleasant realities until absolutely necessary. But, as anyone who's truly mature knows, sometimes age and maturity have little to do with one another.

At the Arizona Theatre Company's "Summer on Stage" program, a group of 33 teenagers from around Tucson spent five weeks putting together two shows around the theme "Summer of Youth Unheard," to tie-in with ATC's 2018/2019 season theme, "Scene in America." The teens performed two shows each of the rock opera American Idiot, based on the Green Day album and co-written by Billie Joe Armstrong; and Polaroid Stories, a play by Naomi Iizuka that blends stories about urban homeless youth—based on interviews she conducted in the 1990s—with characters and tales from Greek mythology. Both shows explore tough issues like teenage pregnancy and drug use.

Israel Jiménez said that in a master class for teens last year, students were talking about censorship, especially when it came to the voices of youth, and began brainstorming ways to tell stories that weren't being told or noticed.

"It planted the seed with something that they wanted, not just their voices to be heard but the voices of youth in America," he said.

Adults often struggle to find the time for artistic pursuits between the demands of a job and family life. While teenagers face responsibilities and burdens of their own (Have you talked to a high school senior about the college application process lately? And do you remember days where you were so confused and frustrated by the overwhelming change of teenage-hood that getting out of bed was something of an accomplishment in itself?), this group put hard work and heart into their productions while raising awareness of prickly issues like teenage homelessness, drug addiction, pregnancy, violence and alcohol abuse.

"I think it's very important in our current political climate," said Allie Devaney, a 16-year-old soon-to-be Ironwood High School student who performed as Whatsername in American Idiot. "Oftentimes I feel like we do go unheard because it's like, 'You're too young to understand politics.' We get to be able to transfer all of our feelings about these heavy issues onto the stage."

Nineteen-year-old Timea Post plays D, a character based on the Greek god Dionysus who acts as the leader of the pack of teens in Polaroid Stories, said part of why she loves ATC's Summer on Stage program is because she and her peers aren't babied. It's a gritty show, and the program directors didn't make irrational edits to protect the people telling it.

Polaroid Stories director Mitchell Glass was brought in to start directing the show just two days before rehearsals began, due to a last-minute emergency. In the chaos of the preparing and beginning to explore such a range of hard-hitting issues, he was immediately impressed with his cast.

"These kids are so educated," he said. "The word is 'woke.' They handled the subject matter very maturely.... They never made judgments about these kids [they're portraying]."

In an effort to foster this and provide further perspective, Glass brought in representatives from groups like Youth on Their Own, a local organization that aims to help homeless youth graduate from high school and find success. He also invited in a speaker that had once been a homeless youth.

Before they tried to invent their own roles or guess at how groups of people their age but living in vastly different circumstances might think and act, this group of high schoolers sat back and listened to stories about and from unheard youth, eager to get it right.

"When I first got the character, I was really worried," said Brian Evans, a 17-year-old who plays a teenage drug addict in Polaroid Stories. "I've been fortunate enough to be a heard youth, so I really wanted to do justice to these characters."

Portraying a teenage drug addict getting beat up for stealing drugs, or a gay teenage prostitute, or a teenage girl who gave up her baby because she couldn't take care of him would be a big responsibility for anyone. But there's no one better to do it than a real teenager. It's striking to realize that these characters with addictions and abusive relationships and no homes to go to are based on real people, and perhaps even more striking to remember that they're teenagers with big plans and big dreams and no homes to go to.

Evans said learning about the difficulties homeless youth have in trusting other people—even those who want to help—stuck with him. Especially, he added, because these young people often don't look any different than someone he might see in math class or even in a summer theater program.

"They don't look homeless or addicted," he said. "They just look like us."