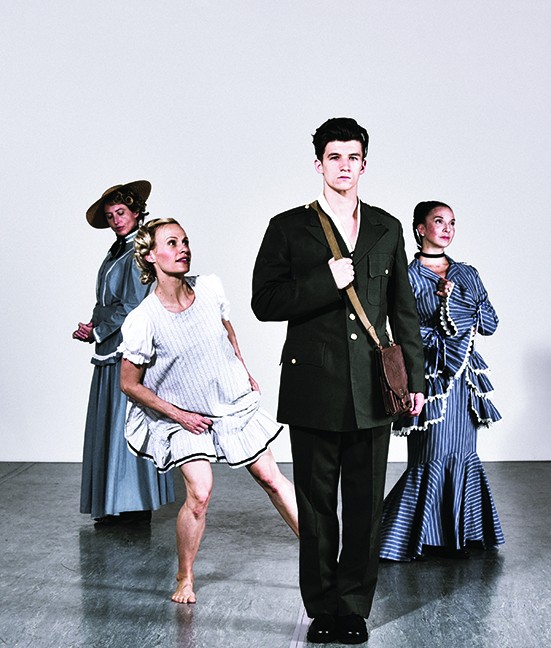 Beguiled has been once a book and twice a movie. Now, through the graces of Artifact Dance Project, it will also be a dance, debuting next week in Positions of Power, the first concert of the troupe's fall season.

"In watching it, I thought how well it would translate into theater and even more into dance," says Hancock, an Artifact co-director and dancer.

The dialogue in Coppola's version is sparse, she notes, and silent body language conveys the tensions between the characters.

"You can feel what unfolds will be tense," she says. "We could communicate that clearly without words."

Hancock says the story keys into some aspects of the MeToo movement.

"I liked that it has scenes parallel to now," she says, "having power over someone or being powerless. Or coming on to someone, and then saying they came onto you."

Hancock changed the title from Beguiled to "A Painted Devil," to distinguish the new work from previous iterations. She's never seen the 1971 movie. Instead, she says, "I've gone back to the novel."

The 45-minute piece will be performed to live music by seven dancers in period costumes. Jeffery Griffith dances the mysterious soldier McBurney and Marquez Johnson plays another soldier fighting McBurney in a short "war duet."

Hancock portrays a young student, while her fellow co-artistic director Ashley Bowman takes on the authoritarian headmistress played by Nicole Kidman in the Coppola film. The role marks a return to the stage for Bowman, who gave up dancing for a few years to concentrate on choreographing and directing. Lauren Renteria plays a teacher and Kali Schmeltzer and Rebekah Belanger dance the part of students. Belanger plays the school's youngest pupil, a 13-year-old who brings the wounded man to the school and is crucial in determining his fate.

Artifact specializes in contemporary dance—shaped by both ballet and modern dance—and the troupe is also committed to live music. The evening's two dance works each offer up a bevy of musicians in the pit. The score for "A Painted Devil" is made up of seven small pieces by composer Vincent Calianno and deploys six musicians: two violinists and viola player (three-quarters of a UA grad school string quartet), along with a pianist, percussionist and vibraphone player.

"I'd worked with him before and I went to his website and found chamber music," Hancock says. "The pieces are just so strong. When I listened to them, I said, 'This is the score!'"

The other dance on the program, "The Oval Portrait," is a reprise of Hancock's "The Oval Portrait," an early Artifact piece from the 2010 Poe concert. Like "A Painted Devil," it has a literary origin. Based on an Edgar Allan Poe short story, it's a disturbing tale of a painter so determined to make the perfect portrait of his wife that he neglects the live woman seated in front of him.

Hancock dances the part of the unhappy wife, Johnson is the obsessed painter and Bowman has a small role as the person who uncovers their story. The music, composed by Tucson's Dan Coleman, will be performed by all four members of the UA grad student string quartet: two violinists, the viola player and the cellist.

"This was Dan's first string quartet," Hancock says, dating back to the year 2000. When she was searching for music for the Poe show, she listened to Coleman's piece and realized "this tells the story perfectly."

Now in its ninth season, Artifact has made some changes. Bowman and Hancock gave up their downtown studio on Toole, where they taught classes and staged informal concerts.

"After four years we gave the space up," Hancock says.

The efforts it took to keep the place going, to pay the rent and to teach all those classes limited their time and energy for their real work: keeping the dance company going and for producing large-scale shows. (Hancock has also been developing a side career as an actor, most recently appearing in Lovers at Scoundrel & Scamp Theatre.)

The lack of a permanent dance home won't reduce the number of Artifact concerts too much. Instead of the usual roster of four concerts a season, two in a theater and two in the studio, this season Artifact will produce three.

Two mainstage shows, this month's Positions of Power and March's Goliath, will be mounted at Eller. One smaller show, a dance-drama collaboration with Patrick Baliani, Monologue of a Muted Man, will be staged in May at the UA's Ina Gittings studio.

With Bowman returning to the stage and Hancock taking on more choreographing, "We feel like we're going back to our roots," Hancock says, "to an older, simpler time."