Batter up! It’s a new day at Rita Hillenbrand Stadium 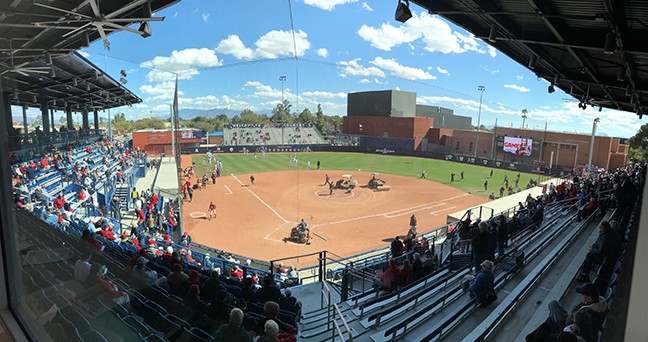 A brilliant blue sky broke through a wall of slate gray clouds in the early afternoon hours Sunday, Feb. 17, shining light on the University of Arizona campus' newest gem.

The school's freshly rebuilt softball complex, Rita Hillenbrand Memorial Stadium, is tucked inside a parcel of land between the UA's physiology building and Second Street. The venerable venue, built in 1993, received a $15 million makeover during the offseason, razing everything except the turf and the steel bleachers behind the left field fence.

Perhaps the biggest change for players and fans alike is the completely new grandstand that includes brand new, dark blue chair-back and bench seating, along with a canopy granting attendees reprieve from the harsh desert sun.

Other changes include an enclosed press box and club seating area along the upper level of the seating area, along with rail seating on the upper concourse.

The end result of the facility's facelift was on display over the weekend when Arizona hosted the Wildcat Invitational softball tournament. Sunday's matinee between the Wildcats and Cal State Fullerton provided a bookend on an action-packed weekend, with the home side winning the finale, 6-0.

The Wildcats took care of business, giving the crowd of 2,111 something to remember aside from the team's new digs.

Those in attendance seemed quite awestruck by the stadium's new look. Longtime usher Steven Feder summed up the crowd's reaction.

"They've done a fantastic job, really," he said. "Just consolidating the seating and making it easier to get to places. There's both a lower and an upper concourse. And the fans that I've talked to have just been raving about it."

Others, like Kim Bowen, whose daughter, Hannah, is a pitcher on this year's squad, believe the improvements will be a boon for the program going forward.

"[The renovated stadium] is representation for players," Bowen said. "They know that the school believes in them, so it just gives them strength to move forward."

Mike Candrea, who's in his 33rd season coaching the Wildcats, shared Feder's sentiments, calling the team's new stadium a game-changer.

Candrea has long vouched for the need to renovate the stadium to bring the Wildcats up to par with the heavy hitters in the nation.

"They've got a lot of stuff to do on the stadium, but the impact it's going to have on the program should be very positive," Candrea said. "I think first of all, people that come in to play us spend their first 10 minutes sightseeing and looking at the place. I don't think you can look at a picture, until you walk in here and see it; it's pretty special."

Candrea believes the facility's renovations make it one of the best places to play in the country, with all the facilities and amenities that players and fans long for.

"The big thing for me, obviously is recruiting, I think it will be a big factor and I also think to pave the way for the future of this program," Candrea said. "[That's] very important because this is almost a necessity in today's world and I'm just really proud that softball's grown this much and that a softball program of this type deserves a place like this."

Senior pitcher Taylor McQuillin, who threw three complete games in as many starts during the weekend tournament, believes the team's play at the stadium will improve with time.

Her sentiments stemmed from the team's losses to South Florida (4-1) and Alabama (6-1), which she believed to be a result of nerves and inexperience.

The senior flame-throwing pitcher believes the squad will improve as they get used to the new complex, as the Wildcats look to capture their first national title in 12 years.

"I think that at first with a brand-new stadium we're opening up and it's a big deal, I think we kind of put a lot of pressure on ourselves just knowing the situations that we were in," McQuillin said. "We came in and faced good teams this weekend. So, we've just got to come out knowing that we're a strong team and as long as we stick together, we can do it."

The weekend was a win for Candrea and his staff, regardless of how his team performed, simply because of the long road to modernizing their longtime stadium.

Candrea was sentimental in describing what the stadium's impact on the program and the city of Tucson as a whole.

"It's a pretty special feeling for me," Candrea said. "It's not often that you get to live two dreams and one [for me] was the first Hillenbrand Stadium and then to be able to see this one come to fruition has been pretty awesome."