Isle of Dogs is a real tail-wagger 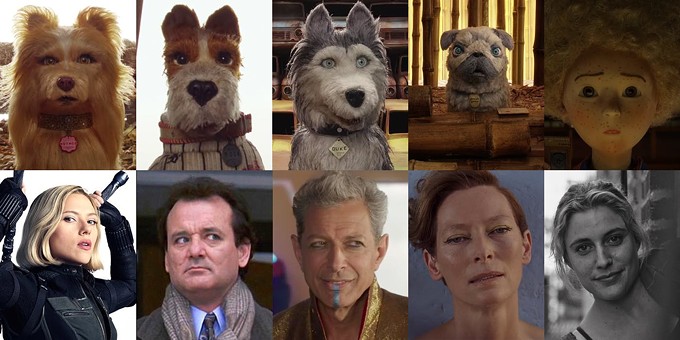 So, if you've been sitting around waiting for a Wes Anderson film featuring a stop-motion dog cast influenced by Akira Kurosawa and the guys who made Rudolph the Red Nosed Reindeer, wait no more!

Isle of Dogs is one of the strangest—and coolest—experiences you will have in a theater this year. Anderson's second foray into stop motion animation (after 2009's excellent Fantastic Mr. Fox) is another visual masterpiece. While the story itself goes a little flat for stretches, it's nonstop visual splendor for its entire running time.

Two decades in the future, Megasaki, a fictional Japanese city, is ruled by the evil Mayor Kobayashi (Kunichi Nomura). Kobayashi is a cat person, and after the nation's dogs come down with a strange strain of dog flu, all canines are banned to Trash Island to live out their days scavenging through garbage and rumbling in the junkyards.

Kobayashi's nephew Atari (Koyu Rankin) misses his dog Spots (Liev Schreiber) and sets out to find his beloved pet on Trash Island. The island is occupied by various dog gangs, one of them consisting of Chief (Bryan Cranston), Rex (Edward Norton), King (Bob Balaban), Boss (Bill Murray) and Duke (Jeff Goldblum). Whether it's live action or stop motion, you can count on Anderson's usual gang of performers to show up (Welcome to the Wes Anderson party, Bryan Cranston!).

There's some dog gang squabbling for leadership honors, with Rex often calling for votes that the rebel Chief always loses. When Atari shows up on the island, Chief winds up spending the most time with him, and he learns a little bit about bonding with a boy, as dogs do.

There's a very sweet "love your dogs" message at the center of Anderson's story, which he wrote with story contributions from Roman Coppola, Jason Schwartzman and Nomura. This is one of the rare Anderson films in which neither Schwartzman or Owen Wilson appear.

Of course, there's a budding love story, with Chief coming across Nutmeg (Scarlett Johansson) who, unlike Chief the stray, has papers and can do tricks. (A bit where Nutmeg reluctantly shows off a few provides some of the film's best laughs.)

Story elements are secondary to just how goddamned good this movie looks. While Fantastic Mr. Fox had the better overall story, Isle of Dogs is, hands down, the best-looking stop motion animation film ever put to screen. Each one of the dogs is a marvelous creation unto itself, and their human counterparts are just as amazing. Anderson and crew get extra credit for taking fight scenes and explosions to a new level through their use of what appears to be cotton.

Other voices that show up include Frances McDormand, Tilda Swinton, F. Murray Abraham, Yoko Ono and, most notably, Greta Gerwig as Tracy Walker, an American exchange student with a crush on Atari.

Much of the film is spoken in Japanese with no subtitles, but it's never hard to understand what is going on. (Thankfully, all of the dog barks have been translated into English.)

With every passing second of this movie, I was thinking "How the hell does Anderson even think this stuff up, let alone get it on the screen?" It's safe to say this movie is a feat that will never be duplicated. I seriously doubt anybody in the future will make a movie that reminds us of Isle of Dogs. It's off in its own, unique cinematic zone.