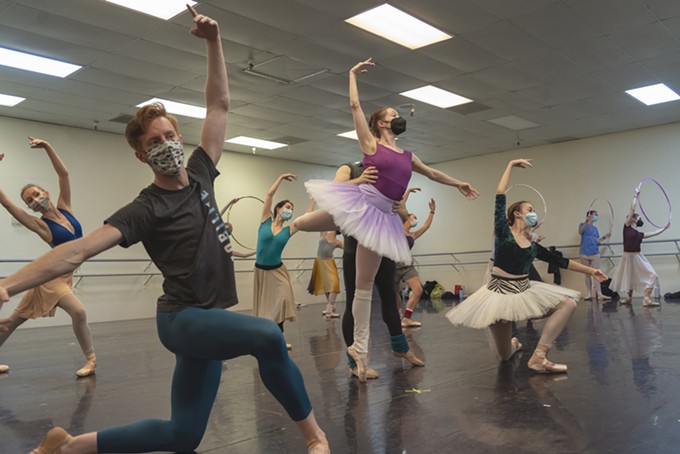 (Noelle Haro-Gomez/Contributor)
From left to front, Skylar Burson, Jennifer Holoubek and Alexis Collins practice during rehearsal for their upcoming performance of “The Nutcracker.”

During the holidays, Ballet Tucson dancers don their ribboned pointe shoes to perform “The Nutcracker” with remarkable prowess.

But unlike other years, this performance welcomes a match made in Tucson arts heaven. Their upcoming winter show is a partnership with the Tucson Symphony Orchestra, thanks to the efforts of the James H. and Frances R. Allen Family Foundation.

The company has a long tradition of performing the show, and for many of those years, they used professional recordings to back up their dancers. As a School of Ballet Tucson alum and an accomplished former dancer, Artistic Director Margaret Mullin said the orchestra’s involvement enhances the show.

“Energetically, it’s so much more powerful to have life onstage and life in the pit all radiating out to the audience,” Mullin said.

Tucsonans can expect the same show, with just a few choreographic updates and live music. To Tucson Symphony Orchestra CEO and President Paul Meecham, it was the perfect way to change things up for the holidays.

“It was serendipity,” Meecham said regarding the initial conversation. “We were looking for things to do that perhaps were different to what we were doing before the pandemic.”

The partnership would not have formed without the collective efforts of the Allen Family Association, longtime supporters of Ballet Tucson and Tucson Symphony Orchestra. James H. and Frances R. Allen endorse the show in memory of their daughter, Kimberlee Allen. They understood and appreciate the element of live music with ballet and want to see their family tradition go further.

“We feel that it is important that the performing arts organizations here in Tucson collaborate to bring world-class performances to Tucson,” the Allens said in a statement.

“That is why we are sponsoring both Ballet Tucson’s holiday performances of ‘The Nutcracker’ at the Linda Ronstadt Music Hall and also the Tucson Symphony Orchestra to play Tchaikovsky’s beautiful score to accompany the dancers and create the magic only live music can provide.

“It is important to note that all of our performing arts organizations here in Tucson rely not only on ticket sales but also the generosity of the community, individual contributors and sponsors to thrive and greatly enrich our lives here in our beautiful and very special small desert community.”

Mullin added that the foundation’s contribution, however, has another special reason.

“They’re not just sponsoring ‘The Nutcracker’; they are sponsoring our partnership with the Tucson Symphony Orchestra,” Mullin said. “They believe it is important for arts in our community to be collaborative and for all of us to be coming together to provide inspiring arts experiences to Tucson.”

Ballet Tucson’s “The Nutcracker” is its biggest production of the year. The company is adding some new choreography and is working behind the scenes on extravagant sets and props and elaborate costumes. Ballet Tucson prides itself on a more traditional take of the show, following the 19th century German timeline.

Every element is upheld to historically accurate standards — the party scenes and the adults and children in them are rooted in the 1800s. The land of sweets is whimsical but, in the spirit and tone of its traditional design.

Generations of thespians have helped the company put on this show, most with a history of performing with Ballet Tucson. Many of the costumes, including the nutcracker, rat king and sugar plum fairy, were made and remade “out of love” for decades.

With the design elements in check, everything is appropriately “tied into the musical tone” of the dances, and the orchestra will guide audiences further into the realm of “The Nutcracker.”

“It’s a dream for us to not only have live music but to partner with the Tucson Symphony Orchestra. They’re a wonderful organization, their musicians are very talented,” Mullin said.

The organization is the first professional symphony orchestra in the Southwest and the oldest art institution in Arizona. Tucson Symphony Orchestra performs highly skilled and award-winning shows and engages the community through education and outreach.

A big part of this includes working with other organizations to bring something extra special to Tucson. To Meecham, it’s a way to help audiences explore artistic expressions.

“It’s that cross-pollination of audiences, which I think is very exciting,” he said. “It can lead to those audiences pursuing each company separately or further collaboration.”

While Ballet Tucson practiced “The Nutcracker” for months, TSO had a much shorter timeline. Preparation for the show began well in advance, but the rehearsal was condensed into a week.

This is common for the orchestra, especially with music it has played before. For TSO, “The Nutcracker” is, as Meecham put it, “in our fingers.”

“These kinds of partnerships are crucial to expanding the impact of what we as individual organizations can do. I think that’s good for the quality of the arts in Arizona,” Meecham said.

This will be the first year of a multiyear partnership between Ballet Tucson and the Tucson Symphony Orchestra for “The Nutcracker.”

“To be responsible for creating a magical moment in people’s lives and to do so in a community-minded way is really a gift,” Mullin said. “I’m very grateful to be a part of this exciting new partnership and to share this beautiful tradition with my hometown of Tucson.”