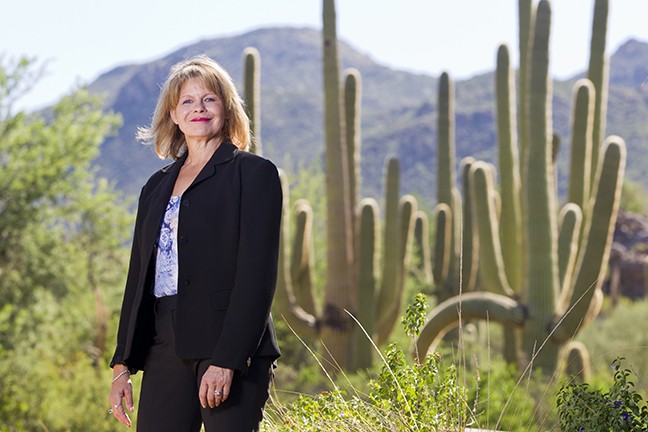 Courtesy Photo
Pima County Supervisor Ally Miller has suggested postponing flood-control projects in Oro Valley and Marana as part of her budget-cutting efforts.
Pima County Supervisor Ally Miller is calling the shots this budget season, with supervisors Steve Christy, Sharon Bronson and Ramón Valadez following her lead back to the drawing board in hopes of finding a way to pass a "property tax neutral" county budget.

The board voted 4-1 on Tuesday, June 18 to continue their budget and Truth in Taxation hearings to Tuesday, July 2.

Miller successfully convinced a majority of her colleagues to "sharpen their pencils" and come back with a budget that doesn't include year-over-year increases in the primary and secondary tax rates, specifically for the County Free Library and Regional Flood districts.

"If one of them goes up that's OK, but we have to find money somewhere else," Miller said at the meeting. "That's what my tax-neutral budget is all about."

With new libraries expected to open in the future, it is likely that the library district tax will have to increase. Miller wants to scale back funds in other areas of the budget to make up for the difference.

In order for taxpayers to see zero change in their bottom line, the county needs to find about $10.6 million from somewhere within current revenues.

Miller suggested putting a freeze on hiring within the county government. She estimates that move could generate $8.3 million in two months if they put a freeze on more than 1,000 currently vacant positions.

Since it has been difficult to fill those positions anyway, Miller reasoned that it might not be a hardship to enact a hiring freeze.

In a recent memo to the board, County Administrator Chuck Huckelberry said that hiring freezes are not only ineffective but "grossly inequitable" due to exemptions that are made for the sheriff's department, the attorney's office, the courts, and so on. The freezes often disadvantage the least popular departments.

The budget currently includes a two percent salary adjustment for existing employees as well as an increase in the hourly pay range for sheriff's deputies from the previous $23.50-$29.84 to $25.50-$32.94.

Miller also suggested postponing $8.4 million of flood district capital projects for at least one year, in order to bring down the tax rate of the flood district. Those projects include restorations for a pond at Agua Caliente Park, maintenance projects at the Santa Cruz and Rillito River, urban drainage improvements during monsoon and projects in Marana and Oro Valley, which are suburbs that Miller represents.

If that happens, Huckelberry said the county will effectively have to stop the flood control district capital program for a couple of years or more.

Supervisor Ramón Valadez found irony in the fact that close to $10 million in expenditures, by his calculation, has been imposed on the county because of decisions made from the state government, such as an increase in costs for the Public Safety Personnel Retirement System.

"The reason this is not property tax-neutral is because the state's costs transfer," he said.

County supervisors were initially excited about a new pay-as-you-go capital improvement plan, but this attempt to neutralize the tax rate might have thrown a wrench in that plan.

To finance large capital projects, the county has historically used voter-approved bonds and paid off the debt with low interest rates. This year the county will switch to the PAYGO system, as other counties have done, where the money would come from annual tax revenues instead.

Supervisors now need to consider how their tax neutral idea will impact the ability to use revenues for the PAYGO system. With the county's debt service rate decreasing by 17 cents next year, Miller says half of that can go towards PAYGO.

Supervisor Ramón Valadez said the board needs a more "holistic discussion" on how the PAYGO system will work within a tax neutral budget and that they do not have enough information to make a final decision yet.

"One of the dangers is the fact that you pretty much postpone the implementation of the PAYGO program," Huckelberry said at the meeting. "So the question becomes what is the right year to implement PAYGO?"

He sees the main difficulty of going down this path as finding a way to balance out those postponed costs in future years.

Supervisor Richard Elías provided the sole "no" vote to continue the hearings, since he rejected the proposals Miller brought forth, particularly the hiring freeze.

"We have ridden the backs of our employees mercilessly over the last 10 years, and been unfair to them both in the compensation that they've received and the fact that we haven't kept up with hiring," Elías said at the meeting. "And our staff has worked to terrible ends trying to get that done, and ultimately many of them left the county because they could see no improvement coming from us."

Elías also wanted to see money included in the budget to fund high quality child care for low-income families in Pima County, but the other supervisors were not as welcoming to the idea.

According to Arizona statute, the board has until Monday, Aug. 5 to adopt a final budget. If they can't come to an agreement by then, last year's tax rates will be applied to next year, which show a $17.7 million reduction in what was proposed. ■