In November 2004, when voters approved a $235 million bond package to make improvements within the Tucson Unified School District (TUSD), a gallon of gas hovered around $2. Included on the long list of projects the district promised was a $3 million "parking facility" at Tucson High School, 400 N. Second Ave.

Today, gas is $4 a gallon, and the "parking facility" that may be about to come to fruition--a 65-space garage estimated to cost approximately $2.4 million--doesn't please some people.

Marcus Jones, director of TUSD's bond program, says the structure will be a one-story addition built over an existing parking lot located near the southeast corner of the campus.

"I am not a fan of the parking garage," e-mails Dan McDonald, chair of the school's Physical Education Committee. This group is examining plans for the garage as well as improvements to the existing Tucson High gymnasium and the construction of a new practice gym. "The cost for each additional parking space is exorbitant."

Jeff DiGregorio, president of the Iron Horse Neighborhood Association, south of Tucson High, has a different perspective: "The neighborhood is generally in favor of it," he says about the garage. "We do have (on-street) parking problems, but can't blame it all on Tucson High. But they do impact our street parking in a major way."

While supporting the garage, DiGregorio also advocates that the school place more of an emphasis on carpooling and bicycling to Tucson High. But he points out: "Some people will always drive."

Nancy Robbins, president of the Pie Allen Neighborhood east of the high school, says that she has mixed feelings about the proposed garage. "In some ways, I'm OK with the garage, but part of me thinks it will just allow more cars on the street. Sixty-five spaces doesn't seem adequate."

Robbins says that the drop-off and pickup of students is a bigger problem than parking for her neighborhood. Currently, the city of Tucson restricts street parking to neighborhood residents basically all around Tucson High.

Of these and other complaints expressed by Tucson High neighbors, McDonald says: "I do not believe that a parking garage is going to solve their concerns about traffic. In fact, additional parking spaces will increase the number of cars entering their neighborhoods."

Attorney John O'Dowd, a 1955 graduate of Tucson High and a long-time member of the Physical Education Committee, is the loudest critic of the garage. "We should be encouraging alternate means of transportation," he says, "or finding off-site parking." O'Dowd believes the money slated for the garage should instead be directed toward improving Tucson High's physical-education facilities.

McDonald says he thinks "the parking garage is a waste of money; however, taxpayers voted for it as part of the bond." Because of that vote, when O'Dowd made a motion at a recent committee meeting to delay the garage, he received no support. Nonetheless, McDonald philosophically agrees that the garage money should be used elsewhere on the campus.

Early cost estimates for the parking garage, improvements to the 1930s-era gym and construction of a new practice gym initially totaled $21 million. However, $10 million in bond money was available. To close the deficit, district officials will recommend the TUSD school board use $5 million in desegregation program tax money over the next three budget years for the Tucson High projects. However, that would still leave a deficit of $6 million.

To overcome this gap, the Physical Education Committee recently reviewed a long list of possible reductions to the gym budgets--cuts that O'Dowd says have gutted the proposals.

"I can't support the concept for the gym unless they put more money into it," O'Dowd says. "It's such a limited facility, and I can't support a limited gym, because it will slight the students."

McDonald stresses that even if the entire $2.4 million from the parking garage went toward the gyms instead, that wouldn't be enough to cover all of the physical education needs at Tucson High.

"Of course, we'd always like more for the students," McDonald writes, "but we will be patient and work on other long-term goals, such as (a proposed) aquatic facility."

O'Dowd is also concerned that the total bond-improvement budget will not leave enough money to address identified shortcomings in the existing buildings at Tucson High. He points to an architectural audit of all TUSD schools that was done a few years ago. It lists numerous problems at Tucson High, including leaking roofs and doors which are not building-code compliant.

Jones says he has both bond and nonbond money available to address at least some of these issues.

Meanwhile, planning for the parking garage and gym projects continues. The current schedule has construction beginning in May 2009, with the projects completed 18 months later. 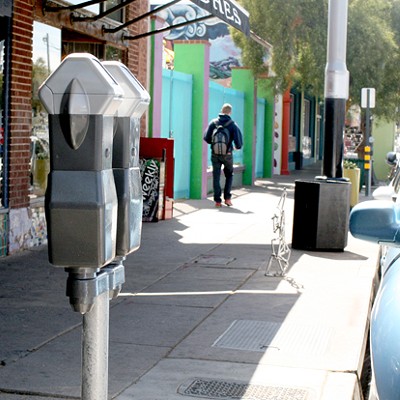 Tucson Festival of Books Should Be Fun, Sharing Parking Not So Much