So, who liked the movie?" asked one viewer as the mostly older crowd filed out of a matinee showing of Atlas Shrugged: Part I.

"Loved it," remarked one moviegoer. "What's not to love about a movie like that?" asked another.

More on what's not to love later.

One thing the filmmakers got unswervingly correct is the timing: Although Atlas Shrugged was released in 1957, Ayn Rand's novel has long been believed to be one of those books that couldn't be filmed. The free-market epic is nearly 1,200 pages (albeit divided into sections), making an adaptation troublesome. But the arrival of the Tea Party and a rising political temperature about taxes and bloated government has put Rand's rebel yell of objectivism back in vogue; it was one of the 50 best-selling books of 2009 on Amazon.com.

Rand depicts a 21st-century America that has gone off the rails, figuratively and literally. With the economy in shambles, we're told by newscaster narration in the opening scenes, crippling gas prices have made automobiles and airplanes virtually obsolete. The train is the only way to go in 2016, and Taggart Transcontinental is one of the last remaining modes of transportation.

After a century-old rail in Colorado finally gives out, causing a major disaster for her company, Dagny Taggart (Taylor Schilling) decides enough is enough, and forces her way into power, pushing to the side her moronic brother (Matthew Marsden), who is more concerned with sharing the wealth—to adopt the contemporary buzzwords—than making Taggart Transcontinental the best company it can be.

Taggart orders a vast supply of metal from Henry Rearden (Grant Bowler), a steel magnate whose focus is equally as singular as Dagny's. He likes profit and power, jumbo-sized. They see a mutual benefit from working together and against a federal government trying to pass a law that would force tycoons to own no more than one business. There might also be an added mutual benefit: If Hank Rearden doesn't see Dagny as a sexual object, then he certainly daydreams about her as a sexual objectivist.

There is also a mystery afoot, handled much more ably in Rand's book than in the 97-minute film: Some of the world's great thinkers are vanishing, and nobody knows why or how. About all that is known is a lingering question: "Who is John Galt?" For newcomers, this isn't worth more explanation here, because the film makes almost no attempt to provide an explanation. Since this production is supposed to spawn sequels, that's what parts two and three are for.

Returning to what's not to love about Atlas Shrugged: Politics, message and even the quality of the novel are of no concern in this space. This is about a film directed by Paul Johansson, who does a halfway decent job under the circumstances—circumstances which have very little to do with Rand's massive book and its legacy.

Fitness-supply executive John Aglialoro bought the rights to the book for $1 million in 1993. Those rights were set to expire if a film did not go into production by Saturday, June 12, 2010, which is exactly when cameras rolled. About a month earlier, there was no movie going into production; Aglialoro only jumped in to avoid wasting the million he'd already invested. At some point between Memorial Day and June 12 of last year, Paul Johansson replaced another unproven filmmaker named Stephen Polk in the director's chair. So those are Johansson's circumstances. There was no principal cast as of May 27, 2010. Within two weeks, this entire low-budget film came together.

So, in one sense, it's kind of remarkable that there even is an Atlas Shrugged: Part I, as hard as it still is to believe there will be parts two and/or three. But even forgiving the fact that the film was almost miraculously thrown together and filmed over about a two-month span, the screenplay is so devoid of nuance and structure, beyond simple chronology, that it's hard to get involved at any point. How surprised are you to learn that one of the men who co-wrote this adaptation, which Hollywood has for decades claimed was a near-impossibility, was fitness-supply executive John Aglialoro?

Suffice it to say, the acting is bone-dry and offers almost no depth or emotion, like rehearsals for a soap opera. At one point, Angelina Jolie showed a lot of interest in the role of Dagny Taggart, although not for this production. It's easy to see why. Taggart can be a complex character, but there's no evidence of it here. Schilling simply does not have the wherewithal to play the part, and she was given very little to work with, anyway.

But based on the initial audience reaction, filmmaking aptitude is not important. The people who want to see this film will want to see it because of what something else—Ayn Rand's book—represents.

But that doesn't make the film itself any better. Or any good, in fact.

Atlas Shrugged: Part 1 is not showing in any theaters in the area. 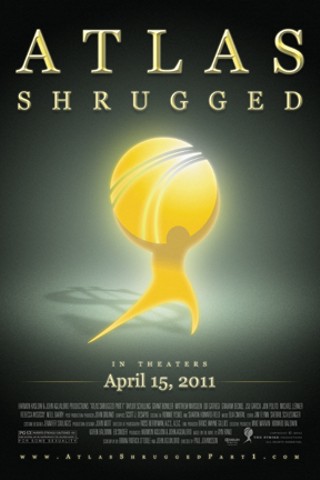