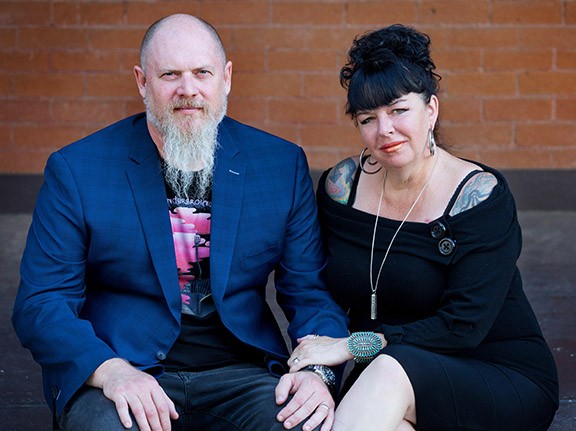 Courtesy Momta Popat
Cathy Rivers and Kris Kerry
Numerous love stories can be heard in the music of the Old Pueblo. What happens when "Till death do us part" meets rock 'n' roll? This week, meet Cathy Rivers, executive director of KXCI Community Radio and husband Kris Kerry, booker for the Rialto Theatre.

How they met: Sitting from inside KXCI's studio at the front of Club Congress gives a perfect view of Cathy Rivers's and Kris Kerry's world. The two met 20 years ago only a few rooms away as Rivers took the stage with her then band The Wonder Twins. After the show, Kerry had to tell her, "Hey, nice set."

"Meanwhile, I was standing at my truck, holding my amp and Kris is trying to talk to me," Rivers said. "I'm just like, 'Can I put my amp down, please.'"

At the time, Rivers was living in an art/work space above the Rialto Theatre that was sectioned off by curtains and had a utility sink. Back in the '90s, Congress was so dead she remembers watching a tumbleweed roll down the street with the other tenants.

The two would later marry at the Rialto Theatre when they were 30, with "Ring of Fire" by Johnny Cash as their song.

Rivers said she knew she had met the man she was going to marry after their first date.

"The reason I knew was it was different than all the relationships," she said. "There was no jealousy, no threat, it felt like home and that's the person you want to spend your life with."

How they make it work: The two have been married for 20 years and credit their successful relationship to space, separate bank accounts, shared interests and most of all their strong friendship.

"During the weekend, she will do whatever she does downstairs and I do whatever I do upstairs, and I'll come down and ask, 'Hey, how's it going,'" Kerry said.  "If we had a little economy apartment, I think we would get on each other's nerves more."

Rivers added that they are very fortunate.

"We love each other, we are best friends," she says. "One of the deals we made when we first married was to never sleep in seperate beds. If we are in a fight, even if it's 3 a.m. we settle it before we go to bed with no going to sleep in another room or on the couch."

The two said their decision not to have children has also allowed them the life they enjoy together. Their parental instinct is nurtured through watching and helping young musicians grow, and they have nieces and nephews in their lives.

How they rock: While you might not see the couple on stage, they are likely behind music you've heard locally. Rivers is executive director of KXCI Radio and Kerry books shows for the Rialto Theatre and 191 Toole.

Kerry said collaboration between the pair might be as simple as asking Rivers if she thinks a band would do well at a show in town. Because of their jobs and the proximity, they get to see each other every day.

"There's rarely a day that goes by that I don't see you," Kerry said to his wife. "During the day at some point, you're either downtown and I see you or you stop by the Rialto or I see you at KXCI."

How they roll: The two enjoy art together, swimming and relaxing at home. They sometimes attend concerts together, but Kerry is the one most likely to be at a show. He said he goes to four or five concerts a week.

Power of music in their relationship: "Some people don't think about music until somebody dies and they think about what to play at their funeral," Rivers said. "Music is a ribbon that flows through our lives and because it is so strong with both of us, that core passion is what keeps our marriage strong and our friendship strong." ■