A couple of years ago, if you would have come up to me in a bar and declared, "I think Channing Tatum is a fine comedic actor!" I probably would've thrown my beverage on you.

The resulting melee would've landed us in the clink, ensnarled us in the criminal-justice system, and alienated us from friends and family—all because I thought Channing Tatum was a weak actor. Hey, the guy was in crap like Step Up, G.I. Joe and Fighting, for God's sake.

My opinion started changing a bit over the last few years. I thought Tatum was the best thing in The Dilemma, in which he showed some twisted comic potential. His dramatic turn in Haywire actually approached greatness.

Now comes 21 Jump Street, and it's official: Channing Tatum is a badass comedic actor. The man is funny, a ninja-master of dumb-guy comedy.

Co-star Jonah Hill came up with the idea, along with pal and screenwriter Michael Bacall, to reboot the late-'80s TV show that launched the career of Johnny Depp and gave Dom DeLuise's son something to do for several years. The reboot departs from the original's mystery-thriller roots to become a raucous R-rated comedy. It's at once a tribute to the show and a hilarious mutation of it.

We learn in a prologue set seven years ago that Schmidt (Hill) was a loser in high school, prone to public humiliation and bad hair. Jenko (Tatum) was Mr. Popular, but his inability to get passing grades got him booted from the prom. So they both have high school issues.

The two meet up seven years later while applying to be cops. Jenko suggests that they become friends, because he needs a tutor. They actually strike up a bond that is heartwarming and brotherly, and embark on careers as bike cops.

After an arrest in which they dry-hump a perp in a public park and forget to read him his rights, the two wind up in a newly restarted police program ... on 21 Jump Street. They discover via an impassioned and angry speech by their foul-mouthed captain (Ice Cube) that they will be posing as high school kids while trying to infiltrate a drug ring.

The high school is where co-directors Phil Lord and Chris Miller (who also co-directed Cloudy With a Chance of Meatballs) take the premise from fun to all-out genius. Former popular-guy Jenko is immediately deemed weird in his return to high school, while Schmidt's brand of geek-loser is now embraced. The two go on separate paths, with Schmidt finding fame as the star of the school play, while Jenko is reduced to hanging out with the nerds.

The men soon discover the high school drug ring is led by Eric (Dave Franco, brother of James), an eco-friendly kid who is working on the school yearbook—and distributing a new synthetic drug. Schmidt and Jenko's consumption of that synthetic drug leads to the film's funniest sequence, culminating with them finger-gagging each other in the bathroom.

Hill, who momentarily slimmed down for the movie, is his usual fast-talking, wise-ass self here, a nice follow-up to his Oscar-nominated turn in Moneyball, and his best funny work since Superbad.

Tatum's portrayal of Jenko is nothing short of precious. He's a big idiot—but the beauty in Tatum's idiot is that he's endearing and likable. The fact that Tatum can make us feel sorry for Jenko is a testament to his surprising abilities as both a dramatic and comedic actor. While the role calls for a considerable level of slapstick, Tatum gives Jenko a real soul. Hill does the same for his character, making this comedic duo one of the best since Seth Rogen and James Franco teamed up in Pineapple Express.

For those of you who, like me, were getting a little tired of Ice Cube in "family-man" mode, this film is your antidote. The moment he started spewing beautiful vulgarity, his N.W.A. anthem "Straight Outta Compton" popped into my head. ("Compton" showed up later on the film's soundtrack, too.) The man is most at home when four-letter words are coming out of his mouth—and accompanied by rich, comedic anger. This is the best thing Ice Cube has done in a movie since Boyz n the Hood (although he was very good in last year's Rampart).

The film contains various cameos by 21 Jump Street TV alumni. I will just say that the cameos are not only welcomed, but brilliant.

The supporting cast is strong throughout, including Chris Parnell as a determined drama teacher, Jake M. Johnson as the school's annoyed principal, and Rob Riggle, doing his patented obnoxious-guy routine, as Mr. Walters, the nasty phys-ed teacher.

21 Jump Street leaves itself wide-open for a sequel—one that was apparently green-lit once Columbia Pictures saw the impressive opening-weekend returns. It looks like Hill and Tatum have themselves a franchise; they are a strange and wonderful pairing.

21 Jump Street is not showing in any theaters in the area. 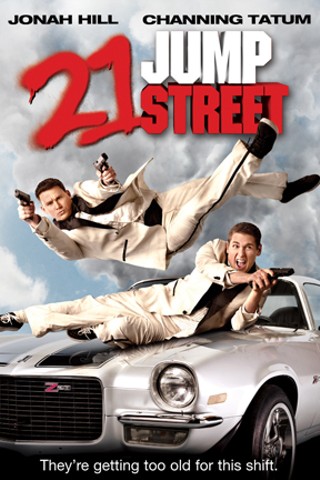