By Gretchen Wirges, Taming of the Review 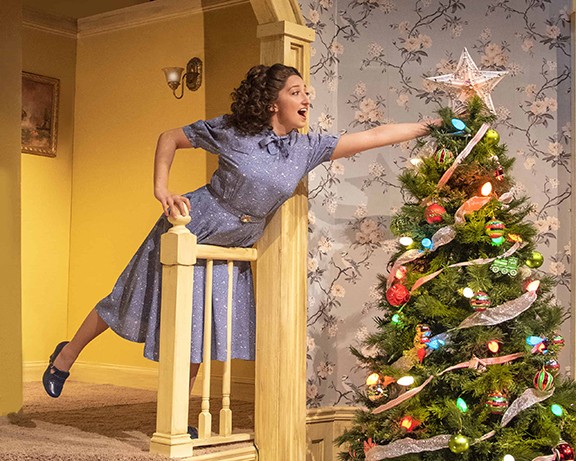 The Last Night of Ballyhoo

Lala (Carly Natania Grossman), is obsessed with Gone with the Wind and dying for the right boy to ask her to the dance on the last night of Ballyhoo, the southern Jewish festival. Her uncle brings home a colleague for dinner, Joe Farkas (Jaime Plá), a Jew from Brooklyn. We quickly discover, as anti-Semitic epithets are used, that there is a status delineation between German Jews and those "East of the Elbe river." The Elbe river runs between Germany and Czechoslovakia, as Aunt Reba (Elana Rose Richardson) explains.

Some comedic moments are offered up by the affable Uncle Adolf (Liam Thibeault), though his character also accepts the discrimination within the Jewish community of those Jews deemed lesser and who are excluded from joining the more prominent country clubs or attending the fashionable events. This pattern plays out similarly with Peachy Weil (Michael Schulz). His jokes and playful nature are quickly overshadowed by his negative and offensive characterization of "the other Jews."

Many of the performances were a little underplayed under the direction of Hank Stratton. Brunswick's portrayal of Boo was a little one-note. We lost the complexities of the character, a balance of her expectations of her daughter, the cultural struggles she faces, and her own overall happiness to a delivery that often just came off as mean and snobbish. Richardson, as Aunt Reba, was sweet but also lacking dimension.

The real standouts in this production were Grossman as Lala and Thibeault as Adolf. Grossman is electric, and allows us a glimpse into Lala's myriad of emotions and dreams. She plays the familial conflict of culture with finesse. Grossman brought every scene she was in to life. Quite the opposite end of the energy spectrum but equally talented was Thibeault in the role of Adolf. He was grounded and believable, patient and observant.

Many of the costumes by designer Alexia Avey were beautifully period and well-crafted. (Hello, purple pleated piece of gorgeousness in Act 2!) But I found it oddly distracting that a few of the costumes' colors matched the pieces of decor in the set—a brown dress the same color as the drapes, and so many pastel blues that blended in with the furniture and couch pillows. Another distracting costuming element was that all of the female roles wore wigs. Each wig had that synthetic shine that even an amateur can pick out as an imposter. The obvious heavy-handed costuming in this case further distracted from an otherwise stunning visual presentation by set designer Joe Klug.

While I enjoyed the performances, I was left feeling let down by the story. Sunny takes up romantically with Joe (considered one of the "other Jews") and he discovers her family's long-standing perception of those like him. The dramatic scene that I had been waiting for never happened. Joe confronts Sunny. Joe and Sunny make up. And in the last moments of the play, we see the entire family celebrating an important Jewish tradition together. Even though the play was two hours long, I felt as though I had accidentally skipped a scene where Boo is confronted on her prejudice, Adolf is taken to task on towing the line of accepted ignorance, and Peachy gets the boot instead of Lala's hand in marriage.

The Last Night of Ballyhoo is a play that allows us to catch a glimpse of real issues and cultural conflicts but never really produces. It's a conversation starter. It feels like the type of play a theater company chooses when they want to seem edgy without really delving into the conversation of conflict. There are better, more contemporary plays to choose if we want to really address issues of discrimination and oppression. I left the theater desperately wanting to know more about the history of Jews in the American South. The little I did find out in Ballyhoo was glossed over by party dresses, plates of late night chicken and Scarlett O'Hara. ■