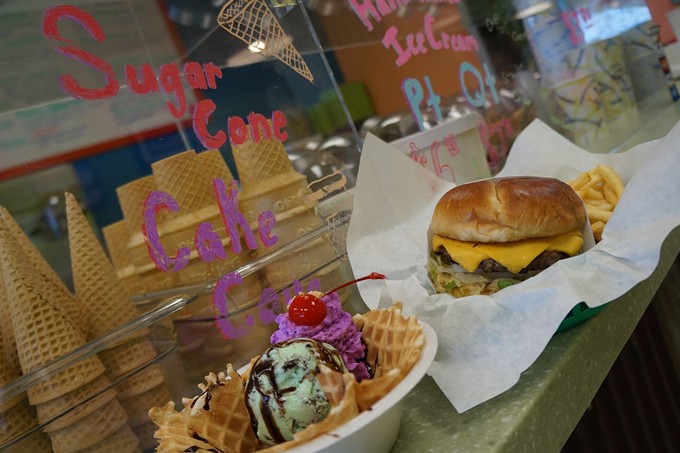 When you step inside the brightly painted café Atomic Frog, with its pastel greens and electric blues, it's hard to imagine it any other way. Sitting snug in the Thornydale Plaza, right behind Mountain View High School, the new-fangled, old-fashioned ice-cream parlor would have a very different feel if it was festooned with copper-colored billows and industrial 19th-century powered technology. Owners Heather and James Johnson, who originally were considering going with a steampunk theme, think the same way.

"The steampunk thing would have worked with the kids but not the entire family," James said. "In fact, when we look back on it, it seems kind of pretentious. So we went from an early atomic-age look to modern, even slightly psychedelic, atomic-age colors and style. We like it a lot better, and it fits better with the neighborhood."

The space that Atomic Frog calls home was once a popular sushi restaurant, Sushi Tran, which ran for more than a decade. After that, it housed an ill-received Mexican spot that quickly folded. Then the Johnsons moved in.

The idea behind Atomic Frog is to bring back a neighborhood hangout that isn't fast food, with prices that even school kids could afford on their lunch break. It's the kind of place you either stumble upon by happy accident, making it your go-to when you just want a decent sandwich for a decent price, or hear about word-of-mouth from locals. Thing is, Atomic Frog has barely been open a month, but so far the response has been nothing short of encouraging.

"The immediate positive feedback means that we are on the right track," Heather said. "Most ice-cream parlors that we grew up with were really clinical, so we wanted to be the opposite of that. We're not getting rich doing this but knew that when we opened, because we price-point our food at very affordable prices."

The comfort-level fare they serve is a nod down memory lane, not just in cost but in flavor as well. The burgers are a meaty quarter-pound. And for just over $5, you get a generous plate accompanied by a pile of piping-hot fries. The hot dogs would put any that you find at a state fair to shame. Huge all-beef, juicy franks that can be smothered with house-made chili for just a few dollars somehow taste like something you ate as a kid growing up in a small town on a warm summer day. And that, for me anyway, is the best thing about Atomic Frog; in a time of flashy concepts and chef-driven food trends, it is a quiet, yet quirky, small stand-alone that harkens back to a slower and even simpler time.

James has been in the service industry for 30 years. After getting his culinary certification in Los Angeles, he moved to Tucson in 1994 sort of by mistake.

"I wanted to be a teacher and was about to go to ASU," he said. "My aunt lived here in Tucson, and when things didn't work out in Phoenix, I just ended up staying. Heather and I were friends for years and eventually she moved out here from Virginia. After getting married we knew we wanted to open our own restaurant, something reminiscent of places we frequented as kids."

"We want to be the Cheers of Tucson but without the beer," Heather said, laughing. "Already the kids from the high school say they are 'going to the Frog.' So that's cool."

Atomic Frog just started serving breakfast and, like their burgers, dogs, sandwiches and salads, you can fill up on the cheap early in the day. Their breakfast burrito for $5.75 is a beast. Filled with fluffy scrambled eggs, cheese and your choice of ham, bacon or sausage. (I got the bacon, and there was a lot of it, nice and crispy too.) It's a good meal for the hungry student or commuter on the go. But it's the Atomic Bomb dish that you need to sit down and size up to deal with. At $7.25, you are squared with two large pancakes, two eggs, home-style potatoes, toast and either bacon, sausage or ham. I got the ham. It was a straight-up slab. To say the least, you'll get your money's worth.

Upon walking in, front and center, you are greeted by their ice-cream counter. Thankfully, they serve Thrifty-brand flavors, which is another throwback to balmy afternoons growing up in Southern California. You need to get their banana split and share it with some friends. It's huge: chocolate, strawberry and vanilla scoops are then topped with rich, hot fudge, fresh strawberries and pineapple, whipped cream, and, of course, ripe bananas. So good and only about $6.

When you're in the neighborhood, check out Atomic Frog and hang out for a bit. Or hang out even longer.