At a Loss: Rabbit Hole

Exploring the pain of grief

By China Young and Taming of the Review 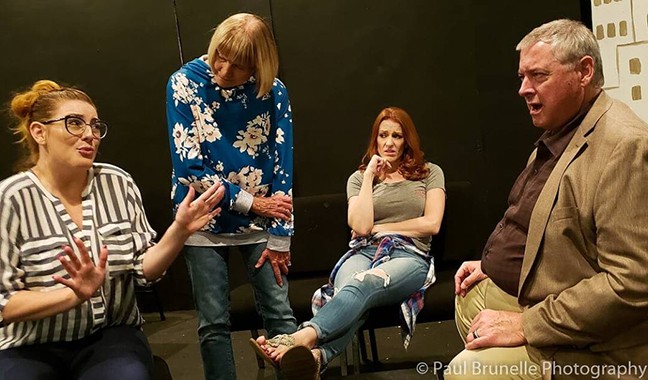 Rabbit Hole by David Lindsay-Abaire is a wonderfully scripted story that explores five individuals processing the loss of a child. This production, directed by Vince Flynn and running at Community Players, is sad, funny, poignant and viscerally relatable. Before I get into any more details, I want to strongly encourage you to go see Rabbit Hole. The night I attended did not have the audience these performers or this story deserve.

Now, the story. Becca Corbet (Meagan Jones), is a stay-at-home mom to Danny, who is killed in a tragic accident at 4 years old. Jones's performance is honest and impactful. Eric Rau brings vulnerability to Becca's husband Howie as he attempts to heal his wife's grief by recapturing the passion they once had even though he is simultaneously holding onto his own grief by privately watching old home movies of his late son. Becca and Howie struggle to find common ground following the loss of their son. They seem to choose different, and often conflicting, methods of grieving as they strive to learn how to live with the pain. Jones, Rau and Flynn never abandon this subtext. Whether it is present in the spatial relationships between the couple or in the inabilityto reconnect to one another emotionally, this struggle is present throughout.

Izzy (Michele Holland), Becca's younger sister, serves as a sort of beacon for second chances. We learn early in the first scene that she is pregnant, something that isn't easily shared considering the family's recent loss. As the youngest sibling, Holland gives Izzy an appropriate amount of "last born" attitude and naivete, though she isn't without her moments of mature profundity.

Nat (Sydney Flynn), Becca and Izzy's mother, has also lost a child, her adult son. Though the circumstances surrounding his death and that of Danny's are significantly different, she can't help but compare the two in her attempts to console and relate to her daughter's loss. Flynn is delightfully natural in her portrayal of Nat, fully embodying the wisdom of someone who has experienced deep levels of grief more than once in her life.

Finally, there is Jason Willette (Stephen Dunham), a teenager who writes a story for the grieving family as a sort of apology for having a role in the loss of their child. Dunham brings a natural innocence and kindness to Jason that supports and motivates Becca's willingness to connect with him.

The technical elements of the show were hit and miss for me, although they did their part to support the world that was created by the director and actors. Sound design was disappointing. In addition to several cues misfiring, I yearned for transitional music, of which it completely lacked. The set, designed and crafted by Scott Berg, Bobbi Whitson, and Eric Everts, is skillfully executed though a bit busy with various patterns and styles. The costumes were simple and modern. There is not a costume designer listed in their program, leaving me to assume that colors and styles were the choice of the actors and they appropriately amplified some character relationships.

Part of our mission of Taming of the Review is to ask "why tell this story and why tell it now?" For me that answer comes as the entire family is discussing the Kennedy family and, unironically, the variety of tragic deaths that the family has endured. Nat flippantly categorizes the private plane crashes and assassinations by crazed gunmen as "rich issues." Despite the humor in it, I found myself suddenly considering all the lives that have been lost to families across this country and across the world to "crazed gunmen." Death, no matter how rich or poor, big or small, old or young, is not a "rich issue." That loss is universal.

The characters in Rabbit Hole are all dealing with loss in their own way. The conflict among them is driven by their lack of acceptance and understanding that every single one of them is grieving differently. This show is a gentle acknowledgement that it is difficult to make space for other's grief, especially if it manifests differently from our own. It also perhaps nudges us to be more accepting of those differences, even while experiencing our own grief. I think it is safe to say our society could use more than a gentle reminder of this as we struggle to understand and overcome our growing divisions on a daily basis.

A longer version of this review can be found at tamingofthereview.com, a female-led, local, diverse, and community-oriented collective dedicated to coverage of Tucson theatre