Arts: What Would Renoir Say? 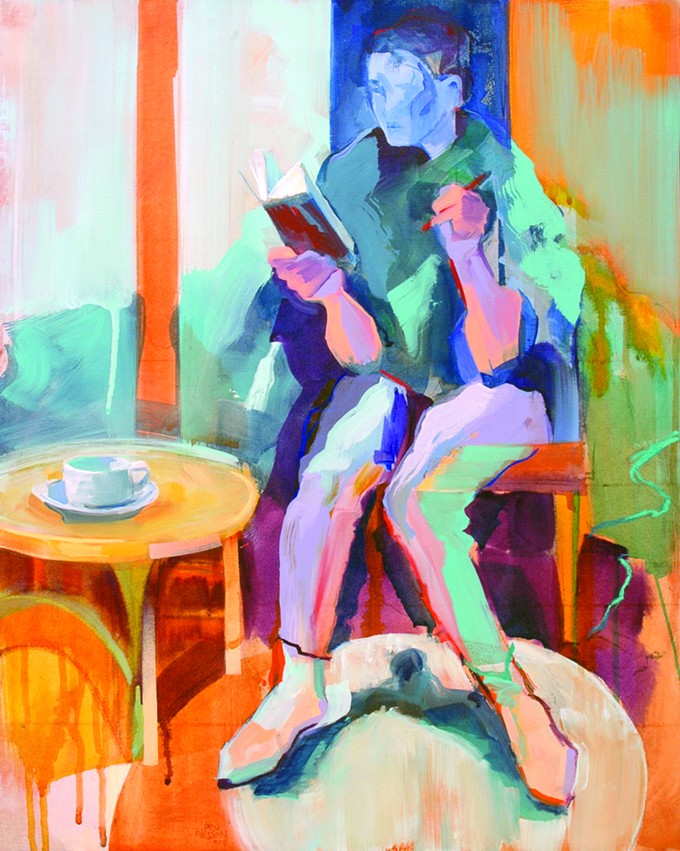 The impressionist Pierre-Auguste Renoir is famed for painting women in general and bare-bottomed women in particular.

I once saw his naked ladies by the dozens at The Barnes Foundation in Philadelphia, which has the largest Renoir collection in the world, 181 pieces strong. To be fair, some of Renoir's painted women are tending children or carrying heavy baskets, but these hard workers are overpowered by the fleshy women lounging in the buff.

His sensuous nudes recline on beds, sit fetchingly in gardens, bathe in ponds. One stands provocatively under a tree, her lips a brilliant lipstick red. All of them are painted in the sunny colors of Impressionism—blue, yellow, pink, white, those shots of red and a pretty peach for the (white) women's skin.

I thought about Renoir when I visited Davis Dominguez Gallery in Of the Flesh – New Figure Works, an exhilarating exhibition of work by three women—Jan Olsson, Bailey Doogan and Judith Stewart, all of whom have a take on the female body that is wildly different from Renoir's.

Like Renoir, Olsson, a native Tucsonan who's became a Parisian long ago, makes paintings of women who seem both very French and very universal. And like the renowned Impressionist, she revels in bright and cheerful colors, from delicate pastels to sturdy coppers and blue.

What she does differently is paint 21st-century women who are intent and intense, intellectually engaged and busy, busy, busy. None of them has time for bathing in ponds, pleasant as that might be. And, oh yes, they are all wearing clothes.

In one of her large acrylic paintings on linen, a young woman is seated in a café, in Paris, no doubt. A coffee cup sits abandoned on a small circular table. The woman is too busy to drink the brew: she's on the edge of her seat, entirely absorbed in reading a book and taking notes. The book is in one hand and a red pen in the other, ready to pounce on the paper moment she hatches a brainstorm.

The painting is all at once both active and static: the woman may be sitting quietly but whole body is taut and on the alert. Her mind is racing, entirely engaged in what she's reading.

Olsson's spirited technique and colors make a perfect match for her lively young subject. The painting is a riot of hues: lavender-blue shadowing the face; a mad geometry of turquoise, pink and lavender coloring her pants; watery orange paint dripping loosely down a wall; a marvelous sunshine yellow flooding the café table with light.

The other paintings—six more big ones on linen and six on paper, all untitled—are in the same vibrant vein, affectionate portraits of modern-day women in colors any Impressionist could love.

Some of the women are walking, burdened down by the stuff of modern life, holding purses, coats, boxes and files. One woman is almost invisible behind her tote bags and briefcase. Another woman is seated indoors, leaning forward, head down, hands clasped, as deep in reverie as Rodin's "Thinker."

Another woman takes a break from working at her desk and still another sneaks in some texts when she's supposed to be studying. In an eerie reminder of the horrors of the last week, with thousands of people in airports, trying to flee the worldwide pandemic, Olsson captures the desolation of contemporary travel, with two women marooned at the gate. Not, it must be said, a subject, that the jolly Renoir would ever have considered.

Bailey Doogan, a much-admired Tucson artist, has long explored women's bodies in her work, in recent years particularly examining the changes wrought by old age. In this show, among other works, she's exhibiting 10 extraordinary self-portraits, all of them relief prints in black and white of her head.

Elaborate networks of spider lines criss-cross her face in nearly all these expressionist images. "Self Portrait II" is a medley of white lines against black; her head leans toward one side and her lips are closed tight, in resignation, perhaps, or acceptance of the physical woes and psychic challenges of aging. In "IX" she tilts in the other direction. Her eyes are closed and she seems more peaceful, moving into sleep or even into death.

Doogan has never hesitated to depict the naked body, in all its flaws and beauty. "A Front," a luminous large-scale charcoal on paper, pictures a self-confident older woman standing jauntily in a beam of light. She's past middle age, her flesh is slack, and her breasts and belly tilt downward, pulled over the years by the demands of gravity. The forthright expression on her face tells us that she's proud of her body and proud of the life it's allowed her to live.

Judith Stewart, a Rancho Linda Vista artist, makes gorgeous sculptures of women that hearken back to the classical world. Their perfect bodies, crafted in fired porcelain clay and sometimes partially burnt, have the air of archaeological artifacts, cracked but still beautiful after centuries underground.

The four clay works in this show are all torso pieces without heads, which intensifies the feeling that they come from the distant past. "Mostly White Torso," colored a lovely milk-white, goes only from the figure's shoulders down to the knees. One leg is fractured, and the arms are missing, but the figure conforms to the ideals of the ancient Greeks, for proportion and pure beauty.

Even so, Stewart delivers interesting contemporary twists, deliberately leaving cloth patterns in the clay, for instance, and adding unexpected touches like the coal-black leg that makes this piece "mostly white."

Nowhere in the show is there any trace of the "male gaze," the art historical tradition of male artists like Renoir looking at female bodies and turning them into art. The three very different women artists here triumphantly overturn that tradition and make their own interpretations of women's bodies.

If he were here today, what would Renoir say?