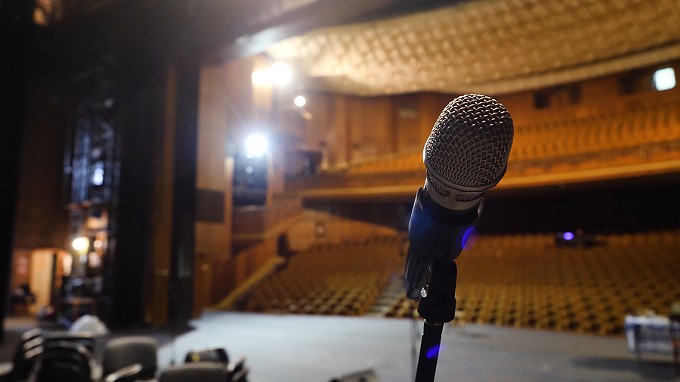 One doesn't need to see the Rialto Theatre's "F U Coronavirus" marquee to know the artistic heart of Tucson has gone silent. Over the past two weeks, the event schedules of Hotel Congress, the Fox Theatre, Arizona Theatre Company and many more toppled like ornamented dominoes. But Tucson is nothing if not stubborn with its art. Even before mass business closures, the community gathered to find ways to support its local nonprofits and performing arts venues.

On Tuesday, March 10, Arizona Theatre Company staff were discussing how to keep their theatre especially clean for shows taking place during the pandemic. But only 48 hours later, their shows were off for the season.

According to ATC artistic director Sean Daniels, several smaller local theatres waited to see ATC's response to the pandemic. As one of the largest theatre companies in town, Daniels says ATC had a responsibility to lead a safe path. Daniels estimates pausing the season will result in a financial hit of one to two million dollars. As a result, ATC has launched a campaign to ask the community to help out. On the very first day, an anonymous donor offered $50,000.

"People have been amazingly supportive of us," Daniels said. "And the thing we're making clear is that everything that we had planned is going to continue to happen, it's just going to be postponed over the next 18 months...The nice thing is that there's a lot of support for the arts in Tucson. People really believe in the cultural identity of it."

Daniels says many of the toughest decisions from the pandemic closures are falling on the freelance and hourly workers. As a result, ATC paid their actors for the next three weeks, despite the shows being canceled.

"We need your support, but so does everyone else. All across the nation, we're going to lose these local places if people don't step up and be a part of it," Daniels said. "I take my daughter to the Children's Museum a couple times a year, so we're going to get a membership just to be able to get money in their hands now—and that's what we're asking everyone to do... The honest truth is that across the country, not all cultural organizations will survive this. So if you have an organization you love, subscribe, become a member, order take-out, do whatever you're able to do."

One of the largest current resources for local nonprofits is the Community Foundation for Southern Arizona. While CFSA prides itself on consistently supporting nonprofits, they've created two special funds in response to COVID-19.

Their Event Relief Fund is to provide financial support to local nonprofits forced to cancel fundraising events in response to the pandemic. On the opposite end, their Community Response Fund provides extra resources for nonprofits which have experienced increased service demands as a result of the pandemic.

"The situation is still very fluid. As the Community Foundation, we're not only helping people contribute to those two funds, we're also in the midst of developing a web page where any donor can go to and support whatever they want to support, because there's a lot of efforts in the community to support people, especially the arts," said CFSA CEO Clint Mabie.

To start the program, CFSA contributed $10,000 to each fund. The community quickly responded, and has already committed more than $30,000 to each fund. CFSA expects to begin distributing these funds to local nonprofits by the end of this week.

"We're seeing different demands every day. But we want to be as responsive as we can to whatever organization applies," Mabie said. "What we also want to encourage people to do, is if they have purchased a ticket to an event, they should call that organization and turn it into a donation rather than asking for a refund. And the same would be for performances. That's the greatest support you can give."

Mabie also mentioned the Tucson Musicians COVID-19 Relief Fund on GoFundMe, made to support local musicians and artists who are out of work during this time. In less than a week, nearly 200 donors have raised more than $15,000 dollars for Tucson musicians.

"As the Community Foundation, we're trying to be a central repository for people to learn about all the initiatives that are going on in the community to support those that have been affected by the virus, which is almost everybody," Mabie said. "The key advice is that you call your favorite nonprofit and just ask how you can help."

At a shuttered Hotel Congress, a GoFundMe fundraiser was created to exclusively support the staff of Cup Cafe, Club Congress and Maynards Market and Kitchen, which are closed for the "foreseeable future." (The Cup and Maynards are offering take-out meals.)

The Fox Theatre is declaring "the show will go on" by rescheduling many of their acts for later this year. The Fox is also aiming to raise $20,000 with help from an anonymous donor who is currently matching all community donations.

"Tucson really prides itself on having these world-class arts organizations," Daniels said. "It's what makes Tucson what it is. So if we come out of this and there's no restaurants or cultural institutions, it won't be the same Tucson. In many ways, this is a fight for our soul as a city."