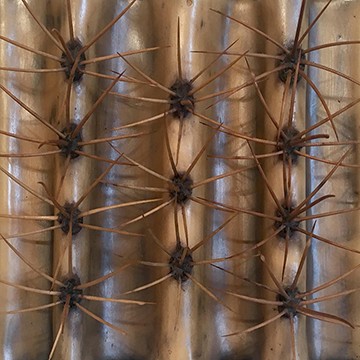 Tucson's premier contemporary galley, Conrad Wilde, is closing its doors in December after a 13-year run.

"I've loved running the gallery," says owner and curator Miles Conrad, "We've had a great time. I'm incredibly grateful to our supporters and the artists. But there's a bit of sadness."

The gallery developed a reputation for exhibiting exquisitely crafted abstractions in eye-popping materials. Glue, plywood, old books, toilet paper, metal shelves, burnt newspapers: anything and everything passed muster as a potential art material at the wild Wilde, and its artists creatively used all of these materials and more.

But financial woes are forcing it to close.

"The gallery is self-supporting but it doesn't pay me a salary," Conrad says, "Now I have two little kids. It's unsustainable."

Conrad moved the gallery again and again over the years, "always chasing cheaper rents." It opened on Fourth Avenue in 2005, migrated to two different storefronts in the Firestone building at Sixth and Sixth, and ended in the Steinfeld Warehouse, which is now hosting the gallery's final show.

An artist himself, working primarily in waxy encaustics paints, Wilde tried to put the gallery on a firmer financial footing by teaching encaustic workshops and selling his own encaustic paints, and inviting in guest teachers as well.

For some five years, while managing the gallery, Conrad took on a second job teaching full-time at the Art Center Design College (now Southwest University of the Visual Arts). Armed with a master's degree, and years of gallery and teaching experience, he's now applying for academic positions.

Despite today's rapid-fire development of high-priced hotels and high-rent housing downtown, Conrad is not entirely discouraged about the future of galleries in what was once proudly called the Arts District. The non-profit WAMO (Warehouse Arts Management Organization), which runs Steinfeld and other properties, has a "mission of preserving downtown arts space," he says. "I see the possibility that new galleries will emerge as more people focus on the arts downtown."

There's one consolation for art fans wild about Wilde: Conrad will continue to curate shows in what he calls the micro-gallery inside Sand-Reckoner Tasting Room, 510 N. Seventh Ave. Currently on view are carved plywood bas reliefs by Yechel Gagnon.

Looking back over his exhibitions, Conrad lists some favorites: Extra Ordinary, featuring recycled materials; High Fiber exhibitions of art made solely of cloth and thread fiber; and the Encaustic Invitationals.

Conrad is proud of curating shows for gallery star Jessica Drenk, a now nationally known artist whose elegant abstractions in paper and pipe attracted his attention when she was still a student at the UA.

The gallery's grand finale plays out with a salon-style exhibition and sale at discounted prices. Works by Drenk and other gallery artists, including Margaret Suchland (collages), Joanne Mattera (encaustics) and Robert Moya (geometric abstractions), will be on view from 6 to 9 p.m., this Saturday, Dec. 1; and from 11 a.m. to 4 p.m., Saturday, Dec. 8, and Tuesday through Saturday, Dec. 11 to 15. Conrad encaustics and other art materials will also be for sale.

Tom Philabaum is extinguishing the flames in his glass studio.

The studio will be shuttered at the end of the year, and a sale this Friday and Saturday may be the last chance to buy blown-glass art by Tucson's glass art king. The final sale will offer up blown-glass works created in the gallery's studio not only by Philabaum, but by a team of studio artists.

"This is our annual Christmas sale," says gallery business manager Marian Chittenden of Philabaum Glass Gallery. "But it's the last one."

Among the offerings are sculptural pieces from Philabaum's Precarious Rocks series, featuring delicate glass globes strung together. Goblets and other functional glassware made by the studio artists will also be available.

The 73-year-old Philabaum, who announced a year ago that he has Parkinson's disease, plans to dismantle the gallery's glass-blowing studio after the New Year. He'll continue making other forms of glass art, particularly the well-received wall pieces that mesh flat slabs of glass with brilliantly colored paint.

The glass-blowing studio, long an attraction for Tucsonans and tourists alike, will continue to be open to the public for viewing on Wednesdays through Fridays, and sometimes Saturdays, until the end of the year. Visitors are welcome to watch the artists at work, as they push lobs of glass into the fiery "glory hole" furnaces. Anyone wishing to see the spectacle should call first to make sure the operation will be fired up that day, Chittenden advises.

While the studio will close, the 36-year-old gallery is expected to continue indefinitely. The current show, Alchemy, shows off Philabaum's recent glass slab paintings, shimmering works of light and color.

Philabaum arrived in Tucson from the Midwest in 1975 and set up a glass and clay art co-op with six other artists. In 1982, he and his wife Dabney opened up the Five Points gallery and studio. Since then, as his own reputation grew, he become n champion of the art form, exhibiting glass art by many artists from around the country.

Contreras Gallery kicks off Milagros, its popular annual holiday show, this Saturday night. A bevy of 18 Tucson artists have created works based on Mexican ex-votos and retablos, religious works designed to thank a heavenly being for a favor or to petition for a cure. Gallery co-owner Neda Contreras, master of the form, typically places her charmingly naïve figures in recognizable Tucson settings. The opening is 6 to 9 p.m., Saturday, Dec. 1; the show runs through Jan. 26.