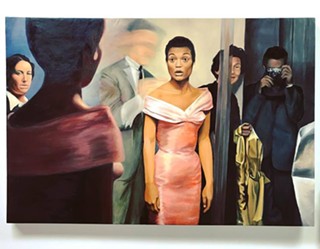 Ever since Laura Pendelton put a large painting of the singer Eartha Kitt in her living room, curious art lovers have been peering into the window to get a better look.

And more often than you'd expect, they knock on the door and "ask me if they could come inside to see it," Pendelton says with a laugh. "Everyone has a different take on it."

No wonder the neighbors are curious. The painting is riveting.

The painter is Allison Miller, a young Tucson artist of color better known for her murals than oil paintings. She based the photo-realist Kitt painting on a complicated photo from 1961 featuring a cast of six, including two Eartha Kitts, one a live image, one a mirror image. Expertly painted, it could be an old master work in modern dress.

"I was drawn to the little (Kitt) photo on Instagram," Miller says. The photo is "not mine but I repurpose it and give it a new context that tells a new story or revitalizes an old story."

A renowned French designer, Givenchy, had dressed Kitt in high fashion couture, and photographer Tony Vaccoro captured the singer in a glamorous pink gown. We see Kitt from the back; she's looking at herself in the mirror, seemingly startled by her own beauty. Givenchy is blurred in the glass, Vaccoro's face is deep into his camera and one of the two white female assistants smiles cheerfully.

But a second assistant aims an angry gaze at the beautiful Black woman.

Miller says she painted that resentful woman again and again, trying to get her just right.

"She's maybe representing the whole era," she says. Even if Kitt was mostly honored in Paris, racism was still the norm. Among other things, the painting asks how much the world has—or has not—changed in the 60 years since that photo was taken.

If you want to see the painting yourself, you don't have to peek into Pendelton's house. You can see "Eartha Kitt" in a virtual exhibition created by David Andres at Pima College West Campus Bernal Gallery.

The show, Rethinking Social Justice, features two artists. Miller exhibits some 27 works, including eight oil paintings, mostly of black women, 14 murals and five pen-and-ink drawings. Alfred Quiroz, a nationally known artist and a Professor Emeritus who spent 30 years teaching at the UA, contributes nearly 100 works. He includes paintings about his barrio childhood, murals on the border wall in Nogales and paintings from his rigorously researched Presidential suite, which portrays U.S. presidents as craven and corrupt.

Inspired by the protests after the killing of George Floyd, curator Andres says he wanted to invite artists of color whose work examined "social consciousness."

Miller, a Black woman in her 30s, and Quiroz, of Latino and Yaqui heritage, both grew up in Tucson. They've both worked on community. And they have at least one other link in common: Miller studied art at Tucson High, taking classes for four years in drawing and painting from her father, David Miller, now retired. David, in turn, studied under Quiroz at the UA.

Miller went to Brooklyn College, majoring in sociology, with plans to be an artist who could also get a day job. She had already gotten excellent art training in Tucson, she says, at Tucson High and at an afterschool program run by the-then Tucson Pima Arts Council that paid teens to learn art after school.

"That was super valuable," she says. "I always painted after high school. I never put down my brush."

Back in Tucson after college, Miller worked at nonprofits, as planned, and she also jumped into the city's burgeoning mural scene. She may be best known for a giant butterfly mural that promoted the Arizona-Sonora Desert Museum's pollination research. Painted on the Frontage Road of 1-10, between Congress and 22nd St., the project was completed in six days with the help of 160 volunteers.

Just last year Miller got the Buffalo Exchange Art Award for her community work and she's been pondering the possibility of using the prize money to do a mural project with school kids who have suffered under COVID restrictions.

The virtual exhibition highlights murals like the popular Greetings from Tucson sign and the charming works for the UA Poetry Center, with flying books in one and kids cavorting with poems in another. A new Aretha Franklin, dressed in a billowing red wrap, looks poised to sing at the Hotel McCoy. That mural, a joint project between Miller's Ally Cat Murals organization and Matt Wood, went up late in the pandemic year.

Resistance is her show's theme, she says, as you can clearly see in her exquisitely drawn protesters, rendered in ink on paper, and in the oil-on canvas portraits of Angela Davis and Corey Long, a Black man found guilty after the Charlottesville riot.

But there are other works that demonstrate a more "subtle undertone" of resistance, she says. That would include the painting of Anne Easley, one of the Black female "computers," math wizzes who sent astronauts to the moon. And it also applies to Miller's Nina Simone and her Franklin singing their hearts out. Not to mention her extraordinary Eartha Kitt standing proudly in Paris, and everywhere.

Find the show at https://sites.google.com/pima.edu/rethinking-social-justice/home