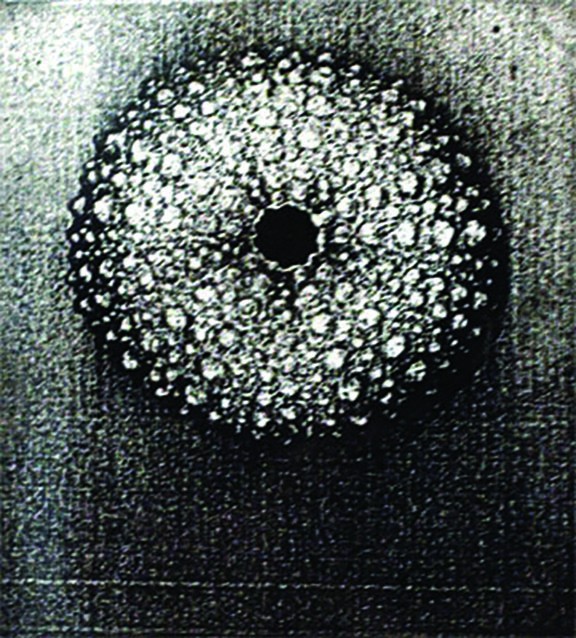 For "Purple Sea Urchin," Andres mounted an image of the urchin's skeleton in black and white. Stark and round, it beams with the power of a full moon.

"Sea of Cortez Collection" is a visual catalog of the sea's animal treasures. A pelican's peek, complete with teeth, lies on the bottom of the print; above is the swirling spine of an eel. Bits of gorgonian coral are on the side and so is spiny seashell.

In many years of scuba-diving and sailing in its waters, Andres learned of the dangers posed by fishing lines and nets. The lines, he says, are tossed back into the sea, trashing the water and trapping sea creatures underwater, where they die by drowning. Gillnets, illegally used by fishermen, trap the critically endangered vaquita porpoise under water, leading the tiny animal ("a beautiful species," says Andres) to death by drowning.

Julia Andres, another artist in the show, has a pink-tinged beauty in her "Polymita picta de Cuba." An homage to the late painter Nancy Tokar Miller, the print pictures a grid of Cuban snails once harvested by Miller and bequeathed to Julie.

The two Andreses, a married couple, both use the photo gravure polymer technique to make their prints. This many-step process goes back and forth across art history, beginning with an up-the-minute digital scan of the object, sashaying back to the antique photo method of exposing a negative to the sun, and then going farther back in time to the time-honored printing press.

In fact, the exhibition's raft of prints, created by its 17 artists, is a primer in multiple print techniques available to artists, from linocut and etchings to silkscreen and collagraph and beyond.

Jack Davidson's etching of an expressionist procession allows for a lovely range of grays, from white to black, and a back-and forth between shadows and lines. Ruben Urrea Moreno used wood block—in which lines are chiseled out of the wood and then inked—to create "Before the Immigration," a nostalgic drawing of his Mexican forebears standing in their Sunday best in front of a cathedral decades ago.

And Priya Vadhyer goes for a colorful abstraction in a monotype, while David Midel turns comic in a black-and-white silkscreen of a starlet in dark glasses trying to hide in landmark locations in downtown Tucson.

in the hot months, raices 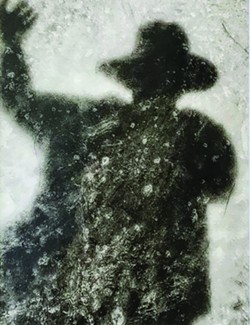 Taller Gallery, just down the street from Contreras, typically puts up its two iconic exhibitions, Mujeres, Mujeres, Mujeres, the annual women's show, and ¡Chubasco! A Monsoon Exhibition, which, truth be told, didn't have much impact in this driest of summers.

But this summer's third show has a new theme Historias e Identidades (Histories and Identities).

"We were asking the artists to make works about identity, community and culture," says gallery co-director John Salgado.

The call to artists yielded 42 works. Many artists made personal pieces, about grief, infertility and illness, but Linda Bohlke merged the personal with the political in her small photo "Life's Witness."

Bohlke recently lost a friend to drowning. The woman died in an Atlantic rip tide, and Bohlke mourned her across the country at the Pacific's edge. Watching the ocean's spray and seaweed and sand surging in and surging out, she writes in an artist statement, she thought about the "fragility of life."

But the artist, who often makes politically oriented work, also remembered the Salvadoran toddler who lost her life in the Rio Grande this summer, her little hands wrapped around the dead body of her dad. The photo that came out of Bohlkde's grief over all these drownings deaths pictures a blurred gray figure against pale water, with one arm thrown outward. The figure is ambiguous, though: it's either rising up above the currents to safety—or falling down forever into the deep.

Changing the mood, the cheerful "Community Kitchen/Prepare the Feast," Lydia C. Maldonaldo celebrates Yaqui heritage in acrylic paint. Two Yaqui women are making tortillas in 55-gallon drums on the sidelines of the annual Yaqui Easter ceremonies. The tiny, soft-edged work, just 9 by 7 inches, conjures up the night in starlight blues; it also speaks to the comfort and power of long traditions.

Photographer Kayleigh Kozyra doesn't go for the pretty in her black-and-white photos. Her sharply angled scenes show an old motel now surrounded by chain link and, in another, an abandoned restaurant alone on a desolate street corner. Her artwork hints at the disorientation that ensues when a city's familiar buildings decay and vanish.

Quite a few of the pieces are inventive mixed-media works that incorporate found objects. In Patrick Hynes's "In My Shoes: Comedy and Tragedy," a pair of old bruised leathers framed and hanging on the wall, testify to the ups and downs of life.

Janice Hernandez's "Hope Deferred" is a painful piece about her struggles with infertility. It deploys a number of Catholic icons—an oil painting of St. Anthony embracing a child, a Palm Sunday cross and a childlike angel—alongside a lock that doesn't open and a lamp whose flame is flickering out.