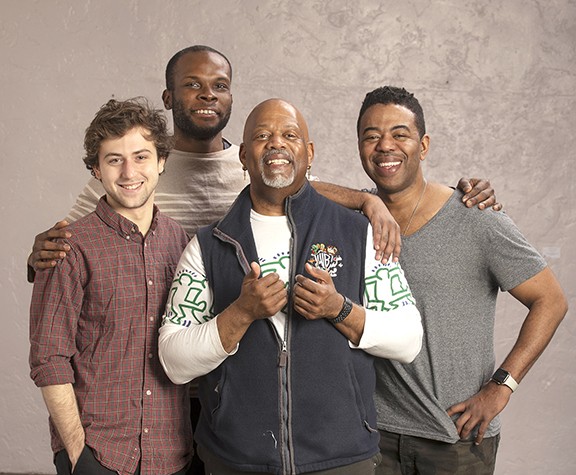 “Master Harold” … and the Boys

Arizona Theatre Company
Play opens Friday, Jan. 24, at 7:30 p.m., and continues with 18 performances though closing night Saturday, Feb. 8, at 7:30 p.m. No shows on Mondays. On Thursday, Feb. 6, the 2 p.m. matinee is audio-described and open-captioned. The 7:30 p.m. evening show on Feb. 6 is signed in American Sign Language. For other disability accommodations, contact the box office.
Temple of Music and Art, 330 S. Scott Ave.
Tickets $40 to $70.
Tickets for the final preview performance, Thursday, Jan. 23, are discounted to $24 to $55.
622-2823; arizonatheatre.org
Play runs one hour and 40 minutes with no intermission EXTRA: The show moves to Phoenix, with one preview performance, Thursday, Feb. 13. The play opens Saturday, Feb. 15, and closes March 1.
Back in 1982, when Athol Fugard's play "Master Harold" ... and the Boys first hit Broadway, a New York Times critic got it right.

The drama, a stunning work set in apartheid-era South Africa, "is likely to be an enduring part of the theater long after most of this Broadway season has turned to dust," Frank Rich wrote.

Rich's take was prescient. Originally banned in South Africa, the play has been performed all over the world, winning awards in New York and London, appearing in a TV adaptation and undergoing a revival on Broadway in 2003.

This Friday night, Arizona Theatre Company opens its own production, at a time when the U.S. is undergoing its own wrenching battles over racism and inequality.

Apartheid was abolished more than 25 years ago, but the 38-year old "Master Harold" is as timely as ever, says director Kent Gash.

"With its issues of class and race, the play feels like it could have been written 10 minutes ago," says Gash, a sought-after theater pro who previously directed Ain't Misbehavin' and Five Guys Named Moe at ATC.

The play approaches the horrors of apartheid subtly and slowly, zeroing in on the relationship between a white teenage boy and the two middle-aged black men who helped raise him. Their story is congenial—until it's not.

"The brilliance of the play is that it is less about apartheid and racism and privilege than it is about how a boy becomes a man," Gash says.

If you're white, like the play's young Hally (Oliver Prose) "there's a moment," Gash says, that you can rise above the way you've been raised and make a different life for yourself.

Or you can just embrace the prejudices you've been taught.

Fugard, now 87, has said the play is semibiographical, written partly as repentance for his own behavior as a boy in South Africa.

The 100-minute play, performed with no intermission, takes place on a single rainy afternoon in a tea shop owned by Hally's mother. The year is 1950 and apartheid is firmly entrenched. The two black men, Sam (Ian Eaton) and Willy (Odera Adimorah), are household servants who also work in the tea shop.

On this particular day, the men are in the shop practicing some dance steps for a competition when young Hally comes home from school. The three enjoy each other's company, laughing and joking as the rain falls outside. But news of a family crisis dramatically ruptures their camaraderie.

Prose, a 22-year-old wunderkind who just graduated from NYU's Tisch School of the Arts, says that his 17-year-old character is "aware of social reformers and he thinks highly of them. But his actions don't coincide with that."

Hally reminds him of some young people today.

"It's the way people of my generation are on social media," he continues. They may write rants online about injustice "but they don't do anything about it."

Born after apartheid had been snuffed out, Prose finds the play "unbelievably relevant. It's hugely racially charged."

Even so, none of the characters are stereotypes, director Gash says. Each one is humanely drawn by the playwright.

"You find yourself caring about all three people. They are compelling. You're invested in them. And you're caught up in the story. It's an extraordinary piece of work."

The play is difficult for the actors, and not only because all three had to learn dialect—Prose taking on a variant of Afrikaans, the Dutch-based language of many South African whites, and Eaton and Adimorah speaking one of the many black dialects. And the two men have had to practice dance steps.

Hardest of all is the taxing subject matter, Prose says. "Our director tells us doing this play is difficult. Take time to decompress in the evening."

Eaton has a robust track record in film, television and theater—he recently played Othello at the Seeing Place Theater in New York and Walter in A Raisin in the Sun at Stanford Center for the Arts. Adimora, armed with a recent MFA in acting from Columbia University, has been getting roles in NY theaters.

"They have life experience and skills to do a lot of things," Gash says. "They are both fantastic."

Once apartheid ended, some admirers of the play wondered if there was still a reason to perform it. But Fugard took care to make the play universal, with lessons that apply to everyone.

"Yes, it's a play about South Africa, but it's also about now, and our families and the daily choices we make," ATC artistic director Sean Daniels says in press materials. "It's why this is one of the great plays of our generation." /p>