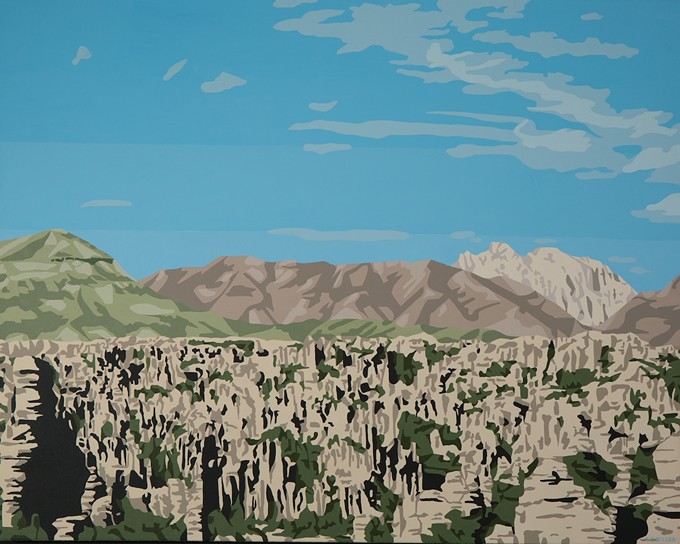 Through Aug. 12
Tohono Chul Park Exhibit House, 7366 N. Paseo Del Norte, one mile west of intersection of Oracle and Ina.
Exhibit Hall open 9 a.m. to 5 p.m., seven days a week. Gardens open at 8 a.m. Closed on the Fourth of July.
$13 regular; $10 students, seniors age 62 and up, and active military; $3 children ages 5 to 12; free to members and children under 5. Admission fee includes entry into the gardens. Free admission for all to restaurant and gift shop.
742-6455

I was born practically on the banks of Darby Creek, in a hospital up slope from the stream, and it's only a slight exaggeration to say that its meandering waters drew the map of my suburban Philadelphia childhood.

We used to play in the woods along the creek in the summer, and skate along its frozen ice in the winter. The neighborhood pool my family went to was close to the creek, and one of its tributaries, Naylor's Run, flowed near my high school.

Darby Creek travels a good distance, 26 miles before it empties into the mighty Delaware River, threading its way in and out of daily life. But it's in a township that's high on ugly roads and shopping centers and low on preservation, either of the natural landscape or of historic buildings.

Still, that creek, trashed in places, beautifully preserved in others, was the nature we had. From my earliest days, I knew only the well-watered eastern woodlands; they're my natural habitat.

So I had as much trouble as any eastern transplant when I landed in otherworldly Arizona a few decades ago. Instead of soft green grass, rolling hills, sheltering shade trees and water everywhere, I found prickly cacti, hard-edged mountains etched against vast blue skies, a parched desert filled with surrealist plants and rivers as dry as dust.

Arizona Otherworldly, an exhibition at Tohono Chul Park, is all about the strange formations that Arizonans, natives and newcomers alike (including me), learn to love. Water, a rare wonder here, is conjured up by only a few artists in the 29-person show. "Monsoon," by Beata Wehr, honors the summer rains in a small encaustic painting, sweet abstraction of blue rain falling on a plane of yellow light. And Barbara Kemp Cowlin painted a pool or water in Monet-like colors.

Most of the art celebrates more commonly seen marvels: Technicolor mountains, star-spangled skies, saguaros, clouds. And rocks. My husband warned me after a job interview here that our prospective new state looked like the moon, and that was before he ever saw the startling rock formations in the Chiricahuas.

Carson Bilger's two Chiricahua paintings are the most moon-scapey of all 49 of Otherworldly's works. Besides the standard vast cerulean sky, Bilger's "Cochise Head" has a wild field of twisty gray rocks spiraling up from the earth. Topping off that marvel is the giant rock head atop the mountain in the distance. Resting in profile high above the lands that were once Apache, it's said to be an image of Chief Cochise, the indefatigable 19th century Apache leader. That's the kind of moonscape even a Philly girl can get behind.

Walking in the Sonoran Desert on a winter's day just before dawn, photographer Manuel Fontes found another human figure etched into still another Arizona rock. A petroglyph of a figure with both arms lifted high, Fontes shot it just as the rising sun flooded it with color. He named it "Hohokam Solstice" in honor of the early Arizonans who lived here up to around the year 1400.

Arizona's signature saguaro (which I pronounced with a hard "g"—like guapo—for almost a year after I got here) gets plenty of loving attention. In "Reach for the Stars," photographer Karen Wright takes an ant's-eye view of a giant specimen; her clever on-the-ground perspective makes the saguaro appear to be soaring straight up to the velvety night sky.

Other photographers also rebel against the usual sun-dappled saguaro. Patrick Cobb's "Tumamoc Terrarium No. 2" shot the lush cacti of that excellent desert oasis on a rare foggy day in February. Tumamoc Hill's healthy specimens look bent and chilled in the gloom. David Griffin photographs his saguaros in the snow. His "Freezing Over" is a lovely, delicate black-and-white image of snow-topped saguaros standing among prickly pears and barrel cacti.

Cotton-ball clouds dominate Linda Ekstrum's "Dangerous Beauty." You could swear this color work is a painting of a fantastical and imaginary desert scene. But this view of an amazing mackerel sky, with scads of fluffy clouds "descend[ing] on the Catalinas," is the real thing, Ekstrum says, made more magical by the use of an infrared camera.

Going back down from those high-flying clouds to the desert floor, Spencer Edgerton lionizes the lowly by making it big. His "Large Devil's Claw," crafted in stately bronze, presides on a pedestal. It's about six feet across and maybe four feet high, a grand size for the little seed pod that clings to shoes and passing animals, and has a starring role in Tohono O'odham baskets. Patrick Hynes picked up another lowly desert find, a thick section of tree trunk that looked kind of human, and polished it into "Hercules."

William Lesch provides the Technicolor mountains in long horizontal photos of Gates Pass, blazing in hyped-up, unworldly oranges and blues. Printed on aluminum, they're timelapse works that record the brilliant colors that emerge over day and night.

Beata Wehr, who made the "Monsoon" painting, addresses the prized desert light, turning it into radiant abstractions in lemon yellow. "Horizon Line" is a field of joyous yellow that gives way to rusty red running across the high horizon. "Small Yellow Desert" has delicate lines across a cascade of yellows and ochres and soft orange.

And what about the beautiful night sky, which grows even more beautiful the farther you get from the electrified cities? Robert Renfrow has glorious fun with night-flying moths in the dark skies over Patagonia, making two more-than-magical color photos of the insects' lit-up aerial trajectories.

I got up early that blood moon day to catch the sight that Breakey immortalized. Finger Rock was to the north, and that ruby moon to the west; the mesquites we planted shimmered in the early morning light. It was a gorgeous view at break of day of sky and mountain and land, and I saw all this beauty in my own Arizona backyard.