Things Being What They Are has a fun, if somewhat tired, sitcom feel 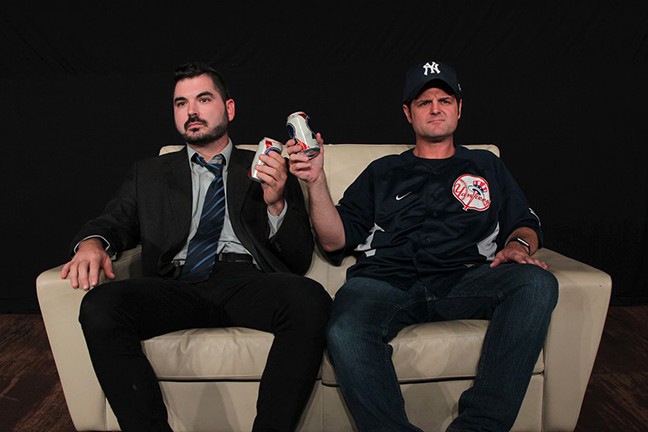 Courtesy Photo
Steve Wood and Stephen Frankenfield in Things Being What They Are.
Live Theatre Workshop's production of Things Being What They Are, written by Wendy MacLeod, gives you the feeling that you are drop dead in the middle of an early 2000s sitcom. Bill (Steve Wood) is a marketing executive who is intelligent, tasteful and a little sensitive who has just moved in down the hall from Jack (Stephen Frankenfield), a beer-drinking and self-proclaimed jackass. Jack spews every type of emotional baggage on Bill's doorstep including his ex-wife and her new relationship, cancer and a dark secret. Bill has his own emotional baggage as well, namely his deteriorating relationship with his actress wife. Over time the unlikely duo bond over the fear of death, loneliness, and failure.

The direction by Samantha Cormier and acting by Wood and Frankenfield were the highlight of this production. Wood was believable and charming as the "utterly lame" Bill. Wood's portrayal of the anxiously loyal Bill created a true sense of denial. He really loves his two-timing wife and you know right off the bat that Bill really wants her to come back from her "acting job." Frankenfield's portrayal of the middle-aged New Yorker Jack was insensitive but extremely human. Even though I despised what came out of his mouth for the majority of the show, I still felt for his character and genuinely wanted a positive outcome for Jack and his family. I was impressed and moved by both performances by the comic-like actors.

The sound design by Brian McElroy left me feeling nostalgic from the moment I walked into the space and the scenic set design by Jason Jamerson and lighting design by Richard Gremel created the sense that we were actually a live studio audience and in a small way part of the action. I don't know if this was the designers' intent but added a wonderful layer to the dark comedy.

This play is essentially a study of middle aged manliness and the emotions and feelings men try to hide behind a macho facade. The writing by Wendy MacLeod is fairly sophisticated, with wry observations and subtle literary references. The characters mention feeling like Didi and Gogo from Waiting For Godot at one point, which is actually quite witty considering the crass manner of the show. Unfortunately, MacLeod went a little too far to make her characters vulnerable and relatable at times, which made the play lose dramatic impact towards the end of the second act.

Despite the positive and entertaining aspects of the show, I was mostly disappointed or maybe confused by the way the women, who you never see in the show, are written. They are flat stereotypes; emotionally distracted women who are unable to make up their minds about anything. They are blamed as the main reason for Bill's and Jack's lives being ruined or wasted. They bond over their shared "misfortunes" when really they aren't taking responsibility for their own actions and lives. This aspect alone made me feel a bit uncomfortable at times.

I'd like to say that the writing was also a bit dated in the sense that it jokes are inappropriate, especially those about people who are overweight. The "humor" paints them to be an inferior human or simply an object of a bad joke. In 2019, I have to ask if this type of humor, especially when it isn't called out or used as a more than bad comedy, is still worth having on our stages. This leaves me questioning if a comedy about two white males in the early 2000s was an appropriate choice for the present.

Live Theatre Workshops production of Things Being What They Are will get you thinking about your own relationships, friendships, and maybe even your own mortality with some chuckles and laughs along the way.   ■