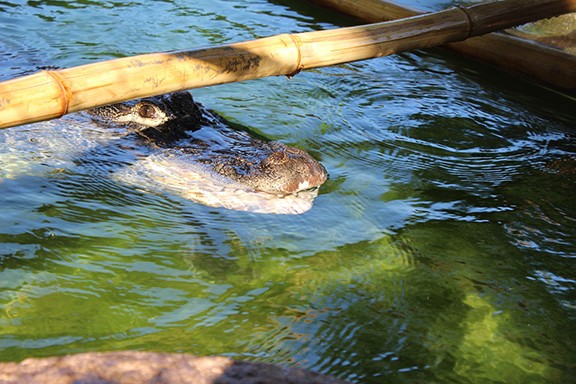 Jeff Gardner
Bayou the alligator.
When Bayou the alligator opens his mouth and reveals a set of sharp teeth, there's no question he's an apex predator. But, even a nine-footer like Bayou enjoys and needs time to play.

The Reid Park Zoo takes animal enrichment seriously, providing its residents with various opportunities to engage in behaviors they would normally do in the wild.

The zoo will highlight the important role of animal playtime in its next installment of the Summer Safari Nights program. Guests who attend will learn and witness how animals like lion-tailed macaques, goats, alligators, rhinos and squirrel monkeys play through foraging for food and other treats.

Bayou, a 26-year-old American alligator, spends most of his days at the zoo basking in the sun or lounging in his pool. Currently, he is fed three days a week and enjoys a variety of foods including guinea pigs, trout, chicken, rabbit and quail. One of his special treats are specially made biscuits for crocodilian species.

Zookeeper Ashlee Betche said it's not only fun for the zookeepers to watch Bayou forage for treats, it lets him mimic foraging behaviors from the wild.

"With the croc biscuits, we'll throw them in the pool and let him forage; he just loves foraging and he'll just swim all around," Betche said. "We have started giving him ice popsicles and it's really cute because we plop it in and he pushes it around the whole pool."

Betche feels it's important for zoo guests to see Bayou at play because it helps people better understand his real nature.

"When you think of alligators, mostly you think of these kind of scary predators that want to attack people and that's not the case at all," she said. "It's good for them (guests) to learn about them and see that gators aren't vicious animals who just want to eat everyone, that they are inquisitive animals that have personalities."

Enrichment is different for each species, and the zoo staff are constantly working on new ways to engage the animals.

Animal Care Supervisor Rebecca Edwards said enrichment is all about getting animals to interact with each other or their environments.

"One of the big challenges with enrichment is making it novel for the animals, where keepers have to be creative to come up with new things, new ways to present food, new things to get them to engage in different behaviors," she said.

The zoo's pair of lion-tailed macaques, Hadji, 27, and Beanie, 31, get their enrichment from a series of food puzzles, slow feeders and hidden treats. Their favorites include wax worms and bananas.

Zookeeper Julia Beres said they have an important social hierarchy that is taken into account while creating enrichments.

"Our male, Hadji, is a little bigger and he tends to be more dominant, so if I only provided one forging space he would kind of monopolize it," she said. 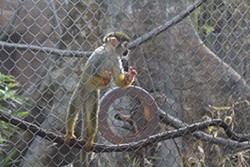 The smaller squirrel monkeys, who just moved into a new enclosure in April, also experience enrichments that encourage social interaction.

Of the four, 1-year-old Dazzle is the dominant female of the bunch, and she vocalizes often with 4-year-olds Glitter and Sparkles, and 1-year-old male Parker.

Squirrel monkeys are quick, using a series of chirpy vocalizations to find each other and communicate. They live in South and Central Americas and while their population numbers are strong, they are declining. The zookeepers have to ensure there is something for them at every level of the enclosure because they use the space from the ground all the way to the highest perch.

Edwards believes guests enjoy watching animals at play and can learn a lot about natural animal behavior through observing them foraging for treats or enjoying a special bath.

"Our zookeepers work really hard to be constantly changing things up and making it new, enhancing their environment," she said. "It's fantastic that (zoo visitors) get to see all the natural behaviors they would be doing, see them engaged in their environment, and it's a lot of fun to watch, especially the social interactions." ■

The next installment of Summer Safari Nights about animal play takes place this Saturday from 6 to 8 p.m at the Reid Park Zoo, 3400 E. Zoo Court. Entertainment will be provided by RUFF Mix. Tickets are $10.50 for adults, $8.50 for seniors and $6.50 for children between two and 14-years-old. Free for members. Tickets can be purchased online. For more information on the summer-long event visit www.reidparkzoo.org.