ATC’s production of Outside Mullingar is charming and funny 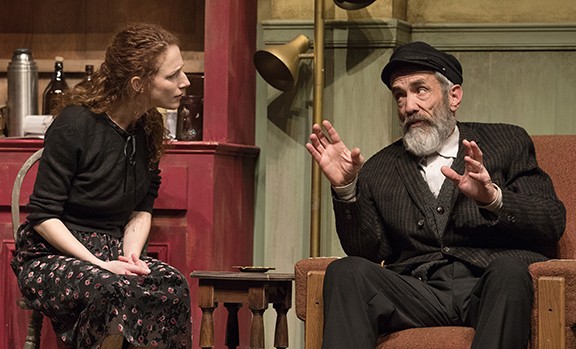 With each Irish brogue-accented expletive, plentifully scattered throughout John Patrick Shanley's charming, light-hearted play, Outside Mullingar, the characters express exasperation, cheery disgust or a cry for help—or sometimes all three.

Arizona Theatre Company has mounted a more-than-respectable version of Shanley's play, a recent effort from a writer probably most widely known for his screenplay Moonstruck, starring Cher and Nicholas Cage. That won an Oscar in 1988. Doubt, a play dealing with the nasty business of sexual abuse of children by priests in the Catholic Church, won four Tony Awards (including Best Play), as well as the Pulitzer Prize for Drama in 2005. The script was fashioned into a screenplay in 2008, and Shanley himself directed the much-awarded film starring Philip Seymour Hoffman and Meryl Streep.

Although Shanley has said he has intentionally shunned writing stories awash in Irish culture and folks, he wrote Mullingar after having visited his father's homeland late in his dad's life. That visit informs the play in both actual and fictional ways.

Mullingar is about family as a collective force, as well as the individuals who comprise and are often at odds with it. With humor and sometimes lyrical dialogue, the piece underscores the often unhappy truth that the boundaries between The Family and an Individual Member are always porous; what we'd like to consider as two entities are pretty much inseparable, although we often go to great lengths to declare our distance. Shanley's story is also about shame and secrets and the high cost of hiding them.

Sweetly, and with a strong dose of the romantic, it's also a celebration of the magic that happens when those secrets are sprung, released and given voice.

And it's all delivered with great humor. Shanley's applies a light touch to illuminate the standard gloom we see so frequently in stories about The Irish.

We are invited into the brooding, rainy afternoon of the the funeral of Christopher Muldoon, a farming neighbor of old Tony Reilly (John Hutton) and his son, Anthony (Larry Bull). Muldoon's widow, Aoife (Robyn Rodriguez), has taken shelter in the Reilly's farmhouse kitchen, where the conversation bounces around in the soggy, gray afternoon from death—of not only Muldoon but of babies who seem to shrink after birth "like a sock in the laundry"—to old Tony's anticipation of his own reckoning with the Grim Reaper in, oh, a couple of months, he thinks. Middle-aged Anthony becomes aggravated with the talk of death and the mention of his only girlfriend who left him long ago. This is compounded with the subject of Aoife's daughter, Rosemary (Cassandra Bissell), who, Aoife claims, hates Anthony because he pushed her into the mud when she was 6 years old, never mind that was 30 or so years ago. Tony's pronouncement that he doesn't intend to leave the farm to his son sours the afternoon further and Anthony seeks solace in the downpour.

By now we might suspect that there's some romance in the forecast as well as more rain. But we probably don't suspect at all the nature of the secrets that might be revealed on the approach to lovers' lane.

The David Ivers-directed production is a fine one. Ivers is the new artistic director of ATC and this is the first chance we've had to see his work. Mullingar stands as exhibit A that we can venture that his leadership will be outstanding.

The cast he's collected is also fine. Hutton as Tony gives us more than merely the outlines of a lovable old coot. He shows us his stuffings as well, and a touching scene with Anthony reveals a soft heart without letting go completely his hard-headed cantankerous self. Rodriguez gives us an agreeable if not remarkable Aoife. The character of Rosemary needs to be lively, strident and sometimes over the top, and that's exactly what Bissell gives us.

Anthony is a tough character to inhabit for an actor, because he is so shut down. We have to see the struggles within a non-demonstrative personality, and that's a tough chore. But Bull does it quite well, never betraying his inner struggles, which read richly in his slumping, brooding physical presence.

Shanley is a prolific writer and has met with both success and the other end of that see-saw. But when he's up, he soars. He has a great ability to create a story of many textures: laugh-out loud funny, achingly real and sometimes more than a little disturbing. Here, Ivers and his crew have found a rhythmic reaching and retreating of each character's individual truth and each's subjection to familial oddity. This dynamic is the universal foundation for family in all cultures. Shanley has imagined it pretty perfectly and ATC has embodied it pretty perfectly as well.