An Adventure in Theater 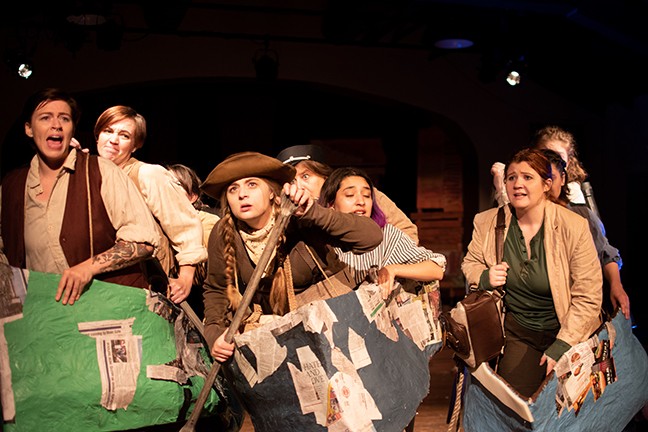 A brash and boisterous mess!

Men on Boats. It's a play. Or more relevant to this discussion, it's a particular production of this play.

Oh. What's it about?

The nine men, under the leadership of John Wesley Powell, who charted the Colorado River through the Grand Canyon. In 1869. It's based on Powell's diaries.

Well, yes. And here's a curious thing. There's not a single person of the male gender on stage.

There's this playwright: Jaclyn Bauhaus. She's pretty well thought of. She has this idea that much of history is quite skewed because it's all about the exploits of men, told by men. It's sort of that his-tory/her-story thing.

There's certainly substance in that. So by crafting the play with women playing men, she was trying to explore that idea?

Did it work? Her exploration of this piece of history about JWP plus nine men in women's bodies?

Huh. Were they called by men's names?

Did they try to imitate men? You know, acting masculine. Spitting tobacco—

That action is not peculiar to gender. But, no, it wasn't like that at all. That would work against what seems the playwright was getting at.

Who did this play, brought to intriguing but not fully revelatory light?

I think I hear a "but" coming.

Well, yes. They just don't seem able to bring us consistently effective productions of those plays.

Yeah. But I think they should keep trying. On the other hand, I think I have to call 'em as I see 'em.

Sure. That's your job. So, what didn't work?

For one thing, it was just too, uh, chaotic and unwieldy.

For one thing, it was at the cramped Cabaret Theatre space at the Temple of Music and Art.

So a small space to begin with.

Right. And director Jasmine Roth used every inch of available space. Even some space that wasn't really available. The action was everywhere.

Oh, oh! It sounds like maybe she was going for that concept—oh, what is the buzzword? Immersive.

Yep. I was actually afraid the audience would be immersed by buckets of water representing the river's rapids the men were negotiating in their boats! 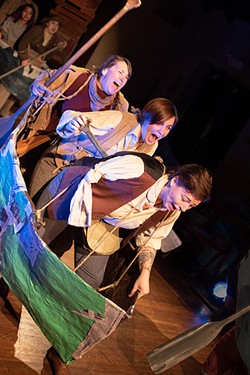 Of course! Remember the title?

They were pretty great, really. Made of paper maché and duct tape sort of thing. The men wore them, sort of like overalls. They stepped into them, put ropes that would keep them on around their necks, and their legs sticking out the "bottom" so they could move around. Fun idea, for sure. But in that space? And they had to keep getting into them and then out of them. In and out. In and out. Very unwieldy. And more importantly, time consuming. Damn, that first act was long.

Oh yeah. I'm thinking there might have been other ways to suggest boats. This way was so repetitious and clunky. When things needed to be really precise. Boats. Make camp. Boats. Camp. And part of the trouble there was that, depending on where you sat, the place designated as camp made it difficult to see and hear what was happening there. Anyway, the boat/camp/boat/camp was so repetitious that it became predictable and boring.

And it didn't seem they were getting anywhere. There wasn't that calculated tension necessary in story building. And OMG, was there screeching!

I don't think men would screech.

These men did. I felt assaulted. It just wore me out.

How was the acting?

Pretty good. Mostly a talented group. However, talent alone isn't effective. You need skill. Most of these guys could especially use some vocal training. Particularly how to place their voices from their guts instead of their heads. And diction! Please!

Oh sure. The script is interesting. But I'm not sure it does what it intended. Not here, anyway. The actors embraced the script and their characters quite passionately. And often ably. And they and the director did find humor along the way. Oh! And the sound design and execution by Mike Saxon was terrific!

You think folks should go see it?

Well, that's not really for me to say. However, if they do go, they should go prepared. Drink a couple of Red Bulls before going. Take earplugs. Pack a snack for intermission. You need to keep your strength up. If you can find one, take a periscope. The sight lines can be very troublesome.

I think you can make one pretty easily. Yep. Instructions on YouTube.

You're right. It is an adventure. And like with all adventures, there are always big challenges.

Wouldn't be right if there weren't.