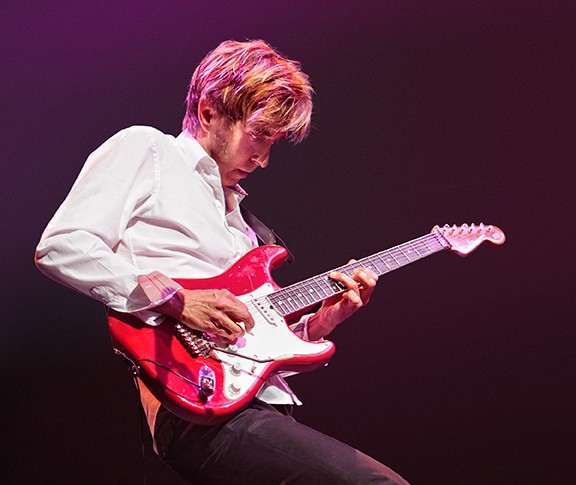 Max Crace
Eric Johnson: “I’m always learning about the harmony of music and how it relates to different instruments.”

Rialto Theatre
8 p.m. Wednesday, Jan. 22
318 E. Congress St.
$28-$34
rialtotheatre.com
2020 is shaping up to be a busy year for Eric Johnson. The acclaimed guitarist is releasing a new album along with a new signature Fender and embarking on a three-month, 55-date tour throughout North America. But according to Johnson, it all just kind of culminated at the same time. What's important for the self-proclaimed "tone searcher" is for the music to sound good as ever.

His new album EJ Vol. II, was set to drop a bit earlier, but wound up being delayed by more than a month. The album will now be released in the middle of his "Classics: Present and Past" tour, which showcases various songs from throughout his career. Multiple songs on the tour are being played live for the first time, featuring a lineup of guitarist and keyboardist Dave Scher, bassist Roscoe Beck and drummer Tom Brechtlein.

"I've played with them before, but it's been a lot of years. It's never been this combination before, so it's a nice new band," Johnson said. "We've rearranged some of the older stuff, so it's not quite like it originally was. And with this new band, they have new interpretations of things, so it's a little bit different."

Each song on EJ Vol. II includes a special theme, sometimes figurative and sometimes literal. For instance, the track "For the Stars" was written surrounding the loss of his mother, while "Waterwheel" was inspired by the flow and synchronicity of the universe.

But even after five decades of playing, a platinum album, multiple signature guitars and being lauded as one of the most respected guitar players ever, Johnson says he's still learning about guitar playing.

"As far as guitar proper, there's always something to learn," Johnson said. "In every single style that I dabble in, there's people I admire who I think are more realized in that style. So there's always a wealth of stuff to learn... I'm always learning about the harmony of music and how it relates to different instruments. I'm always trying to become freer."

Even beyond the electric guitar, Johnson is an accomplished vocalist, bassist and pianist. Listeners are lucky that a performer so prolific and virtuosic makes such optimistic-sounding music; it's one thing to be masterful at an instrument, but it's another to use that skill in such an uplifting way.

An article on Eric Johnson wouldn't be complete without a mention of his legendary guitar composition "Cliffs of Dover," so here it is.

Unlike many other guitar icons, Johnson's technical prowess doesn't get in the way of listenability. While you'd have a hard time finding something he can't do on a six-string, his music remains accessible, engaging and often times quite fun.

Although he comes from a very dexterous and technical school of playing, Johnson says he's a fan of some newer styles of guitar playing, specifically pointing to fellow Austin musicians who play in Explosions in the Sky.

"I think there's a lot of groups that use guitar in a very orchestral way, and it's very different than the older, vintage use of guitar. There's a lot of people doing interesting things. The evolution goes on," Johnson said. "If you box yourself into certain patterns and certain scales and a certain mindset in rock music, and go nuts on it for 40 or 50 years with the same pallette, you can't be surprised if people don't want to listen to it any more, or say, 'That's cool, but it doesn't really turn my head around any more.' It's quite natural that people would get satiated and want to use the instrument in a different way... I think having moments where you play a lot of technical stuff can be appreciated if that pallette and the alphabet you use are fresh."

This ethos shines on his new tour, which will take Johnson and company through the Rialto Theatre on Jan. 22, playing songs old and new.

"I guess the main takeaway is that audiences are having fun and are enjoying experiencing the new music, which I'd say is the main reason to play music," Johnson said.