Ain’t Worth a Damn

Without del Toro, this franchise goes straight to hell 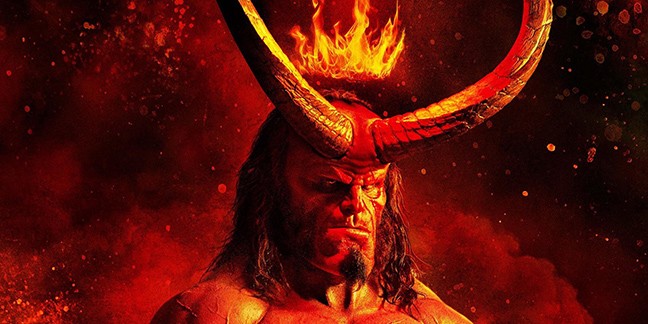 A Hellboy sans del Toro proves to be a very unfortunate thing with Hellboy, the third movie to be based upon the classic Dark Horse comic.

This isn't a sequel, it's a reboot, and a cheap-assed, sloppy reboot at that. David Harbour steps in for Ron Perlman to play the title role, while Neil Marshall (The Descent) haphazardly directs in place of Guillermo del Toro. While Harbour (Stranger Things) is OK in the role, he does little to truly distinguish himself, basically doing some lightweight riffing on a character Perlman established. He's a lot like Perlman, but he's not as good as Perlman.

Gone is the richness and depth of del Toro's world, replaced by choppy CGI, unimpressive makeup and messy editing. The movie is just one lackluster action sequence after another, strung together by slow dialogue scenes that do nothing to make the film feel coherent.

The movie starts off on a goofy note, with Hellboy in a wrestling match with his former partner turned vampire. That sounds stupid, and it is, giving the film a silly note to start on as the narrative jumps from vampire slaying to giant hunting. Hellboy battles giants, who are represented with the aforementioned choppy CGI. Marshall apparently got the go ahead to incorporate a lot of gore, and the movie has a lot of blood, to the point where it has a numbing effect.

The main villain here is Nimue, also known as The Blood Queen and played campily by Milla Jovovich. One of the film's many flashbacks shows Nimue in a showdown with King Arthur, resulting in her getting her arms and legs cut off. As I write this, I realize that King Arthur cutting somebody into bits with his sword is very Monty Python and the Holy Grail, something that didn't dawn on me while I was actually watching the movie. That would probably be because The Holy Grail was classic fun, and Hellboy is a miserable time. Fun comparisons were miles away from my brain.

The film isn't totally void of visual coolness. When Hellboy emerges from his hole with fire crown and horns, wielding Excalibur, you get a sense of what might have been had Marshall found a consistent tone. The movie doesn't know if it's a horror movie, a comedy or a comic fantasy. And it doesn't work as a horror/comedy because it is neither funny nor scary.

One thing this movie offers that, I confess, I've never seen before, is the psychic ghost puker. Actor Ian McShane has endured some embarrassing moments onscreen during his illustrious career, but this movie features a scene where his character's ghost is vomited out of somebody's mouth. He becomes a sort of puke ghost, a grotesque body with a fairly normal head, flowing out of a person's face. McShane is then forced to recite some earnest dialogue, all while appearing as a vomit ghost. It's amazing, in a bad way, that the puke ghosts made it into a movie. Some ideas need to die in the writer's room.

The stated budget for this movie was $50 million, low by today's blockbuster status, and lower than del Toro's Hellboy movies. Del Toro wanted to make a third movie, but he left the project due to creative differences. I'm thinking his exit probably had to do with producers being cheap. While del Toro's works were masterful pieces of art direction, this Hellboy looks like countless other, cheaply shot dark fantasies before it.

The final scene of the film seems to be setting the table for a sequel, a sequel that won't be happening for a long time, if ever. del Toro was ready and willing to put together the third and final chapter in his Hellboy trilogy. Instead we get this, a shlocky restart to a franchise that, most assuredly, will stall again.