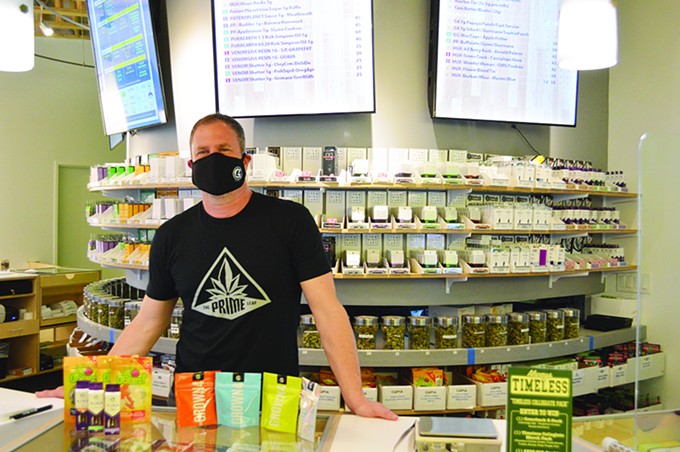 The people behind Tucson's Prime Leaf dispensary believe it's time to change the way people think about cannabis.

"When we say we want to change the world, we fucking mean it," said Brian Warde, co-owner and CEO of Prime Leaf. "We have our brand, but we really want to educate."

The dispensary, which has been open at 4220 E. Speedway since 2017, recently opened its second location on Park Avenue near the University of Arizona campus.

Education and community service is at the heart of the business. Warde has been focused on building community relationships and destigmatizing marijuana.

"We're a company built on trust and founded on community relationships," Warde said. "We were slow to start, but we've built a lot of relationships by being honest and trustworthy."

The Prime Leaf vision aligns with first impressions, as the new location is designed with the customer in mind. Open, airy and inviting, the dispensary has the vibe of a chic clinic with plenty of space for patients and a waiting area where family members can feel comfortable.

In the interest of public health during the pandemic, plexiglass shields have been installed and all patients and staff members are required to wear masks and maintain social distancing. Additionally, staff members clean and disinfect the facility every three hours to ensure a safer environment.

The store carries the company's Grown4 harvested at Rita Ranch as well as the usual concentrates, cartridges and lotions. The edible selection includes Prime Leaf's house brand, OGeez gummies, and a wide range of suppliers, including Sublime, Aunt Ellie's, Baked Bros and Huxton.

Beyond the sales counter, Warde and his partners—all longtime Tucson residents or Tucson natives—have a deeper mission to encourage a cultural shift surrounding cannabis and change the Reefer Madness perception of the plant as "the Devil's lettuce."

Warde first became involved in the business in 2014 and started reaching out to unlikely partners, such as the Tucson Symphony Orchestra.

"We work with the symphony because we found a lot of our customers, particularly the elderly and veterans, care about it," Warde said. "They were nervous at first and we received a few tickets for patients and they'd only let us put a small poster up in our shop that first year."

But everyone involved received such positive feedback from the program that within three years, it expanded as Prime Leaf became a trusted corporate partner to the Symphony.

Prime Leaf is also a big supporter of other nonprofits, including the Therapeutic Ranch for Animals and Kids , the Crohns and Colitis Foundation and several other music and festival nonprofits. Warde is also president of the board of directors for the Tucson Heirloom Farmers Markets.

Warde has spent his career as an advocate for underserved communities and people. Before he entered the cannabis industry, he worked for the Department of Justice as a victim's advocate for southern Arizona Native American tribes and worked with the federal government to prosecute perpetrators of sexual assault. He has also worked with people dealing with opiate addiction, which has led to his mission to advance the conversation about cannabis.

"I see customers in their 50s and 60s trying to kick opiates," he said. "There was a time where I didn't believe in it, but I've seen people spend three to four times [on medical marijuana] what they'd spend on opiates at CVS to avoid using them."

So opening the new dispensary gives Prime Leaf the opportunity to expand the reach of its message and continue the trajectory of the mission to get the word out about the positive aspects of cannabis.

"Part of our mission is to get out and touch people. We're normalizing cannabis and changing minds," Warde said. "Working with vets is a big motivation."

The road has been tough for Prime Leaf, given the fallout from COVID-19 and dealing with zoning issues that delayed the opening of Prime Leaf 2 for more than a year.

But Warde wants to put all that behind him and move forward in an industry that has essentially thrived during the pandemic.

"We work from a place of good intentions and have bigger things to deal with than petty squabbles," Warde said. "Our business model is employee and community-driven."

To celebrate the grand opening, Prime Leaf on Park Avenue will have daily, grand opening BOGO specials from Sept. 14 through Oct. 11.

The new Prime Leaf dispensary is located at 1525 N. Park Ave. Hours are Monday, Wednesday, Thursday, Friday and Saturday from 9 a.m. to 6 p.m. and Sunday from 10 a.m. to 6 p.m. They are closed on Tuesday.

For information about specials or to order in advance, call the Prime Leaf at 520-447-7463, or go to theprimeleaf.com.