Mezcal is a big part of Tucson’s cultural patrimony

While the Agave Heritage Festival contains more events than we can fit here, this is a list of some of our favorite local happenings that celebrate the borderlands’ flora:

The Art & Sciences of Agave

A three-hour class hosted by the University of Arizona about the landscape of the Sonoran Desert through the eyes of the “Agave-Human symbiosis.”
9 a.m. to noon. Saturday, April 27
Tumamoc Hill $80

This field trip shows how “the desert landscape can be harnessed to create abundance.”
9 a.m. to noon. Sunday, April 28
Tumamoc Hill $30

Bacanora: Spirit of the Sonoran Desert

This documentary shows how agave influenced the history and cuisine of entire cultures.
7 to 9 p.m. Tuesday, April 30.
The Loft Cinema. 3233 East Speedway. Free.

Agave: Spirit of the World

Drive through any Tucson neighborhood, and you'll quickly see that the sword-shaped leaves of century plants are among the most common greenery to adorn the front yards of homes and businesses in the Old Pueblo. Their lovely, fragrant blossoms perched high on enormous flower stalks attract bees, hummingbirds and occasional bats all through the spring and summer.

And yet, the plants themselves often look rather stiff, as if they are uncomfortable being relegated to the status of a stately ornamental in so many places where residents have forgotten their many uses.

That may be because agaves have been much more than just another pretty face over their centuries of being in symbiotic relationships with other desert dwellers, us humans included. They have offered our predecessors in the Tucson Basin food and fiber, medicine and construction materials, symbolic imagery and religious ritual, as well as fermented and distilled beverages over the centuries.

Although agaves may not get much respect in other Sunbelt cities, here in Tucson, they have nearly been granted "personhood," for century plants are respected elders who deserve our veneration.

That may be why Tucson is on the verge of celebrating its 11th annual Agave Heritage Festival, with more than 25 events occurring around Tucson from April 23 to May 5. Anchored at Hotel Congress, the festival now includes special appearances by agaves or their distilled spirits at Mission Gardens, the Mexican Consulate, the Fox Theatre, Tumamoc Hill, the Arizona-Sonora Desert Museum, EXO Bar, Loft Cinema, Janos Downtown and Tohono Chul Park.

"I can barely believe that this festival started 11 years ago as a margarita championship," says Dalice Shepard, the marketing director for Hotel Congress. "The evolution to a nationally recognized event that showcases our region in a true and authentic way is magical. I am in awe of the draw that this festival has for experts in all fields."

Given how enamored contemporary Tucsonans are with all things agave, is this just a temporary fling, or a long-term relationship? If we take a step or two back into Tucson's history, it is easy to see that the marriage between desert dwellers and agaves has survived centuries, if not millennia.

Go into any cave in the desert borderlands where archaeologists have documented a prehistoric occupation and you are likely to find dried-up masses of agave fibers called "quids." If the archaeologists guiding you knows their stuff, the quids can be determined to have been used as food, as fiber for weaving belts, bags or baskets, or as absorbent pads used as bandages or for feminine hygiene. Archaeobotanists Vaughn Bryant and Kristen Sobolik have suggested that some quids found in caves above the Rio Grande indicate human uses of agaves in the borderlands dating back 8,000 years. 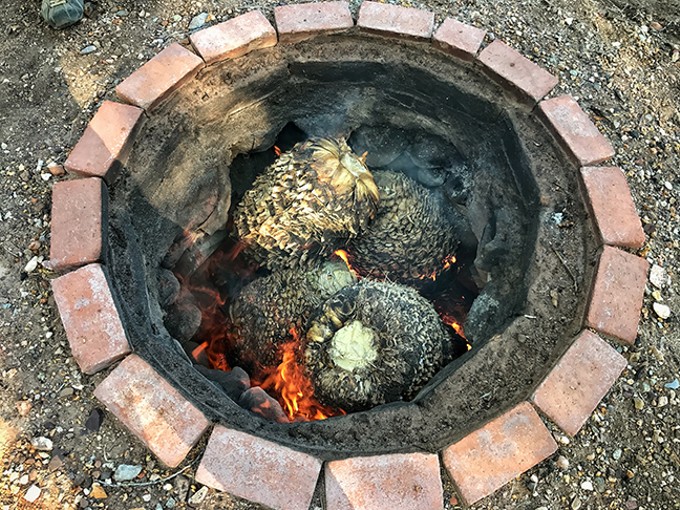 Bill Steen
Agaves are roasted as part of the distilling process

In the Tucson basin, archaeologists Suzanne and Paul Fish have documented not only the use but also the cultivation of agaves by the Desert Hohokam that lasted for centuries. They have meticulously mapped thousands of acres of prehistoric agave fields between the slopes of the Tortolitas and the Tucson Mountains. Using the presence of terraces, rock piles, roasting pits and agave knives, they have determined that the Tucson Basin was one of the most extensive areas of agave cultivation north of the present-day border with Mexico.

Paleobotanist Jeff Leach estimates that perhaps as many as 100,000 agaves were cultivated in Southern Arizona at the peak of production, with as many as 10,000 harvested annually by Hohokam. 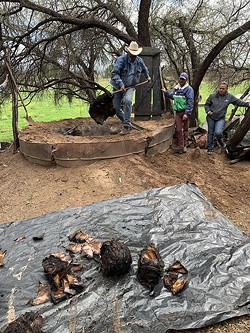 Bill Steen
Agaves are roasted as part of the distilling process

It seems that century plants were a cultural keystone species for desert dwellers, just as bison were to the nomads of the Great Plains, or salmon were to fisherfolk in the Pacific Northwest.

Just why agave cultivation was abandoned in the Tucson Basin remains subject to speculation, but the roasting and fermentation of wild agaves did not cease with the abandonment of Hohokam villages. Fast forward to the late 19th century, and we can see that agaves were much in demand as distilled spirits in the Old Pueblo.

Fortunately, the Arizona Historical Society has preserved some business ledgers from 1896 to 1903 that document Tucsonan's voracious thirst for tequila and mescal. Long before most Yankees and Yoris had heard of mezcal and tequila, Old Pueblo pioneer Julius Goldbaum was buying barrel loads of agave spirits from Mexico, and bottling them for Tucson consumers.

Goldbaum imported mezcal de Tequila from the town with the same name in Jalisco, and imported mezcal de Bacanora and lechuguilla from the town of Suaqui Grande in central Sonora. Neverless, Goldbaum—a city slicker born in Europe who had lived on the East Coast before settling in Tucson—suddenly bought some wildlands between Nogales and Patagonia at the height of his mercantile business on Congress and Meyer.

The land which Goldbaum bought was in close proximity to large populations of lechuguilla (Agave palmeri) and the Huachuca mezcal (Agave parryi var. huachucensis) that were suitable for the purposes of distillation. Could it be that he grubstaked some Sonoran-born jimadores who both harvested mature agaves from his land and distilled them into spirits before bringing them up to Barrio Viejo for bottling and labeling by Goldbaum?

Goldbaum had checked out of Tucson to retire in California before Prohibition was enacted, but others skilled in the fine art of bootlegging took up the slack. In the late 1970s, I stumbled on an abandoned, rusted-out still hidden in a canyon in the midst of a large wild agave population near where the proposed Rosemont mine is being planned. I thought it was a "one-off" solitary operation, until I learned from Chuck Bowden about the many bootleggers who distilled spirits on the northern slopes of the Catalinas during the Great Depression.

One of those bootleggers was the legendary Buster Bailey, who Bowden interviewed for his book Frog Mountain Blues. Buster was born and raised around Van Horn in the Big Bend of Texas, where transplants from Tennessee made corn mash, and Mexicans made sotol and mezcal.

By the time Prohibition and the Great Depression had created a perfect storm, Buster had relocated to the Tucson basin and set up a still for corn likker on the back slopes of the Catalinas. But Buster was not alone—others of both Mexican-American and Anglo-American descent had also established distilling operations in the hills and hollows above Tucson. It is likely that mezcal as well as whiskey came into Tucson on the same wagons, where they were sold in grocery stores and bars within a few blocks of the police station and the mayor's office. No doubt, the politicians and peacemakers knew what pleased the populace, and so they looked the other way.

Although Buster and his neighbors abandoned bootlegging when World War II broke out, many Tucsonans still had cousins south of the border who regularly bottles of bacanora and lechuguilla to their Americanized kin. One of the first times I bought bootleg mezcal in Sonora was in 1975, at a grocery run by the Colosio family in Cucurpe, a farmtown not far from Bacanora. As I was purchasing mezcal lechugilla in a caguama-sized bottle from Mr. Colosio, he asked me where I was from.

Bill Steen
Recent catastrophic freezes have killed more than 60 percent of the wild agaves mature enough to be used in mezcal production.

"Near Tucson," I answered, assuming that he would not know where Elgin, Arizona, was, for I was living on the Appleton Research Ranch at the time.

"Well," he told me, "you just missed seeing Los Ronstadts—Federico y Gilberto—who also buy a bottle to take home after singing corridos for a few days with my kinfolk."

Bacanora, it seems, has become a sort of cultural currency between Sonorans and Arizonans. One time when I was visiting Sonoran Gov. Samuel Ocaña in his office, he pulled out a gallon bottle of bootlegged bacanora from his hometown in the zona serrana and gifted it to me at 9 in the morning!

"It's how we welcome our friends from other lands to the unique taste of Sonora," he said matter of factly, as if the ritual offering had been repeated a thousand times over the years.


During this year's agave Festival, several events will feature Sonora's finest mezcals and their artisanal producers. And yet, just as international interest in bacanora begun to boom a decade ago, two catastrophic freezes killed more than 60 percent of all the wild agaves that were mature enough to have been used in the coming years. 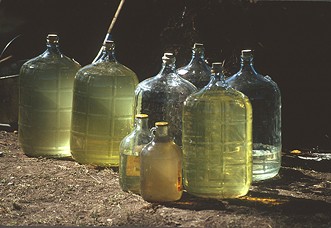 "The most urgent issue is to ensure this plant, spirit, culture and heritage does not get swallowed up in the commercial greed of our society," Hannley says. "We must maintain a delicate balance between economic growth and environmental stewardship."

Arizona's most deeply studied mezcal aficionado, Bill Steen, has framed the dilemma in the following manner: "We are at a crossroads where the Arizona public is discovering that some of the finest mezcals in all of Mexico has been right here, in our backyard, all along. Lechuguilla and bacanora have been produced for centuries [within a hundred miles of Tucson]. And yet, there are not now enough plants to support a sufficient level of production to meet the current and future demand. The increased popularity creates a very delicate situation." 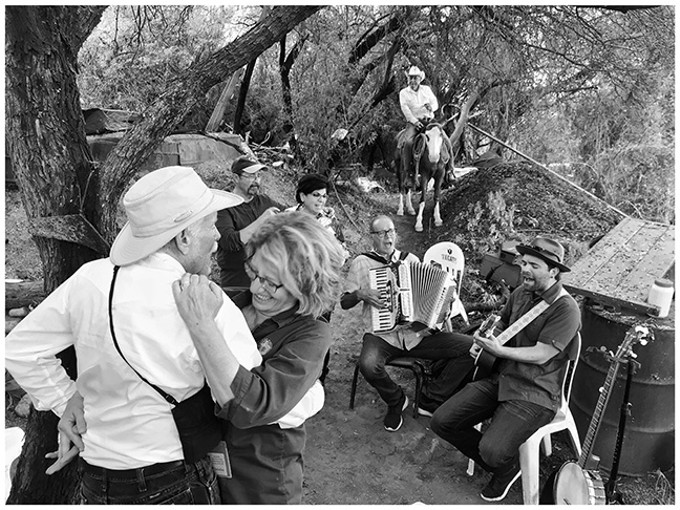 That delicate situation not only affects producers and consumers of wild-harvested mezcal, but nectar-feeding bats as well. Nearly 30 years ago, former Tucsonan Donna Howell sounded the alarm that the excessive harvesting of wild agaves—particularly when they are harvested before they produce vegetative offshoots— could negatively affect their pollinators, two species of nectar-feeding bats. Her PBS film The Bat, The Blossom and the Agave triggered three decades of fieldwork and debate over whether mezcal consumption inadvertently diminishes the health of both century plants and the bats which depend upon them for nectar while migrating through Sonora.

But this year's Agave Heritage Festival brings good news. Renowned as the Bat Man of Mexico, Dr. Rodrigo Medellin and his colleague David Suro will speak of the Tequila Interchange Project, which is working with producers on bat-friendly protocols for sourcing their raw materials. In addition, horticulturist Francesca Claverie will report on here propagation and transplanting of thousands of wild agaves on both sides on the border through a collaboration between the Borderlands Restoration Network and Colectivo Sonora Silvestre that is guided by bat conservationists.

The bottom line is for consumers to seek out the bat-friendly mezcals and tequilas, while supporting those non-profits that are tangibly working to restore agave and bat populations in Sonora and elsewhere.

To drink mezcal with no regrets, consider ways you can help the wild lives that underpin the symbioses between humans, bats and agaves that are part of our oldest borderland traditions. Let's make the new Santa Cruz Valley National Heritage Area the first of the 55 Heritage Areas to declare itself a sanctuary for both bats and agaves.

I'll drink to that!