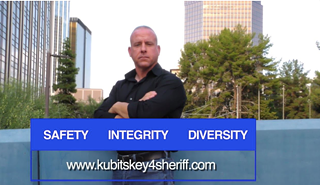 Makyla Cleary wrote a Facebook post on Sunday, July 19, explaining that Kubitskey "physically, sexually and mentally" abused her between the ages of 6 to 12 until she gained the courage to speak up about the abuse.

She and her mother had an order of protection placed against Kubitskey. Makyla said they were in the process of gathering people to testify on her behalf, but Kubitskey gave up his parental rights "so that he would not face the backlash of the truth coming to the public."

"Kevin is a man who has severe anger issues and uses the badge as a shield of protection," Makyla wrote. "I'm asking that everyone please take the time to go vote against him as it is not safe to have an abuser and predator as our sheriff."

Court records show that Kubitskey and Makyla's mother, Brianna Cleary, dissolved their marriage in 2007 and a back-and-forth custody battle began the following year. In December 2013, they came to an agreement that Kubistkey would have no contact with Makyla unless she initiated it.

Kubitskey, a Democrat, denied the allegations on Facebook and said his daughter was manipulated into posting about their family history by his political opponent, Democratic sheriff candidate Chris Nanos. Voters will decide which candidate advances to the general election on the Aug. 4 primary. Nanos was a longtime Sheriff's Department officer who was appointed to the seat in 2015 but lost his bid to win it at the ballot box, losing to Republican Mark Napier in 2016. Napier is seeking reelection this year.

"My estranged daughter has mental health issues that my opponent Chris Nanos is now exploiting and trying to use to his political advantage," Kubistey wrote. "Rather than succeeding in debates and engaging with the public, Nanos is bringing this election into the gutter, with politics that exploit private family matters."

Makyla responded to these claims on Facebook, saying Nanos has not exploited her in any way. She said Kubitskey is the source of the mental health issues that he mentioned, and added that therapists have diagnosed her with severe depression, PTSD and social anxiety stemming from the abuse she endured.

In a statement, the Pima County Democratic Party Executive Committee said it was withdrawing its support based on Kubitsky's response.

"Our decision to withdraw support is based on the manner by which his campaign responded to those allegations," the committee wrote in a prepared statement. "His response included the unauthorized disclosure of sensitive medical information about a family member and an accusation that a political opponent orchestrated the release of the allegations. Running as a Democrat is a privilege, and we hold all our candidates to the highest ethical standards."

The statement continued: "We condemn any candidate who exploits this decision, or the allegations that gave rise to it, for political gain. We support work to ensure women's physical, economic and personal safety."