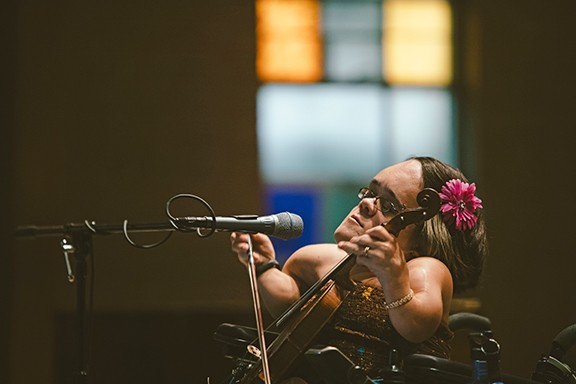 Courtesy photo
Gaelynn Lea: “I decided that anything I did for a living I wanted to involve music.”

Minnesota's Gaelynn Lea is a phenomenally talented violinist, songwriter and singer. She's a passionate and poetic, razor-sharp lyricist and a captivating performer. She also happens to have been born with a genetic condition called Osteogenesis Imperfecta, which causes complications in the development of bones and limbs. But Lea is as determined as she is talented; once she decided that she wanted to play the violin, nothing was going to stop her.

"I started playing violin when I was 10 years old," Lea says. "I liked it and wanted to try it, and I had a cool teacher who helped me adapt the way I play. I play it like a cello. My teacher and I were working together. I tried the actual cello, and it was just too big. The violin was too big to have on my shoulder. It was good to have an actual teacher helping me because she knew about the other instruments too. I hold my bow the way an upright bass player does, and I wouldn't have known how to do that. She helped me fine-tune my method once we figured it out."

It's amazing, not least because Lea's disability doesn't define her. As far as the public is concerned, she's a magnificent musician first. Not only has she proven that there are no limits to what she can achieve, she's proving an inspiration to other people too.

"When I won Tiny Desk [2016 NPR songwriting contest], some guy from the Netherlands emailed me and said that he is a classical violinist, and he has my disability, and he plays up and down as well," Lea says. "I've never gotten to see him play, but I'm curious to meet him and see how he holds his bow and all that stuff too."

Having figured out how to hold the violin and then how to play it (not easy for anyone), Lea played for her own pleasure through college, in a folk duo and a variety of bands. She started to get a little more serious about her music in 2011 when she met Alan Sparhawk of the Minnesota band Low, and the pair started collaborating on a project called Murder of Crows.

"We started playing more often, and I started writing more music," Lea says. "In 2013, I decided that anything I did for a living I wanted to involve music, so I started teaching fiddle lessons and still performing regionally. When I won Tiny Desk, all these requests came in for us to travel, and I realized that we could make a go of it."

As we settle into 2018, Lea describes her style today as an ambient and textured take on indie. There are clearly classical and folk influences and, thanks in part to her use of a looping pedal, the whole thing is gorgeous and lush. That sound will inform her third solo album, which she's putting the finishing touches to right now (fourth album if you include Imperfecta, the one Murder of Crows record).

"We've just finished the editing, and this one's going to be very different because it's a full-band album," Lea says. "There are only two fiddle tunes—the rest of it's all singing. That's coming out in September of this year."

Lea told us that there's a song on the new album (she didn't reveal the name yet) about the disability-rights movement that she's very excited about. The lyrics were inspired by the ongoing, and seemingly never-ending, healthcare debate. It's all very frustrating, but Lea feels fortunate that she has her art as an outlet, especially while we're living under the current administration.

"It's frustrating that we're going backwards instead of forwards, but it's important for people to speak up, especially in the disability community," Lea says. "You can't compare—there's no minority where everything's great. But I felt like we were finally starting to gain some headway. There are so many barriers—people of a different minority who are able-bodied can at least get into a building. We're still at the point where there's not even physical access to a lot of places. The dialog is really negative. So I definitely think it's important to speak up and also work together and not think that your issue is the only one that matters. What art can do, if it's done in a way that's authentic, is it can either help express people's frustrations, or it can help keep us positive in a time that's really hard."

Away from music, Lea found another way to make a difference when she became a disability advocate. In fact, prior to her career in music kicking off, she had planned on becoming a lawyer.

"It's been neat to get to meet other people from the disability community who are in music or say now they want to try," she says. "I had a lady who has muscular dystrophy, and said she used to play, but it's hard to push on the strings. Seeing me play helped her think of other creative ways that she could take it up again. I just love when little kids are inspired to learn, because that's happened a few times."

On Wednesday, Lea performs at Club Congress, marking a return to the venue where she enjoyed success a year ago.

"It was a super fun venue, and the people were really nice," she says. "I had no idea what to expect from Arizona, because I also played in Phoenix. It was a really welcoming music community in both cities, and I'm looking forward to coming back."

She'll be performing a solo set, though she wants to return soon with a full band. Still, she'll be playing songs from the new album and, because she's been on the road a lot of late, she believes that she'll be perfectly warmed up for Tucson.

"I've just been performing a ton, so hopefully people will notice a difference," Lea says.

We have no concerns that this will anything other than breathtaking.