Danehy: Gov. Ducey is lifting restrictions just as Arizona was getting a handle on COVID and his decision will prolong this misery 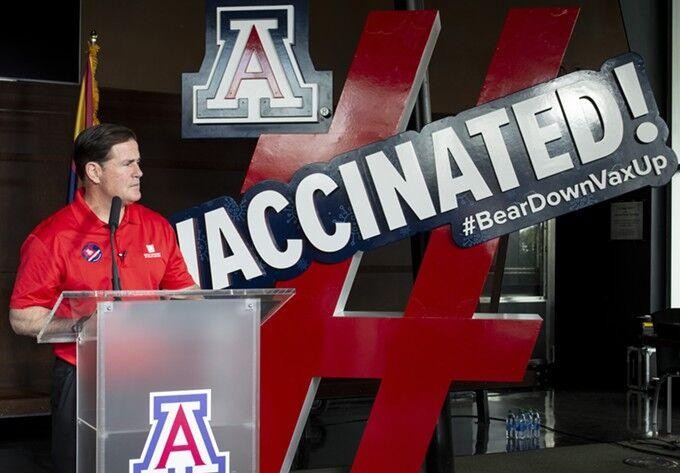 News on the COVID front:

In the classic Talking Heads song, "Girlfriend Is Better," David Byrne sings "...get closer to be far away..." That's what's happening now in Arizona as people are dropping their guard, gathering in unsafe numbers, and taking off their masks just because Dumbass Doug Ducey caved to political pressure and prematurely lifted COVID restrictions in the state. It's ridiculous. With the vaccination programs going full speed, we were probably within a couple months of shutting the pandemic down. Now, we're almost certainly going to have another surge.

As knuckleheads get (unsafely) closer to one another (and us), the time that we can put the pandemic behind us gets further away.

I went to the grocery store up on Tangerine the other day (after Gov. Dumbass decided that he could be just as ignorant as a guy from Mississippi). I was pleasantly surprised. The store still has the mask order prominently displayed on the door and everybody in the store was wearing a mask—young, old, teenagers, little kids.

Everybody except one woman. I turned down one aisle and there she was, coming toward me, struttin' like a pimp on payday. I turned my cart around and avoided her because you could tell she had the Stank of Stupidity on her. I finished shopping and got in the checkout line. Sure enough, she gets in the line next to mine. I glanced over at her and I'm sure I scowled behind my mask.

She looked at me and said, "You're just looking at me because I'm not wearing a mask."

Eight-five things went through my head, but I settled for "Lady, that's pretty much the only reason anybody would look at you."

These next couple months are going to be brutal, what with more and more people "exercising their personal liberty" and prolonging this nightmare by several more months.

The Q-Anon folks, fresh off their stunningly successful effort to keep Donald Trump in office (oh wait!), have moved on and are now focused on trying to undermine mass vaccination efforts. They figure if they can just find a way to keep the pandemic from dying out, it will make the Biden Administration look bad.

Q-Anon people are joining forces with anti-vaxxers and other dim bulbs to spread misinformation about the vaccines. These false stories include claims that Bill Gates (that evil guy who basically wiped out polio in Africa out of his own pocket) has really tiny computer chips in the vaccine that will take over a person's brain. But, even if that were true (IT ISN'T!!!), it would be like that Gospel parable in Matthew 13: 1-23 about the guy who sows some of his seeds on barren, rocky ground and thus fails to produce a crop.

I saw one woman with a sign that read "mRNA (the stuff that makes the Moderna and Pfizer vaccines work) = GM Humans." I would have given that woman a thousand dollars if she had been able to accurately explain any part of that placard.

I haven't always been her biggest fan, but kudos to Tucson Mayor Regina Romero for sticking to her guns in trying to keep her citizens safe and well by keeping the mask mandate in place.

We've all read the poll results about the shockingly high number of people who voted for Donald Trump who say that they won't get the vaccine. While I know that it doesn't exactly work that way, wouldn't it be wonderful if everybody who wants the vaccine could get their shot(s) and then the only people who could get sick and maybe die from COVID would be those people who turned down the vaccine?

Shame on Channel 13 News and its sister station in Phoenix for running a story about a "mask-burning protest rally" in Phoenix. Do TV stations no longer have qualified news editors who assign reporters to real stories?

The piece started with a shot of a couple masks being thrown into a fire in a metal trash barrel. But when the camera panned back, there were a total of FIVE PEOPLE wearing Trump T-shirts, cheering as they threw masks in the trashcan. That's not a protest rally. It's dinner time with the Clampetts out by the see-ment pond. The only thing newsworthy about that was that at least one of them knew how to start a fire.

This spring, I'm coaching girls' tennis. Please hold the laughter. I actually played a season of tennis in college. This, of course, was before Doritos were genetically modified to become super (waist) spreaders. My college coach said (and I quote): "For a self-proclaimed football player who is in college on a basketball scholarship, you're not horrible at tennis." I'm still blushing.

Anyway, what's really cool is that while the Arizona Interscholastic Association has said that student-athletes don't have to wear masks while playing, my players still wear their masks on the court. I asked one of them why and she (obviously well-versed in chaos theory) said, "If I wear my mask a little bit longer, maybe one fewer person will die."

And yes, she used the correct "fewer" instead of "less." The future is bright if we can just hang on a little bit longer.