A Woman’s Place is in the Gallery 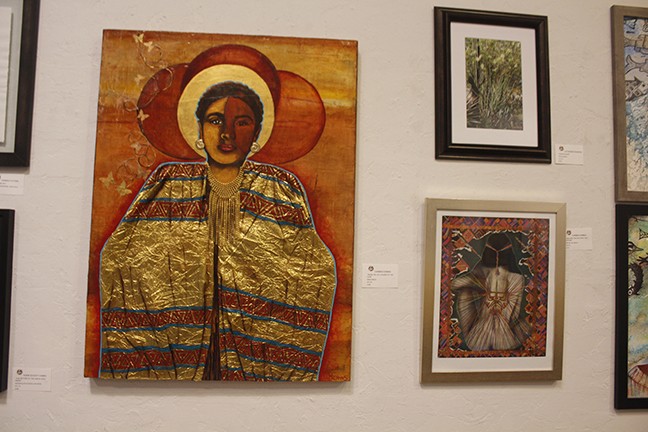 Raices Taller 222 Art Gallery & Workshop
218 E. Sixth St.
881-5335
1 to 5 p.m. on Friday and Saturday, or by appointment.
The exhibit will have a closing reception from 6 to 9 p.m. on Saturday, June 8, with musicians, artists and writers—including the Tucson Weekly’s own Margaret Regan doing a reading.

The walls of the Raices Taller 222 Art Gallery & Workshop are covered in art that's colorful, personal, silly, serious, textured, symbolic and beautiful. It spills off the walls in the form of sculptures and metal work. There's a painting of a donut, some fiber work of grocery carts sitting in a parking lot and a photo of a woman waiting for the microwave to go off. Notably absent? The political.

Sure, there are a few pieces that touch on situations like Trump's proposed border wall or environmentalism. But Ceci Garcia, one of the gallery's founding members, says this is the first time in the show's 15-year history that politics haven't been at the forefront, or a major theme of the show.

"Between the Trump ire and the 'Me Too' stuff and the women's stuff, I feel like this show reflects that women—somehow, on some level—are having each other's backs in a different way," says Carolyn King, a local artist with two pieces in the show. She recalls one of the rallying phrases of second-wave feminism: The personal is the political. "I feel like this show is much more personal... Visual art can be very didactic, or visual art can be symbolic and quiet and personal and still affect you."

And affective the pieces in the gallery's 15th annual Mujeres Mujeres Mujeres exhibit are. More than 80 artists from across the United States and from several other countries are exhibiting more than 90 pieces of art. Some are well-established artists. Some have never exhibited before.

"There may be a student's work hanging right next to an internationally recognized artist," Garcia says. "We may have a young artist's work hanging next to a piece by someone in their nineties."

"Guardians of the Oceans" and "Visioning" are both of solemn-looking women against colorful backgrounds, beneath black and white fish covered in symbols. She got her inspiration for the pieces from her job as an elementary school art teacher, where she led an ocean-themed art unit to go along with what her students were learning about in science class. That got her thinking about what a life force water is, and how it's connected to the feminine spirit. Women, she says, carry the water of life in their wombs.

"I think of the oceans as a place of feeling and emotion," she said. "And visual art, above all, is a healing tool. It is a language for all of us to acknowledge how connected we are, especially in these particular topics. Ecology is so critical right now."

The fish in the paintings are inspired by Greek and Japanese imagery, as a nod to the connection ancient people and civilizations had to the oceans and fish. It can be difficult here in dry, landlocked Tucson, she says, to visualize the importance of our oceans, and of keeping them clean, which is part of why King believes art and symbolism are so important.

"You see the mixture of women's art in the symbols," Ceci says. "There are symbols within symbols, and there's color that is personal, and they choose to narrate through these symbols and these colors and this vibrancy."

"Soul Merger" and "Her Radiant Heart," are showing alongside "Icelandic Poppies," a piece her mother, Hughette Nordin, painted before she passed away in September 2018. At last year's Mujeres Mujeres Mujeres show, Davis, her aunt and her mother all exhibited together. She says the lack of darkly political themes isn't unusual for her mother.

At the gallery's Chubasco exhibit last year, the two women worked together on a diptych of a monsoon, with a rainbow dividing a section of stormy, dark clouds and a section of white, fluffy clouds. Nordin said the darkness and light were meant to represent that, even in the midst of a cancer diagnosis, life comes with both good days and bad.

"Her art always steered more to the beauty of life," Davis says. "Even through everything that was going on, she was always optimistic and always saw the beauty in everything. She always loved the symbolism of the desert flora, because, as with women, there are sometimes harsh conditions."

When she died, Nordin left all of her paintbrushes and canvases to Davis, who hopes they'll strike inspiration. While her mother was an oil painter, Davis is more practiced in pencil sketching. Recently, she's felt a draw to start using more color in her work, and she says it feels appropriate, like she's picking up her mother's mantle.

"Her Radiant Heart" is a mixed media photograph, with a heart that seems to fall somewhere between the shape of a biological and a valentine heart, in a blue that's so bright it's almost overwhelming. The title is fitting in more ways than one. Nordin donated her body to science after her death, and Davis assumed scientists would use it to research pancreatic cancer, which is poorly understood. She got a letter in the mail that explained that her mother's strong, healthy heart was what the researchers had chosen to use.

"It was just amazing," Davis says. "She was still giving, even when she was gone."