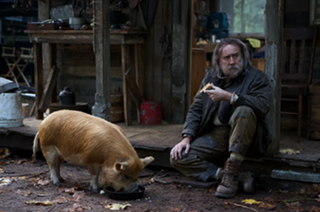 Have you seen the trailer for Pig, the new Nicolas Cage movie that's seemingly about a hermit (Cage) seeking bloody revenge for the kidnapping of his beloved truffle pig? If you are thinking it's just a John Wick rehash with a mushroom-sniffing swine replacing a precocious beagle, you wouldn't be alone. The trailer is a bit deceptive.

The film is actually a real slow burner about a dude—and some other dude—dealing with loss and death and trying to appreciate fine cuisine at the same time. Is it weird? Hell yeah, it is. Is it ultraviolent? No, not really. Does Nicolas Cage's character get revenge? That depends upon your definition of revenge.

Cage plays Rob, a mysterious, grubby truffle farmer living somewhere in the woods near Portland, Oregon. He eschews showers in favor of brooding, and his time with his cute little brown furry truffle pig is his only source of moderate joy. Amir (Alex Wolff of Hereditary), a Camaro-driving truffle dealer, shows up once a week to buy truffles from him and make a few wisecracks about how weird Rob is. Rob takes it all in stride and sort of drifts through life.

The beloved pet is violently kidnapped amidst loud squealing and a blunt force blow to Rob's head. When he awakes, his pig—and only true family—is gone. In his quiet, restrained, and still caked in blood on his head ways, he recruits Amir to help him search for his little piggy.

The search doesn't involve shotguns, handguns, zip guns, ray guns, bicep guns or caulk guns. It consists of a bunch of conversations, some animated and some not, until the kidnapper is located and dealt with. There is one odd, semi-violent Fight Club type scene along the way that really doesn't belong in the movie. Rob's usual investigative tactics are the ultimate in restraint and vulnerability. He's not an outwardly violent guy, and his character's true origins are slowly revealed.

While Cage does get a couple of opportunities to shout, the script mostly calls for him to barely mumble. Like he did in the amazing Mandy, his character is searching for something he has lost, but he doesn't chug vodka and wear a cool tiger shirt. This might be the most restrained Cage performance on record, more in line with his work in Joe than, say, Color out of Space.

For me, it's refreshing to see Cage get slow, somber and moody as opposed to screaming his head off and disemboweling people. Granted, I sort of love it when he screams his head off and disembowels people, but seeing him switch gears and access different facets of his talent is one of the joys of watching this guy over the years. He's made his share of stinkers, but he's always going for something different in the way he approaches material.

It's become natural to expect Cage to go gonzo with his acting. He actually doesn't take the "Gonzo" award in Pig. That distinction goes to David Knell as a pompous chef who shares the film's best scene with Cage. Knell is one of those recognizable actors you might not know by name, but he's been around (Total Recall, Alf, the guy who said, "We're not twins!" in Splash). He unravels before our eyes in a scene that is both unnerving and hilarious, while Cage remains even keeled. Their conversation about restaurants is clearly meant as a parallel for Cage's acting career, and it's the best writing in the movie. Wolff (who apparently counts Cage as his favorite actor) is fun as his wingman, while Adam Arkin has a couple of powerful scenes as Amir's stoic father.

The material here is good, but it is spare and mostly soft, even sweet, in its presentation. This is the very definition of art film. It's deliberately paced, it has a stirring, evocative soundtrack, and it has lots of talk about fine wine and truffles.

This film is not for everyone. It's not even going to rank as a cult fave.

For Cage fans, Pig will fall somewhere in the middle of the pack. It's not on par with Raising Arizona, Mandy or Leaving Las Vegas, but it's a shit ton better than Ghost Rider and Captain Corelli's Mandolin.

This one ranks with his performances in films like Birdy, Joe and the mellower moments of Matchstick Men. Fans will appreciate it. Non-fans might find themselves wishing Rob would stop talking, whip out a machete, and exact some Mandy/John Wick-like revenge on his pig's kidnappers.