Men in Black travels the world without actually going anywhere 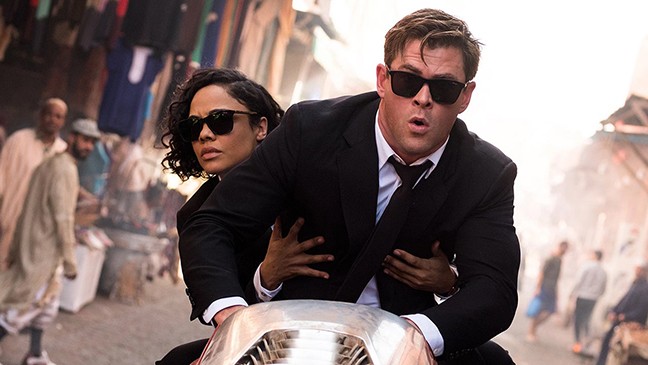 Men in Black: International, the fourth film in the MIB franchise, is the second-worst MIB film after Men in Black II. The original, and Men in Black 3, were the only good ones. International amounts to a wasted opportunity, an admirable attempt to restart things with a mostly new cast that doesn't quite hit all its marks.

Replacing Will Smith and Tommy Lee Jones (along with Josh Brolin as the young Tommy Lee Jones) are Chris Hemsworth and Tessa Thompson, as agents H and M. H is the bold, brash, superhot dude of MIB, having saved the world years ago with Agent High T (Liam Neeson) of the London MIB branch, from an evil alien force called the Hive.

M is the latest recruit, having found MIB's secret headquarters after years of searching. As a child, M witnessed an alien encounter (and saw her parents getting their minds erased), starting a curiosity fire that doesn't get put out until Agent O (Emma Thompson) gives her a chance to basically save the world as a probationary agent.

Tessa Thompson is great in anything she does, and she is great here. She brings a fun energy to the role, with a slight edge of wiseass. Hemsworth is a performer who seems to like himself a little too much, but still manages to be likeable. The two make for a good pair, as they did in Thor: Ragnarok. While it is fun to see them standing next to each other again onscreen, it's a little baffling what the screenplay puts them through.

Matt Holloway and Art Marcum, two of the many writers on the original Iron Man, take a hack at bringing the duo on a global adventure. The globetrotting, which include Paris, Italy and Marrakesh, lacks a true sense of purpose, a surprising thing being that they are trying to save the world.

After a fairly strong start, the action, presented by director F. Gary Gray (Straight Outta Compton), devolves into sloppy boredom. With each passing location it seems as if the movie is directionless, merely picking new locales and switching up the scenery to disguise the fact that it is actually going nowhere.

A "mole in MIB" subplot mystery doesn't help matters much, with the mystery of who the villain is being ultra-guessable. A finale in Paris (after an opening in Paris) offers few surprises, and no thrills. The movie ends with a big old "Huh?"

The effects are pretty good, with a few new aliens, most notably a little one named Pawny (voice of Kumail Nanjiani), adding sporadic fun. I also got a kick out of a mini alien posing as a beard on some dude's face.

This project was originally supposed to be a crossover with the Jonah Hill 21 Jump Street franchise. I'm guessing Warner Brothers soured on the notion of turning MIB into a joke, figuring they could reboot and regenerate revenue on the franchise while staying within its own established universe. Given Gray's failed film, they figured wrong. No doubt, a Men In Black comedy with Channing Tatum and Jonah Hill would've been automatic box office gold. This one is a dud.

In order to milk more money out of this franchise, it's looking like they will have to reboot again. Let's go with the 21 Jump Street idea, Warner Brothers. You really have nothing left to lose on the MIB front at this point.

Godzilla semi-sucking, X-Men bombing and now this. This summer movie season has been a cruel, unforgiving place for big movie franchises. ■