A Shining Star on Grant

No, it’s not the Christmas beacon. It’s a piece of public art. 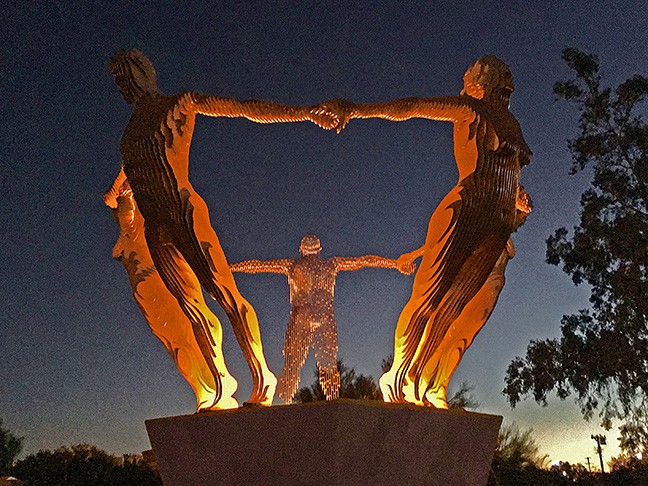 On a cold December night, moonless and dark, something glows in the shadows at the edge of Grand Road.

Five sculpted steel dancers are poised in a circle on a pedestal high above the rocky ground, bathed in a golden light. The dancers lean outward from the circle, pushing from their tiptoes, holding hands.

Those clasped hands are the only things that keep them aloft. If even one dancer were to loosen their grasp, all five would go tumbling down.

"It's beautiful," says a man passing by, gazing up at the sculpture admiringly. "That's what we need now. Community."

That's exactly the idea the piece's creators, Simon Donovan and Ben Olmstead, were aiming for. They even called the work "Unity."

Last summer, when the final touches were still being made—dark green paint on the concrete pedestal, lighting, a bit of landscaping in the barren dirt at the side of the road—I paid a visit to the site with the two artists.

"This one's about community," Donovan said then. "An individual figure leaning out on their toes would fall, but with trust and cooperation, they can go forward."

But the public art piece is also about beauty. Located just east of Third Avenue on the south side of Grant, the 10-foot-tall figures shimmer gold and orange by night, silver by day. Amidst the tumult of traffic and signs and telephone wires and fast-food joints at the nearby intersection of First and Grant, "Unity" is a grace note in the streetscape, a gift to harried commuters.

Donovan, best known for his 2003 Diamondback Bridge on Broadway, and Olmstead, who claims the great landscape architect Frederick Law Olmsted as a distant relative, teamed up as public art partners around 2007.

They've worked a lot outside of town—a recent Dallas project features three human figures flying inside the Love Field airport terminal—but Tucson can boast their "Mare & Foal on Houghton Road," a collaboration with the late Lauri Slenning, and a life-sized elephant sculpture at Reid Park Zoo.

The design of "Unity" was inspired by "The Dance" from 1910, a Matisse masterpiece picturing five figures, both male and female, dancing in a circle on a mound of green grass. But Tucson gets some of the credit for the idea. Donovan had been going to UA Dance performances, and the dancers' movements got him to thinking about Matisse's painting.

When he and Olmstead won the commission from the Tucson Dept. of Transportation and the Pima Association of Government to make a public art piece for the Grant Road widening, they turned to UA dancers to make the Matisse idea come to life. The pair enlisted three women and two men in a modern dance class taught by prof Doug Nielsen, now retired.

The five dancers experimented with versions of the hand-held circle in the studio; photographer Rebecca Horton shot images.

Their bodies, young and strong, are now immortalized in steel along Grant Road. But the transition from dance improvisation to finished sculpture was a long and complicated process that began with high-tech computer graphics.

Instead of being made of solid steel, computer wizardry allowed the figures to be composed of airy planes of steel, each one separated by an inch of space that allows light to shine through. Those intervals between the hundreds of laser-cut metal plates in the sculpture also create a magical optical illusion: the dancers seem to vanish into thin air, and then re-appear, like so many Ariel sprites.

If you look at a dancer head on, you see right through her. But if you change your vantage point, her gleaming metal body reappears, solid and strong.

The dancers are naked, but their bodies are simplified; breasts and genitals are not detailed. The artists heard only little pushback on social media about the nudity, though one wag passing by, Olmstead remembers, shouted out that with all the public money the statues cost, "they could have had clothes."

The tab for the five-year-long project was $153,000, determined by the rule that requires public construction projects to devote 1 percent of their budgets to art. But that cash didn't go only to the artists.

It paid a small army of Tucson workers, from the computer wiz to fabricators, welders, 3-D designers and structural engineers. Local industrial space and equipment were rented, local materials purchased and a local professional driver was hired to take the sculpture on its precarious journey from the work space on the Southside to its unlikely resting place on Grant Road.

"So much of the money goes back into the local community," Donovan says.

The artists are grateful that they get to work fulltime as artists, he adds, and grateful to Tucson "for giving us a chance." "Tucson is great for public art. Some (local artists) now have national careers. It's a great incubator for public art."

And a great place to get a bit of Matisse—and Donovan and Olmstead—in the improbable precincts of Grant Road.