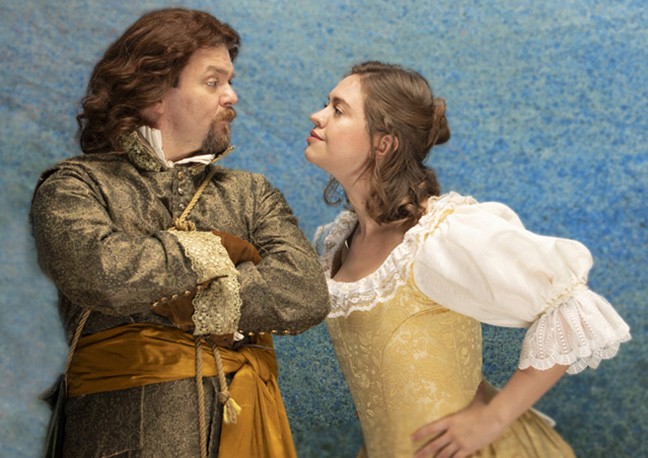 Much Ado About Nothing

The Rogue Theatre has lofty goals as they approach each season of plays, and they relish bringing us classics as well as newer scripts. Some might argue that there are few more classy classics than the ever-challenging works of the English Bard himself. Now in their 14th season, The Rogue has brought us William Shakespeare's MacBeth, The Merchant of Venice, Richard III, Hamlet, The Tempest, The Winter's Tale and Measure for Measure, among others.

Currently they have mounted a genuinely delightful Much Ado About Nothing, directed by Joseph McGrath, one of Rogue's founders and its artistic director. It has just the right measures of complicated but mostly light-hearted storytelling, characters that make us both laugh and cringe and familiar themes tackled with fresh energy.

The play itself is typical of Shakespearean storytelling prowess, with its twisting tales of families, halting courtships, mistaken identities, gossip, troublemakers, jealousy and deception. You get your money's worth with this guy.

Here we are in Messina, where Leonato (Harold Dixon) is a respected nobleman with a fetching daughter of marrying age. The household is welcoming soldiers home from battle, including Don Pedro (Aaron Shand) and his slightly smart-ass friend Benedick (Ryan Parker Knox). Oh, Benedick is a respectable guy, but he's a very clever one with teasing words and ways. He also declares himself to be a dedicated bachelor.

Don Claudio (Hunter Hnat) is one of those returning, and he becomes quite smitten with Hero (Bryn Booth), daughter of Leonato. Leonato's brother Antonio (David Greenwood) is the dad of a very intelligent and independent young woman, Beatrice (Holly Griffith), who has a smart and saucy way with words to complement a rather willful manner. While Claudio and Hero develop their devotion, Benedick and Beatrice, having known each other before the war, appear at odds with one another, teasing and insulting one another with wit and wordplay. However, their friends sense that their attitudes and actions actually conceal an attraction that lies beneath their verbal sparring, and they determine to try to make them a match. So there's Claudio and Hero planning to declare their devotion in a wedding to take place shortly, as Benedick and Beatrice do their strange mating dance.

But, wouldn't you know it? There's a bad guy who is not having any of the fun his fellow townsfolk are. He is Don John (Christopher Johnson), the illegitimate brother of Don Pedro, and his is a nasty temperament that makes him want to gum up the works. With the help of a couple of friends he sets up a situation in which it appears that Hero is being unfaithful to Claudio. Good Claudio is outraged when he finds out, but instead of confronting Hero seeking the truth, he decides to wait until the wedding begins, and then—bam!—lets her have it before God and everybody. She is so shocked that she faints; he storms from the scene. The wedding guests and Hero's family are pretty unnerved as well, unable to believe that Hero is the, well, slut, that Claudio makes her out to be. They figure the truth will come out, and they allow folks to think that Hero didn't just faint but actually died. (That sounds a bit familiar, Shakespeare-wise, doesn't it?) They feel confident that the truth will out, and when it does Hero can join decent society again.

Of course, the truth does get revealed. The parties who created the illusion that Hero was unfaithful to Claudio are found out and are to be punished. Claudio is grief-stricken, thinking Hero to be dead. But just as a bit of trickery had led him to believe the worst of Hero, he too becomes the subject of a joke. (Oh, those crazy folks of Messina!) But this joke, which ultimately becomes a sort of redemption for him, has a very favorable outcome, and before you can say "oh my, so much ado," lovers unite, there is a double wedding and the town celebrates.

Shakespeare has given McGrath and company plenty to work with, and they gleefully take it and run. Director, designers and actors all successfully contribute their skills, and the result is intelligent and engaging fun.

Griffith and Knox give us a lot to enjoy as they match wits and smart mouths. Director McGrath has helped these good actors find just the right tone as they play with each other, and their rather odd courtship becomes one of the most endearing aspects of the production. Although the overall tenor of the piece is very light-hearted, they in particular delight us with their wit and words, and even their physical humor. Shakespeare may propel the story with the rather nasty effects of the villainous Don John—and Johnson makes him marvelously villainous—he gives us plenty to enjoy with the evolving romance of Benedick and Beatrice. Griffith and Knox are delicious.

It's good to see Harold Dixon on the Rogue stage. The former UA theater professor brings us a respectable governor of Messina, but also one who is comfortable enough to allow some merry-making among the townsfolk and his family. In fact, most of the actors perform well, including Matt Walley, who plays Dogberry, an uneducated, physically bumbling guy prone to misspeaking.

Cynthia Meier's costumes are quite fine, helping to define the status of the characters while giving us a visual treat. McGrath's set and Josh Hemmo's lighting work very well. Live music is always integrated in Rogue's productions, and here musical direction and original music is provided by Russell Ronnebaum, who is joined on piano by Samantha Bounkeua on violin.

The Rogue gives us a happy new year's wish with Much Ado About Nothing. It's done well with great spirit. And most pleasingly, it's just great, good fun.