Brad Pitt's performance in 'Moneyball' is a home run

Moneyball is one of the best baseball movies ever made—even though very little of the physical game is played within it.

It's the story of Oakland Athletics general manager Billy Beane, and how he used computers instead of money to build a championship-level baseball team while teams in bigger markets outspent him ... really outspent him.

Brad Pitt plays Beane in a funny, understated and savvy performance. Couple his work here with his excellent performance in this year's The Tree of Life, and you are possibly looking at the best year of his career.

As a Mets fan, I remember Beane as a player. He was supposed to be the Next Big Thing in New York, playing center field in an outfield that included Darryl Strawberry. However, the guy was a bust, and after a few years on several teams (one of them the Oakland A's), he hung up his glove.

He became a scout and worked himself up into the front office, eventually becoming the general manager of the Oakland A's, putting together a quality team that included Jason Giambi, Jason Isringhausen and Johnny Damon. Due to a slashed budget, the trio left Oakland after a visit to the playoffs, and Beane had to find a way to replace them.

What's depicted in this movie isn't exactly what happened, but it is pretty close. Beane hires Peter Brand (Jonah Hill), a Yale graduate with a degree in economics who has a thing for baseball stats. By compiling lists of players on computers and ranking them by pure run production or on-base percentage, the two put together a statistically sound team for relatively little money. Players being shunned by other teams, like David Justice (Stephen Bishop) and Scott Hatteberg (Chris Pratt), find themselves getting offers from the new Oakland A's.

For those of you who don't follow baseball and don't want the movie wrecked for you, I won't go into many details about the first season of "moneyball" that Beane put together. I'll just say his little experiment had some very interesting results.

Pitt does a nice job of capturing the confusion and frustration that Beane must've been feeling during the 2002 season. He has a knack for being very funny in films that aren't actually comedies (Inglourious Basterds is a good example of that), and he gets a lot of laughs here, especially in his handling of party-boy Jeremy Giambi (Nick Porrazzo). Yes, one of the things Beane did to replace Jason Giambi was bring in his brother.

The film's portrayal of field manager Art Howe (by Philip Seymour Hoffman, who aptly captures Howe's utter dullness) is not flattering. In his defense, Howe managed a couple of good years for the Athletics before the experimental 2002 season, his last with the team. He went on to manage the New York Mets in 2003, ushering in one of the darkest periods in Mets history. (I know this has nothing to do with the movie, but as a Mets fan, I just wanted to get a jab in. I HATE YOU, ART HOWE!)

Hill, who often is cast as a motor-mouthed wisecracker, gets to play somebody who is quiet and wise with Brand. Brand is actually based upon former A's assistant GM Paul DePodesta, who requested his name not be used in the film.

Sure, director Bennett Miller and his screenwriters cut a few corners and Hollywood-ized this already-crazy story, but history does tell us that the A's under Beane have put some pretty amazing teams on the field with paltry budgets, contending with the likes of the New York Yankees and Boston Red Sox. Both of those teams have had prominent former A's players on their rosters; in a sense, they've used the A's like a farm system.

While the A's (who still employ Beane) haven't really done much since 2006—arguably because a lot of teams have started beating Beane at his own game—their 2002 achievement was astonishing, and Moneyball captures all of its nuttiness. It's a great baseball movie, with very few onscreen base hits, no cornfields and no exploding light towers. Instead, it features a couple of computers and Brad Pitt acting up a storm.

Moneyball is not showing in any theaters in the area. 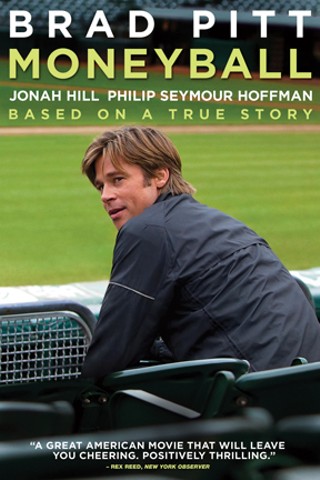