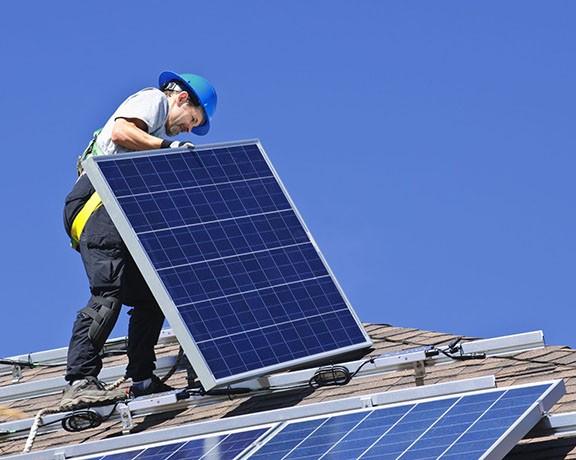 File Photo
Would solar lead to lower energy bills in the future?
Tucson electric power is seeking a rate hike this year, which the utility says is necessary as part of a shift toward cleaner energy.

But some environmental groups complain the plan doesn't do enough to end the reliance on fossil fuels, while local ratepayers are forced to prop it up.

The Arizona Corporation Commission, which will decide whether to approve TEP's proposal, will hold a final public meeting for input on the rate hikes at 6 p.m. on Tuesday, Jan. 28, at the ACC's Tucson office, 400 W. Congress St.

After feedback from commissioners and other stakeholders, the company lowered its proposal to a 7 percent increase, or an extra $6.80 per month charged to the average customer.

On top of those estimated increases, the company also proposed a $2 increase to their monthly residential customer charge.

If the Corporation Commission approves the rate hikes, they will hit customers by May 1 at the latest.

The utility says one reason for a rate increase is an expanding customer base. TEP spokesperson Joseph Barrios said the company added about 9,000 new customers last year, and the peak demand for those customers has risen about 9 percent. The last time TEP increased their utility rate was in 2017, when the average electric bill increased by $8.50.

The local chapter of the Sierra Club opposes TEP's proposal and urged the ACC to reject it during a public meeting on Jan. 13.

The environmental group called for a plan that incorporates more renewable energy sources, such as solar panels and wind farms, instead of investing in more gas-fired technology. Catalina Ross, energy program coordinator for the local Sierra Club, says ratepayers shouldn't have to accept increases in their bills while TEP is still using technology that contributes to climate change.

Ross bases that argument on an Arizona Coal Plant Valuation Study produced by Strategen, a clean-energy consulting firm based in Berkeley, California. In 2019, Strategen found that if all 11 coal units in Arizona were replaced with solar and battery storage by 2023, it would save ratepayers $3.5 billion (in today's dollars) state-wide between 2023 and 2050. TEP and its customers would save $326 million over the same time period if Unit 1 of the Springerville coal-fired power plant was replaced with solar power and storage capacity.

"While there is a clear intention to move away from coal-burning generation, the pace is not fast enough to fully capture the economic benefits of this transition, and Arizona ratepayers might end up paying more than they should to keep expensive coal units operating for several more decades," the study reads.

Barrios said Strategen's study was flawed because it assumed all the new wind and solar facilities could be purchased or invested in with a 30 percent federal tax credit, which reduces the cost. But he says that tax credit is now down to 26 percent, and he doubts TEP would receive a full tax credit.

"Also, it doesn't address how those plant closures would affect the cost of energy," he said. "For example, if all of those plants were to close, it would drive wholesale energy prices up, but the study doesn't account for those higher costs of purchasing power from other sources."

New Mexico has committed to 100 percent carbon-free electricity by 2045, the study says, and the Colorado Energy Plan aims for nearly 55 percent renewable energy in the state by 2026.

Barrios says TEP is doing its part to move toward cleaner technologies. The utility will retire two old steam generators and replace them with 10 smaller, more flexible and efficient reciprocating internal combustion engines (also known as RICE units) that are powered by natural gas.

"One of the advantages of the RICE units is that because you can ramp up production quickly and ramp down, they are a great complement for all the wind and solar we're going to be bringing online here very shortly," Barrios said. TEP studied a variety of options and concluded that the RICE units would cost half as much as a battery-storage while being more reliable, according to Barrios.

TEP has five RICE units in service now, and construction on the other five is expected to be completed within the next four months.

Barrios says TEP's long-term goals are more similar to Sierra Club than it may seem. They both want more wind and solar, and so do TEP's customers."

But an immediate switch to wind and solar energy sources would drive up rates and put energy reliability into question, Barrios says.

"We have to be able to make sure that the service we're providing to our customers remains high," he said. "We have no plans for any new coal facilities and we are actively working to reduce our (reliance) on coal-fired resources."

The company also has plans for the 550MW of natural gas combined cycle capacity they acquired within the Gila River Power Station from the Salt River Project. The Sierra Club stands in opposition to that investment as well.

"The purchase of the Gila River Unit, it really made sense for us to procure that on behalf of our customers," Barrios said. "It was an economical choice in terms of purchasing an existing plant as opposed to building a new natural gas-fired power plant and it's important to note that the cost of natural gas remains very low."

In response to a request from a commissioner, TEP provided information about two scenarios where they would have invested in solar and storage systems instead of the Gila River Unit.

While the Gila River Unit may have been the more economical decision, the Sierra Club is concerned about other effects gas-fired plants may have on communities.

"The gas units also emit SO2, which is a greenhouse gas that has major effects on asthma rates," Ross said. "But the main thing is that the (H. Wilson Sundt) plant is located in an area of Tucson that is majority people of color and 63 percent low-income residents. We have an issue of climate injustice here."

By the end of 2020, TEP is slated to have three new large renewable energy systems come online. Their Oso Grande Wind Project, located southeast of Roswell, New Mexico, will generate about 250 MW of clean power capable of servicing 100,000 homes annually, according to Barrios.

TEP's Wilmot Energy Center, capable of capturing 100 MW of solar array with a 30 MW battery, will be completed by the end of 2020 and can provide power to 35,000 homes annually. Another wind project called Borderlands Wind, located about 100 miles south of Gallup, New Mexico, is capable of producing 100 MW and should produce power for 40,000 homes annually.

"We understand the Sierra Club's position, and we are working toward achieving the same thing, perhaps not on their timeline, but it's certainly a goal of ours," Barrios said. "We want more wind and we want more solar, and we're executing a long-term plan to make that happen."