A Night At the Opera: An Ode to Stephen Sondheim, to Arizona Art and to Reading Emails More Carefully 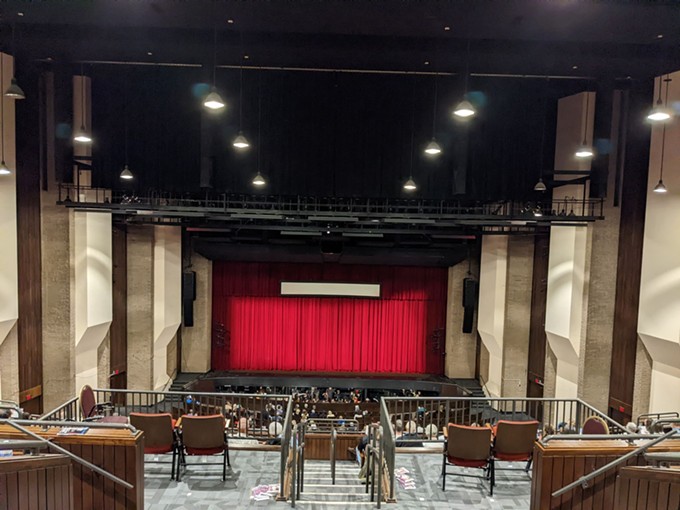 I was a theater kid growing up, which means I was annoying and that I have seen The Sound of Music, like, 15 times. It also means I was saddened when Stephen Sondheim, one of the most influential and important musical theater composers of all time, died in November 2021. He’s the type of person you forget is going to die like the other humans. He won eight Tony Awards, a Pulitzer Prize and a Presidential Medal of Freedom. He brought us Into the Woods, Sweeney Todd, Company and West Side Story. His work was famously complex and polyphonic, at once moving and catchy, and somehow comforting in its frank, non-saccharine portrayal of reality.

Sondheim said that there were three principles underlying all of his work: “Content Dictates Form, Less is More, and God is in the Details.” Last weekend, I saw Arizona Opera’s production of his show A Little Night Music.

Originally produced in 1973, A Little Night Music was inspired by an 1955 Ingmar Bergman film, Smiles of a Summer Night.

Bergman’s film is a fun comedy with lots of delicious drama, including a young man in love with his stepmother, old lovers reuniting and a game of Russian roulette. It’s got layers upon layers of adultery. But it also features reflections on guilt, aging, the nature of parenthood and the double-sided coin that is love and hatred. The Criterion Collection once called it “nearly perfect.”

It’s a perfect fit to be adapted by Sondheim, who is known for addressing complex, often dark, themes. Not to mention that it’s set during a Swedish summer during which the sun never fully sets—making for some lovely lighting effects on stage.

One of my favorite elements of the show is that it examines how frustrating life can be at every age: for the young (“How can I wait around for later?” asks young, melancholy Henrik. “It’s intolerable being tolerated.”), for the middle-aged (“Love’s disgusting, love’s insane. A humiliating business!” spits Charlotte, reflecting on her husband’s infidelity) and for the old (“Let us hope this lunacy’s just a trend,” laments Madame Armfeldt from her wheelchair, gesturing vaguely at the youth.)

Madame Armfeldt, the mother of one of the characters engaged in all the adultery, mostly provides wry commentary on the action. She perhaps sums it up best when she tells her granddaughter to watch for the summer night smiling three times: Once at the young, who know nothing, once at the fools, who know too little, and once at the old, who know too much.

In the spirit of this advice, I’ll use section as a brief interlude. I’m not a theater reviewer, and I’m certainly not an opera reviewer. But I was so impressed with this show: the performers, the orchestra, the costumes, the sets and lighting, the direction. I’m grateful that our community is still bursting with art even after the last two difficult years.

GOD IS IN THE DETAILS

Before we arrived, I carefully (well, I thought it was carefully) read through an email with parking instructions, which said to park in the Tucson Convention Center parking garage. As we were pulling in, I saw a couple leaving their cars wearing cowboy hats and boots. “How cool it is that Sondheim brings so many different demographics together,” I thought. “The magic of the theater!”

Waiting in line to go through metal detectors, which I did not remember the email mentioning, I slowly began realizing everyone in the vicinity was dressed in country clothing. Almost like they were dressed for a country concert. They were. The Tucson Convention Center was hosting a Justin Moore concert that evening.

We made it all the way through security and into the building, with me starting to think, “Maybe there are multiple concert halls or arenas within the convention center?” before we had to admit we were in the wrong place. Directions, as readers of my previous columns may have learned, are not my strong point. A Little Night Music was playing at Tucson Music Hall, which was, blessedly, right next door. We walked over and made it to the show right on time. In fact, an attendant said some people had the opposite problem: A few men in cowboy hats had arrived at the Tucson Music Hall looking confused.

Sondheim, as I’ve often found him to be, was right about the details.