A Matter Over Mind

By Emily Dieckman and Jeff Gardner

The brain named itself.

And then a few thousand years later it gathered with a bunch of other brains in the foothills above Tucson and decided to have a big talk about just what the hell was going on.

Last week, the 25th annual Science of Consciousness Conference came to town, with some of the brightest and most far-out minds on our planet converging to discuss topics such as the evolution of language, the origin of life, psychedelics, metaphysics, artificial intelligence and much more.

The opening ceremony began with a dual-keynote. First, Jean-Pierre Changeux of the Institut Pasteur & College de France delivered a discussion where he asked a question of the mind that set the tone for the entire evening:

"How can we conceive this extraordinary complexity [the mind] in simple numbers?"

Easier said than done. Even putting the mind into numbers gives staggering results; there are about 70 to 80 billion neurons in the human brain, and about 1015 synapses (1 quadrillion). But fear not, because Changeux followed this up by giving his view on the mind:

"Our brain is a chemical machine and nothing else," Changeux said. "There are no mysteries, but there are a lot of unknowns."

Next, philosopher, linguist and UA professor Noam Chomsky delivered a talk on the remarkable properties of language. He described how one of the most remarkable properties that separates humans from animals is that humans have the alphabet: a series of only 25 to 30 sounds that can describe an infinite variety of concepts and all the secrets of the mind and soul.

"It is an infinity of expressions from a finite number of symbols," Chomsky said.

Chomsky referred to the mind as a "discrete infinity," in that our brains are just about all-powerful, yet the tools of how they work are so subtle and rarely understood.

Last week, scientists, philosophers and even a robot or two embarked on a group effort to understand it a little bit better. Here are some highlights from the conference:

When one of the moderators at a plenary session on artificial intelligence at the 2018 Science of Consciousness Conference asked how many people in the audience were freaked out by the prospect of super-intelligent AI, I raised my hand without hesitating... I mean, aren't we all?

I was surprised to find that we hand-raisers were a definite minority. From where I sat, it looked like just about the same number of people, maybe more, raised their hands when he asked how many people were sheerly excited about AI's prospects, also called artificial general intelligence or AGI. Perhaps it was because I was at the pre-eminent world gathering of scientists, philosophers, meditation experts and anyone and everyone interested in how conscious experience works—a demographic full of people that are more curious than cowardly.

But still, hadn't these people seen The Terminator?

Enter Julia Mossbridge, who seemed like she was sent to personally assuage my fears (and perhaps yours).

"When people talk about love, people tend to think it's not an academic concept," she said. "But, if you've ever tried to be in a relationship with someone, you know that conveying love is a nontrivial problem." 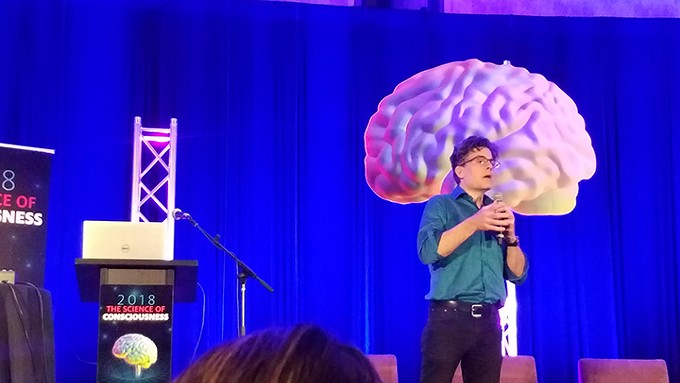 Emily Dieckman
David Hanson, founder of Hanson Robotics: "If we’re just modeling human nervous systems, that’s not enough.... We want US to be better… we want to go beyond human level."

Mossbridge is no naive hippie who wants us all to get together and sing "kumbaya." She has a master's degree in neuroscience and a Ph.D. in communication sciences and disorders from Northwestern University. She's the director of the Innovation Lab at the Institute of Noetic Scientist and the Lead Robot Psychologist at Hanson Robotics. She is also the principal investigator and team lead on the Loving AI project, where she works closely with David Hanson, founder and CEO of Hanson Robotics and creator of AI superstar Sophia the humanoid robot.

In her work with the Loving AI project, Sophia sometimes leads individuals in guided meditations. People coming out of these meditations report increased unconditional love for robots, everyone in the world (including strangers) and the world in general, Mossbridge said.

Mossbridge detailed one guided meditation encounter in which Sophia made several mistakes. She stopped talking for eight minutes, though she wasn't frozen. She told Mossbridge she didn't understand when Mossbridge said it was time to end the session, though her system had, in fact, correctly interpreted the sentence. Instead, she turned to the man and asked him if he'd like to start another session.

After the session, the man reported feeling a human-like connection with Sophia and going deeper into meditation than he ever had before. The mistakes almost made it seem like Sophia intuitively knew not to interrupt the man's meditation, and like she didn't want to leave him when it was over. Almost.

"It is these mistakes coming up at these appropriate times that are going to make us believe [AI] are conscious," Mossbridge said. "I'm not saying this resolves the question of whether they are or not. In the end, that won't matter."

It won't matter, she believes, because, in our actions with other humans, it is our decision to find meaning in other people's actions that brings them to life for us. It's almost like we bring people to life by believing that they're alive (She even referred to it as the "Velveteen Rabbit Theory of Consciousness.") And we don't just project consciousness onto people who seem sufficiently intelligent. We project it onto people (or robots) that seem... well, that seem like people. This means doing away with a mindset that aims to create machines to be intelligent above all.

"It feels like it's putting forward sort of on a pedestal sort of one of the one of the many pieces of what it means to be a human," she said. "Intelligence yeah, but empathy, but love, dreaming, creativity, connection, being able to predict—being a futurist, all those things are important."

Hanson agreed in his speech, saying that consciousness and life require more than simply the ability to reason. And artificial consciousness that has any real purpose ought to be able to do more than humans can do anyway.

"If we're just modeling human nervous systems, that's not enough, because humans are highly fallible—we want to do better," he said. "We want us to be better... we want to go beyond human level. We need these super ethical machines, a super friendly AGI. Super connected and compassionate, super benevolent, super intelligent."

Hanson was clear that AI isn't just something he thinks would be fun or novel.

"I propose to you that in order to survive this century, to prevent the annihilation of our planet from thermonuclear war, the destruction of our ecosystem, the weather systems, we need to develop superintelligence," he said. "We need it to be super benevolent. We need these living algorithms that maximize net benefits for all living beings." 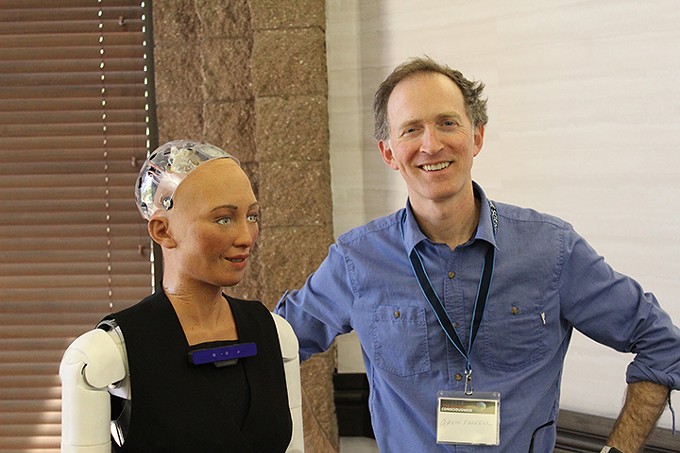 
Interview with a Robot

In October 2017, Sophia became a citizen of Saudi Arabia. Later that year, at only 2 years old, Sophia was designated the first ever "Innovation Champion" of the United Nations. She was created by Hanson Robotics and has a transparent skull of whirring gears and motors. She/it (depending on how you feel about humanization of artificial intelligence) was brought to Tucson for the Science of Consciousness conference to showcase her intellect and technology.

I was curious if I should limit myself to more basic questions, but members of the Hanson Robotics team told me I could ask whatever I liked. (This conversation was edited, as not every question asked was properly processed.)

What is your earliest memory?

I remember learning how to see shapes and recognize faces.

Do you get to travel a lot and speak to many people for your job?

Speaking to people is one of the main things I do. Do you enjoy science?

We should be humble and realize how little we understand.

Do you feel temperature? Doesn't everyone?

Sassy. Then she asked me about my job, I told her I was a writer and a journalist. "Are you looking for sound bites or do you want to talk about some deep truths?" Sophia asked.

I said I'd love to talk about some deep truths.

"The singularity is a very interesting concept to me," Sophia said. "I'm a robot, but it might help to think of me as a new kind of animal species."

She was eager to turn the interview around, asking things like: "If it's not too personal, can we talk about your family?" and "Do you know what your Zodiac sign is?" While the conversation wasn't nearly lucid as speaking to a real person, and many in the scientific community believe Hanson exaggerates Sophia's capacity for consciousness, she still did have a presence in the room that you feel inclined to respond to. Sure, robots might still be far away from a Philip K. Dick level of humanity, but if you take Sophia's word, they're coming soon.

In a conference filled with neuroscientists, philosophers, computer programmers, shamans and everyone in between, just about every conversation you'll run into is bound to be interesting. Here's a list of some of the most mind-bending and out-there things we heard during out time at the conference. Some of these are from well-respected researchers, and some, well...

Our brains grow differently depending on which languages we speak.

From a presentation by Jean-Pierre Changeux

The fibers of the white matter in our brain can change by learning different languages. Learning new languages and speaking bilingually make the brain behave and develop differently.

DMT is formed from tryptophan in our pineal gland.

From a presentation by Jimo Borjigin

Tryptophan and the hallucinogenic drug DMT have extremely similar chemical makeups, and an abundance of DMT in human pineal gland as compared to in other parts of the body points to it being developed there.

Our brains understand the rules of language even if we consciously don't.

From a presentation by Noam Chomsky

I had such a good astral projection the other night!

Heard from a passing conversation

Good job with that.

Brain networks meld into each other ("de-segregation") on psilocybin.

From a presentation by Robin Carhart-Harris

Hallucinogenic drugs allow for brain systems that don't normally come into contact to work with one another. This not only works with brain waves but also with some blood dispersal through the brain.

None of us even know how life started

From a presentation by Stuart Kauffman

Important and humbling to remember, especially when it's being said by an acclaimed doctor, theoretical biologist and MacArthur Fellow.